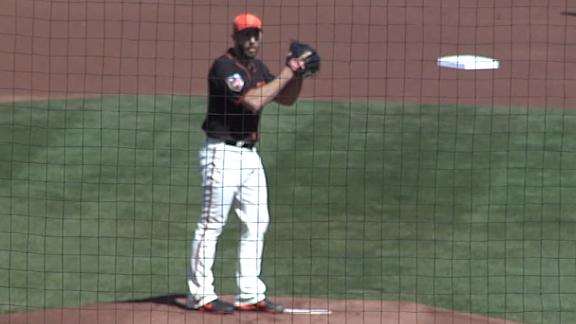 SCOTTSDALE, Ariz. -- The first man to bat against San Francisco Giants ace Madison Bumgarner Sunday hit a wind-aided, opposite-field home run. Bumgarner was overpowering after that in his spring training debut against the Chicago Cubs, even if he was lacking some sharpness.

The 2014 World Series MVP got all five outs with strikeouts and allowed two earned runs on four hits in 1 innings in the Cubs' 12-10 win over the Giants. He left the game with two runners on base and both scored, inflating his final line.

"Felt good physically, that's really all I'm looking for," Bumgarner said after his outing. "Every time I tried to get on game speed, I just missed. I was just a touch off of that, which is to be expected I guess, this time of year. Stuff felt fine, besides that, just command. Stuff was a little off. Getting that dialed in, that's why we're here."

Bumgarner shook off Ian Happ's solo shot on a full count and struck out the side in the first inning. In between strikeouts he gave up a Kyle Schwarber single and watched Schwarber steal two bases on him, but a called third strike on the outside corner to Efren Navarro ended the inning.

"I thought it was going to be an out coming off the bat. Guess he hit it harder than I thought," Bumgarner said of the homer. "Doesn't matter to me either way."

Catcher Buster Posey said Bumgarner might have been a little too "amped up." But the pitches looked crisp.

Bumgarner reached his pitch limit in the second inning and was removed.

"Location-wise, it wasn't what you would expect out of him, but first outing of the spring, it's going to happen," Posey said.

Bumgarner's 2017 season was interrupted by a dirt bike accident during an off day in Colorado on April 20. He suffered bruised ribs and a sprained AC joint, and missed nearly three months.

After six straight seasons with double-digit wins, more than 200 innings and 30-plus starts, Bumgarner went 4-9 in 17 starts and threw just 111 innings in 2017.

"Last year wouldn't change how I felt about doing that," Bumgarner said of getting back to his typical innings and starts counts. "I always want to do that."

Bumgarner said he'd be fine pitching three times in the first nine games of the regular season, which could be the case based on him getting a normal four days' rest in between starts. That would include the season opener in Los Angeles -- for which he has already been named the Opening Day starter -- then the Giants' home opener against Seattle and after that, a home game against the Dodgers on April 8.

"I don't think it's being pushed," Bumgarner said. "Whatever they think's best. There's no difference throwing on four days' rest or five days' rest, to me."