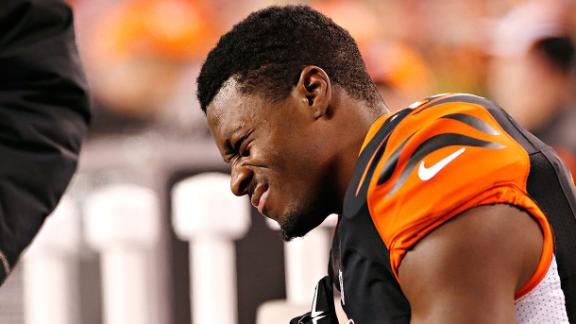 The Pro Bowl wideout was sidelined for a second time this week after dealing with a concussion he suffered in last Sunday's loss in the regular-season finale at Pittsburgh.

He is listed as doubtful on the team's official injury report.

A team source said Thursday that Green was scheduled to meet with a neuropsychologist on Friday and an independent neurologist on Saturday as part of the NFL's concussion protocol. If he clears their evaluations, he will be permitted to play in Sunday afternoon's AFC wild-card game against the Indianapolis Colts.

The team confirmed Friday he was still under the protocol.

"I can't concern myself about it," coach Marvin Lewis said about the protocol after practice. "Just when he gets cleared, he'll be out there ready to go, full speed and playing."

Asked if anything changed between Thursday and Friday, Lewis said, "Nope."

Green was seen in a practice jersey Thursday, mostly standing around and watching his teammates as they went through stretching and position drills during the open portion of the workout. On Friday, he continued his static observations, but this time wearing a Bengals sweatshirt.

Green suffered the concussion after catching a first-down pass in the fourth quarter Sunday night. Just after the reception, he was stripped of the ball before getting hit in the head by Steelers safety Mike Mitchell.

In addition to the head injury, Green is fighting through a deep biceps bruise he suffered when he took a helmet to his arm during a game the previous Monday. Green also missed parts of four games this season because of a toe injury.

Green, who was named to his fourth Pro Bowl, had two games in the regular season in which he caught at least 10 passes. He finished with 69 receptions for 1,041 yards and six touchdowns, becoming one of three receivers to have had 1,000-yard seasons each year since 2011. He and Randy Moss also are the only receivers in NFL history to have 1,000-yard seasons in each of their first four years in the league.

In three career postseason games, Green has just 13 catches on 32 targets for 161 yards and no touchdowns. Four of quarterback Andy Dalton's six playoff interceptions have come when he was targeting Green.

Green Doubtful; Bengals Businesslike
ESPN Bengals reporter Coley Harvey discusses the Bengals' business-like approach to preparing for the Colts, as well as whether wide receiver A.J. Green will be cleared to play by Sunday.

Hill Key For Bengals' Offense
Bengals reporter Coley Harvey breaks down the latest on A.J. Green and explains why Jeremy Hill will be key for Cincinnati in its wild-card matchup against the Colts.