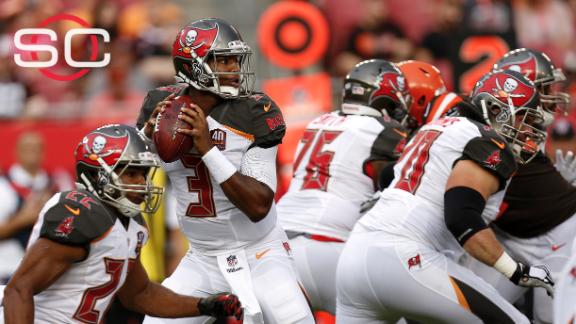 Winston rolled the ankle in the second preseason game against Cincinnati, but still played into the third quarter of Saturday night's game against Cleveland.

Winston completed 6 of 15 pass attempts for 90 yards with an interception. Koetter said the ankle is impacting Winston's play.

"A little bit," Koetter said. "It's affecting him a little bit. But he'll be ready to go. He'll be full speed by Tennessee [in the regular-season opener]. It's not anything he can't play on. Even in practice, Jameis, you can't keep him out.

"[Quarterbacks coach] Mike [Bajakian] is trying to slow the drills down on the side field and Jameis won't come out. We'll get him healthy. He's got a sprained ankle. If you've ever had one and you have to move around and cut, it can be painful."

"Pain is temporary," Winston said. "I really don't focus on that at all. I played last year at Florida State with a sprained ankle. That's the least of my worries. My job is to go out there and play quarterback and fight for the team."