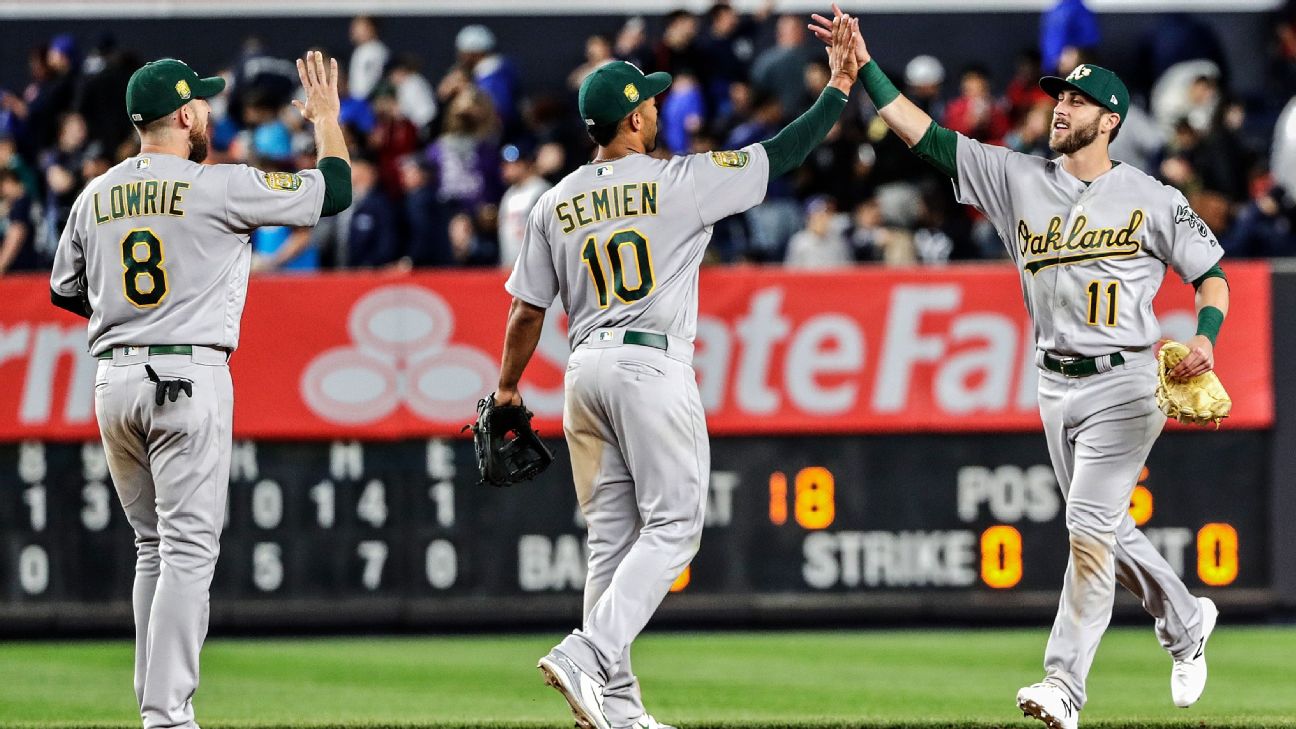 The Oakland Athletics are aware of the public perception entering their wild-card game against the New York Yankees. They're a nice little team with baseball's lowest payroll, with a home park a notch or two below decrepit and a bunch of players who could walk through any airport in America without being pestered for selfies.
They've had a terrific season, with 97 victories and a run differential of plus-139. But somebody had to make the AL playoffs besides the Red Sox, Astros, Indians and Yankees, right?

So now they go to Yankee Stadium with Liam Hendriks on the mound and a parade of relievers to follow, against a Yankees lineup that uses the right-field seats for target practice, as the sole impediment to a dream TV matchup between Boston and New York in the division series. Conventional wisdom places them somewhere between "speed bump" and "cannon fodder" in their quest to advance, but they're laughing at the preordained narrative.

Five months ago, in the heart of the Bronx, the A's proved to themselves that they can handle anything the big, bad American League East throws at them.

Ask the Oakland players, coaches or front-office members to pick a defining stretch of this season, and they reflect on a potentially daunting road trip in May. After splitting six games with the Yankees and Red Sox, the A's swept a four-game series at Rogers Centre against a Toronto team playing competitive baseball at the time. A cross-country swing that could have crushed their spirits culminated in a 7-3 boost to their self-esteem.

"On the flight back home, I remember sitting there going, 'We're actually a pretty damn good team here. We can play a little bit. We might have a shot at doing something,'" said catcher Jonathan Lucroy. "It started snowballing from there, and we got better and better and better."

The A's overtook Seattle for the AL's fifth postseason berth in early August, and the only thing passing for suspense down the stretch was their bid to post a better record than New York and earn the right to play the wild card at Oakland Coliseum.

Although that would have been nice, the A's never felt a sense of desperation to host the wild-card game because they're road warriors at heart. Their 47-34 road record is a tick below their 50-31 mark in Oakland, and they lead the majors in runs, homers, OPS and total bases on the road. They've gone 39-22 on the road since an 8-12 start.

"Usually, one of the last things a young team does to become good is learn how to win on the road, and this team was completely the opposite," said Oakland executive vice president Billy Beane. "We actually played better on the road than at home. For a relatively young group, there's a real sense of calm.

"I'm sure our guys would love to play the wild card in front of the fans in Oakland, but I don't think they really care where they play the game. I almost get the feeling they're saying to themselves, 'We might as well play in New York -- then we're closer to Boston.' They didn't say that to me, but that's the sense of confidence they have."

The A's are making their first postseason appearance since 2014, when they blew a 7-3 lead and suffered a crushing 9-8 loss to the Kansas City Royals in the wild-card game. Jed Lowrie is the only player left from that team, and even he took a one-year hiatus to Houston as a free agent before the A's reacquired him in a November 2015 trade. Josh Donaldson, Josh Reddick, Jon Lester and Sonny Gray are members of the 2014 Oakland team who will be suiting up for other clubs in the playoffs this month.

Beane, in his 25th year in Oakland's front office, has relied on a different mix than the one that defined the Athletics when they were annual postseason visitors in the early 2000s. While Jason Giambi, Eric Chavez, Tim Hudson, Mark Mulder and Barry Zito formed the core of a largely homegrown roster for Oakland's "Moneyball" teams, Beane and general manager David Forst subscribed to what Beane calls a more "transaction-based" model in assembling this year's team.

Khris Davis, Stephen Piscotty, Marcus Semien, Lowrie, Mark Canha, Ramon Laureano, Daniel Mengden, Sean Manaea and supercloser Blake Treinen are all trade acquisitions. Lucroy signed a one-year, $6.5 million free-agent deal in March, and the pitching staff was assembled on the fly after the A's endured a staggering run of injuries to their projected Opening Day rotation.Edwin Jackson, Trevor Cahill, Brett Anderson, Mike Fiers, Jeurys Familia, Shawn Kelley and Fernando Rodney were on other rosters or unemployed when the A's arrived for the start of spring training in Mesa, Arizona.

The A's have long prided themselves on their free-thinking approach to player evaluation and roster-building. But a lot has changed since "Moneyball" was nominated for an Oscar in 2012. The Astros lead the majors in defensive shifts, Tampa Bay is pioneering the concept of the "opener," and Gabe Kapler and the Phillies are bucking baseball convention every day in some form. When 200-inning starters are a rarity, multiposition players are the norm and established veterans are being weeded out of the game for kids just up from the farm, executives throughout baseball have had to come to grips with the changing face of roster composition.

"We have to do things a little bit differently," Beane said. "Otherwise, we're going to finish where our payroll says we should. If we end up doing things exactly like the Red Sox, we're going to be in trouble. The niche has changed over time, and we've had to evolve. Now it's more about making a lot of small moves and ultimately having them add up to something big.

"As a small-market team, it would take too long to develop a team purely through drafting and developing. You wouldn't be able to afford them pretty soon. With the squeeze on small markets to get over the hump, you're going to have to make a lot of trades."

Nevertheless, some of the old mantras still apply in Oakland. Because of their sparse resources, lack of national exposure and plumbing-impaired ballpark, the A's continue to harbor a certain us-against-the-world mentality.

"We have a chip on our shoulder," Lucroy said. "I remember coming to Oakland as a visiting player and I didn't know who the guys were on the team. You don't see the Oakland A's on TV as a visiting player. MLB doesn't market us. We don't get a lot of attention, partly because of the market we're in. We're competing with the Giants. And our stadium situation is brutal. It's the worst stadium in [baseball] for a visiting player -- worse than Wrigley, and that's saying a lot. But those are the cards we've been dealt, and we've got to make the best of it."

Regardless of venue, the A's have an approachability and an undeniable charm. During a recent series at Baltimore's Camden Yards, several Oakland players plopped down on a large sectional couch in the middle of the visitors' clubhouse and bantered back and forth as they played with their cellphones and watched sporting events on multiple TVs hanging from the ceiling. The atmosphere was more reminiscent of a college dorm on a lazy Sunday morning than a major league clubhouse during a division-title chase in September.

A small but important core of the team bonded at the developmental level.Chad Pinder, Matt Olson, Ryan Dull, Manaea and Mengden played together for first-place or championship teams in the minor leagues, andMatt Chapmanbriefly joined them with Triple-A Nashville in 2016. The lessons they learned and the bonds they formed have stuck with them in the majors.

"There's a comfortability factor," Pinder said. "When you mix in the veterans here who've taken us under their wings, it makes for a really good, positive environment. This team isn't cliquey. We all go out to dinner and hang out together. It's a very close-knit group, and I think that translates out to the field."

Manager Bob Melvin has done a masterful job of dealing with disruptions to the roster because of injuries, particularly to the pitching staff. But he has also done his share of fiddling with the everyday lineup. In Oakland's season opener against the Angels, Matt Joyce played left field and hit leadoff, and Boog Powell was in center field batting ninth. Melvin has been particularly adept at juggling the assemblage of Canha, Laureano, Nick Martini, Pinder, Joyce and Dustin Fowler in left and center.

"This is about as good a clubhouse as I've ever had," Melvin said. "I've had situations where I pinch-hit for somebody, and the guy that's getting pinch-hit for is high-fiving the pinch-hitter as he's going to home plate. I said one time to Mark Canha, 'Look, I just need a hit here. I need somebody to get on base. I don't need a homer. So it's Martini to lead off the inning.' He's like, 'I'm right there with you,' and he starts yelling for Martini. You don't see that very often."

Oakland's best players produce largely under cover of darkness. Davis leads the majors with 133 home runs since 2016, and he revels in his anonymity. Chapman is elevating new-age defensive metrics to the point of absurdity, with a fraction of the attention accorded fellow third basemen Jose Ramirez, Alex Bregman and Nolan Arenado, his former teammate at El Toro High School in Lake Forest, California.

"I didn't know who Matt Chapman was when I was on other teams," Lucroy said. "You know what? Everyone should know who Matt Chapman is. This kid is one of the best players in the league, no question in my mind. No one here is making $15 million or $20 million a year. Khris Davis is the highest-paid player in here [at $10.5 million], and nobody knows who he is. That's insanity. There are so many players here who deserve so much more credit than what they're being given.

"I want to go as deep as we can into the playoffs to show people, 'Who are the A's? Who are these guys who are beating up on people?' I don't know anybody in baseball that likes to play us."

While the playoff berth is gratifying, Lucroy and his teammates know there's a big difference between a cameo in the Bronx and an extended run through October. Is the wild-card matchup with New York a mere one-and-done or the start of Oakland's October get-acquainted tour with America? The A's have nine innings to provide the answer.