KGO
By by Cornell Barnard
SAN FRANCISCO (KGO) -- People all around the Bay Area are remembering Muhammad Ali Friday.

Ali, a true original, was the most celebrated heavyweight boxer of all time.

"My heart is so heavy," Jackson said. "A champion in the ring, a hero outside the ring, a social transformer, an anti-war prophet."

Al was last seen publicly in April looking frail and drawn. For the last 30 years, he's been afflicted by Parkinson's disease, the possible toll of so many blows to head in the ring. His fight is bringing greater awareness to the disease.


"A man who sacrificed his own dignity. Muhammad Ali has made us better," Jackson said.

"It's sad because he's somebody I've followed my whole life," she said.

Howard met Ali at a book signing in Berkeley in the 90s, but she never forgot how the boxing legend commanded the room.

"I saw him and I went, wow, took my breath away," Howard said.

Ali's life led Howard to her own career in pro-boxing and kickboxing. She learned a lot from the man who invented self-promotion.

RELATED: Muhammad Ali, who riveted the world as 'The Greatest,' dies

"He was trying to draw people in, and did a great job," she said.

Reaction to Ali's death was quick across the Bay Area.

"I think His boisterous character played off well and I see him as an influence to the world," said San Francisco resident Stephen Sacks.

"It was sad to see his quality of life diminished in the last couple of decades," said Laura Varga of Burlingame.

"I can recall my childhood. He became a hero, now in an era where there's not many heroes anymore," said Robert Houston of Sacramento.

A boxer and legend, forever.

RIP @muhammadali, a legend who transcended sport and was a true champion for all. #thegreatest #MuhammadAli pic.twitter.com/vjmXlXaHip

God came for his champion. So long great one. @MuhammadAli #TheGreatest #RIP pic.twitter.com/jhXyqOuabi

"I am the GREATEST!"

Ten quotes from the late Muhammad Ali that will last forever: https://t.co/oSPfXVbaBA pic.twitter.com/0ChsL47DDp

Today we lost a boxer, activists, poet & the conscience of a nation! Meeting him was one of the highlights of my life! #RIPAli

Muhammad Ali's family says his funeral will be held in his hometown of Louisville, KY. https://t.co/90zTWZqybC pic.twitter.com/srvazFWvqr

Rest in peace: Boxing legend #MuhammadAli has died at the age of 74. https://t.co/lezXk0ayro pic.twitter.com/N1g7rrdJSg

#BREAKING: Boxing legend Muhammad Ali has died at the age of 74, according to ABC News. https://t.co/JG4WWK7hlB pic.twitter.com/MQtgBBhOTX

The Greatest is gone ... but a timeless image lives forever.

Muhammad Ali, "The Greatest," has died at the age of 74. pic.twitter.com/xoR8EqRl5d 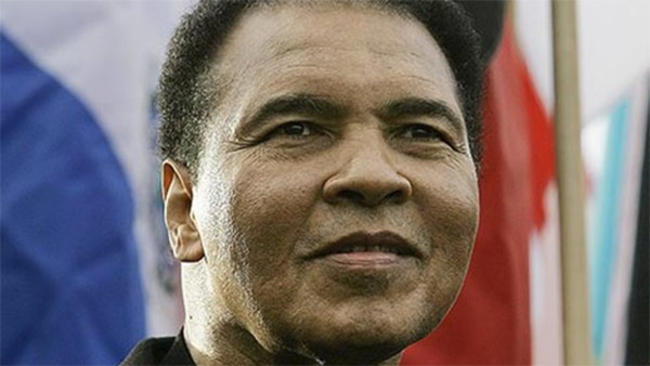 Muhammad Ali, who riveted the world as 'The Greatest,' dies