Blandino: Clock should have stopped on Sammy Watkins' final catch 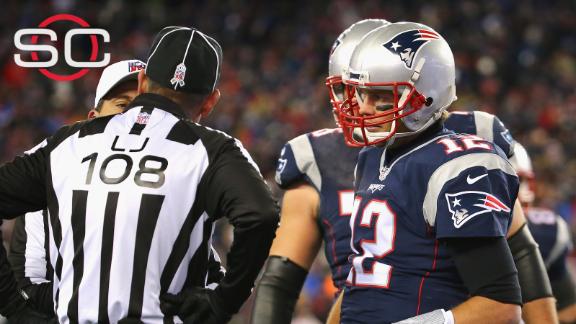 The NFL has acknowledged a second officiating mistake from Monday night's game between the New England Patriots and Buffalo Bills.

Speaking to NFL Network, vice president of officiating Dean Blandino said that Bills receiver Sammy Watkins should have been ruled out of bounds on the game's final play. Had the correct ruling been made, the Bills would have had one final opportunity to score in their 20-13 loss.

On the play, Watkins tried to roll out of bounds at the Bills' 48-yard line after catching a 16-yard pass from quarterback Tyrod Taylor.

Referee Gene Steratore told a pool reporter that head linesman Ed Walker judged Watkins to be giving himself up in bounds, prompting Walker's decision to wind the clock. Blandino, however, said a player in Watkins' position can go out of bounds and stop the clock as long as he is not contacted first by the defense.

"It's a judgment call," Blandino said. "In the head linesman's judgment, he felt that the player gave himself up. ... A player can certainly give himself up -- a runner going to the ground and making no attempt to advance -- but you certainly want to give that player the opportunity to get out of bounds, especially inside of two minutes.

On Wednesday, when he was told the NFL admitted the wrong call was made on Watkins' catch, Bills coach Rex Ryan said mistakes happen.

"I think the officials tried to do the best job that they could do. I don't think there's any doubt about that," he said.

Earlier this week, Blandino explained that line judge Gary Arthur made a mistake when he "lost track of the football" in the third quarter, blowing his whistle inadvertently to stop short a play that ultimately resulted in a 14-yard reception by the Patriots' Danny Amendola.

Steratore ruled that Arthur blew his whistle after Amendola made the catch. The whistle was clearly audible on the ESPN broadcast when the ball was in the air, in which case the reception should have been negated. Blandino said on the NFL Network that the timing of the whistle and reception was "very close."