Blow to 49ers QB C.J. Beathard, among other hits, led to Niners-Cardinals fray 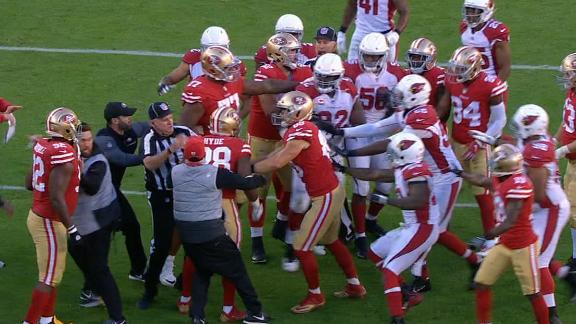 SANTA CLARA, Calif. -- By the official stat book, San Francisco 49ers quarterback C.J. Beathard took 16 hits from the Arizona Cardinals in Sunday's loss. But it was one that didn't count toward that total that set off a brief fight between the two teams and resulted in the ejection of three players.

With 3 minutes, 29 seconds left in the Niners' 20-10 loss to Arizona, Beathard scrambled off left tackle for a gain of 10 yards, opting to slide in an effort to avoid contact. Instead, Cardinals safety Antoine Bethea came crashing in, delivering a blow to Beathard's head and drawing a flag for unnecessary roughness.

Angered by the hit and, according to coach Kyle Shanahan, some similar hits to the head that went uncalled a little earlier, a handful of 49ers rushed to Beathard's aide. In the middle of the skirmish, Niners running back Carlos Hyde and Cardinals defensive lineman Frostee Rucker squared up and began shoving each other and throwing punches. Elsewhere, Arizona linebacker Haason Reddick was also involved in escalating the tensions.

When the dust settled, Bethea was penalized 15 yards for the late hit while Hyde, Rucker and Reddick were ejected and their penalties offset.

Shanahan said he was proud of the support his team showed its rookie quarterback even if it resulted in Hyde's dismissal.

"There's a very fine line," Shanahan said. "I want our guys to be smart. I know Carlos is the one who ended up getting ejected. I didn't see Carlos throw a punch. I don't know exactly what he did. I did see him get punches thrown at him. I did see him get knocked over a couple times.

"I really loved how he went and got our quarterback's back. I thought our quarterback got a couple helmets to the head when he was in the pocket a few plays before and then he ended up scrambling and sliding and he got one again and I think our players had had enough."

Arizona coach Bruce Arians, meanwhile, was unfazed by the scuffle.

"Crap happens," Arians said. "It's not college. You don't get kicked out again next week."

Beathard was able to finish the game despite taking so many hits, going 24-of-51 for 294 yards and an interception for a passer rating of 57.1.

Like Shanahan, Beathard expressed appreciation for Hyde and his teammates coming to protect him. "They had my back and I knew they would," Beathard said. "Guys like Carlos, it stinks that he got ejected but it shows he's got my back and I really appreciate that. And so does all the other guys as well."

Despite all the hits he took, both in and out of the pocket, Beathard said the worst pain come from something where he wasn't even tackled.

"The most painful hit wasn't even really a hit, it was when I was throwing," Beathard said. "I hit somebody's helmet with my thumb. That was the most painful thing."