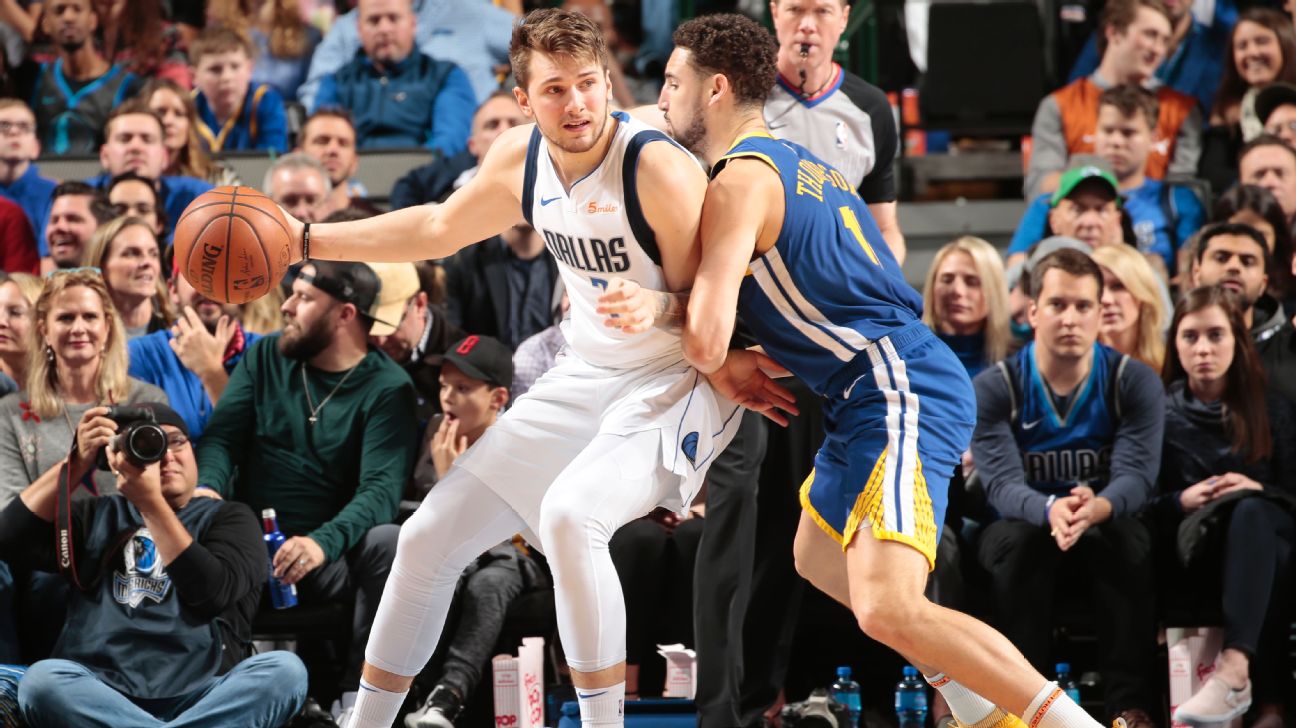 DALLAS -- The Golden State Warriors believe that Dallas Mavericks rookie Luka Doncic is not only an All-Star-caliber player but also a superstar in the making. Even on a night whenStephen Curry scored 48 points and hit 11 3-pointers in a 119-114 win over the Mavericks, it was Doncic's promise that was a large topic of postgame conversation for the back-to-back NBA champions.

"He's unbelievable," Curry said of Doncic. "You can tell he's just experienced in terms of playing high-level basketball. A guy that's always at his own pace. I'm sure he had heard all the doubters and people talking about his game who really didn't know much about him, and he's made himself known for sure. It's fun to watch in terms of the future of the league."

The Warriors have been singing Doncic's praises all season, having already seen him three times this season, but it was Warriors coach Steve Kerr who took that praise to a higher level prior to Sunday's game.

"The guy doesn't look like a rookie," Kerr said Saturday. "I didn't know much about him, I never saw him play until we played Dallas the first time or watching him on TV before that, but he is confident beyond where you would expect somebody in his shoes to be, coming from a different country and being 19 years old. He's a brilliant player. I think he's already an All-Star. I don't know how the vote's going to shake out, but he looks like an All-Star player to me."

"I haven't really done the math," Kerr said. "I haven't gone line by line. So I probably threw that out there without truly doing my homework. I do have a vote for reserves. I think what I meant to say is he sure looks like an All-Star. So whether he makes it or not, he's an All-Star. Certain guys just stand out. You see what they do, you see what they mean to the game. And if he doesn't make it this year, he's going to make it soon enough."

After watching the 19-year-old rookie go off for 26 points, six rebounds and five assists later in the night, the strong opinions about Doncic's game only strengthened.

Like many around the league, Warriors All-Star forward Kevin Durant believes that Doncic's time as a professional in Europe has made his adjustment to the NBA that much smoother.

"He's playing great ball," Durant said. "Definitely for a 19-year-old to average 20 [points], six [rebounds] and five [assists] is definitely numbers you can look at and consider him for an All-Star selection, but there's so many great players out there at his position, so you never know, but just his poise for the game, his step-back 3 -- that's what he wants to get to most of the time. He's big and strong, can pass, can play in the pick-and-roll. He played in Europe last season. The rest of the rookie class played in college. So he's in the second-best league in the world learning how to play the game."

With Kerr having spent much of his professional life in and around the NBA, what stands out most to him is the ease with which Doncic is accomplishing all of this at age 19.

"You just don't see it very often," Kerr said. "Very rarely. I'll bet we could go over the last decade and only find a handful of teenagers who have made this kind of impact in the league."

Curry, the man whom so many young players pattern their games after, gave Doncic a front-row seat to another dazzling performance on Sunday night, going 17-for-32 from the field and 11-for-19 from beyond the arc. It was Curry who hit the clutch shots Sunday that Doncic has hit throughout the season in his brief time with the Mavericks.

"It's nuts," Doncic said of Curry. "He's a helluva player. He does things you can't guard. It's just nuts what he does."

As productive as Doncic was Sunday, he faltered down the stretch as the Mavs failed to close out the Warriors. Dallas was 0-for-8 in the clutch -- the final five minutes with the score within five points -- and Doncic accounted for half of those misses after going 8-for-13 from the floor in the first three quarters.

The dud of a finish was a rarity for the rookie who has established himself as one of the NBA's premier clutch performers, most recently scoring seven points in the final 88 seconds to lead the Mavs to a comeback win over the Minnesota Timberwolves on Friday.

According to NBA.com/stats, Doncic ranks ninth in the league with 72 clutch points in 71 minutes and third in clutch field goal percentage (52.2) in those situations (52.2) among 47 players with at least 30 attempts. He is embracing being the late-game go-to guy, as he did the past few seasons with Real Madrid.

After the game ended, Curry spent a few moments with Doncic and offered him a few words of encouragement.

"I said, 'I don't have to tell you anything,'" Curry said of his message. "'Just keep doing what you're doing.'"

Kerr: Luka 'sure looks like an All-Star'
Steve Kerr sees Luka Doncic as an All-Star talent and if he doesn't make it this year he will soon enough.