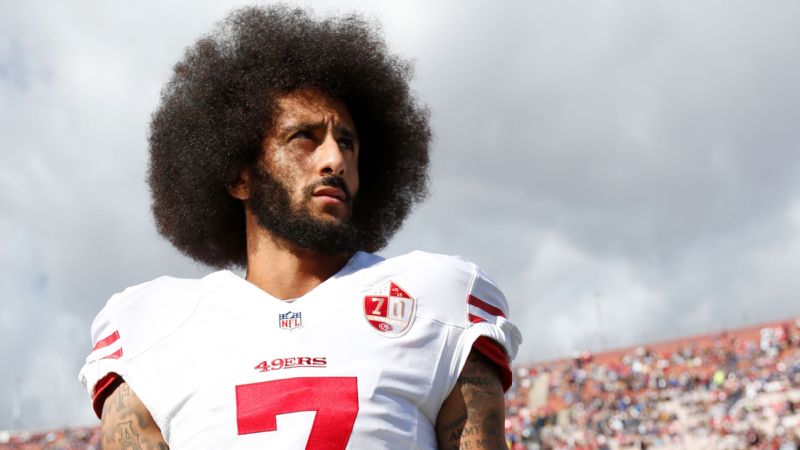 On Independence Day in the United States, free-agent quarterback Colin Kaepernick posted a video on social media of his trip to Ghana, where he traveled to find his "personal independence."

He posted the video on Twitter with a message asking, "How can we truly celebrate independence on a day that intentionally robbed our ancestors of theirs?"

He posted a longer message on Instagram with the video, explaining why he was interested in traveling to Ghana. In order to find his personal independence, he "had to find out where my ancestors came from," and tracing his ancestral roots led him to Ghana.

Kaepernick has used his social media platforms to support social causes but has remained silent on his football career. Many NFL players have said they believe Kaepernick is being "blackballed" by NFL teams because of his decision to kneel during the national anthem last season.

Kaepernick, 29, spent the first six seasons on his NFL career with the San Francisco 49ers, starting 58 regular-season games and helping the team reach Super Bowl XLVII. He opted out of the final year of his contract in March.

Niners general manager John Lynch said last week in a radio interview that he spoke with Kaepernick and that the quarterback wants to play in the NFL this season. He said he urged Kaepernick to express publicly in an interview that he is still committed to his football career.

"He is fully committed to wanting to be in this league. ... I won't communicate too much of what we've talked about, but I will communicate that I gave that opinion to Colin myself: 'I think you are having a little bit of an image crisis in terms of not so much what you did last year, but people are wondering, is this most important to you, at a position where the guys that succeed at that position are the guys that live it, breathe it, the CEOs that play that position.' And I think there is a perception that football's not on the top of his list," Lynch told KNBR Radio in San Francisco.

"And so, my communication with Colin was, 'Your best effort, I think the way you could best help yourself is to not have someone talk for you, not have statements, but go sit down and do an interview, and let people know exactly where you stand.' Because he makes a compelling case as to how bad he wants to be in the league when you talk to him.

"And so, I'll leave it at that, but we did have those discussions and I think that would help him."

While in Africa, Kaepernick also has traveled to Egypt. Current 49ers receiver Marquise Goodwin accompanied Kaepernick there, posting an Instagram picture of himself with the quarterback.