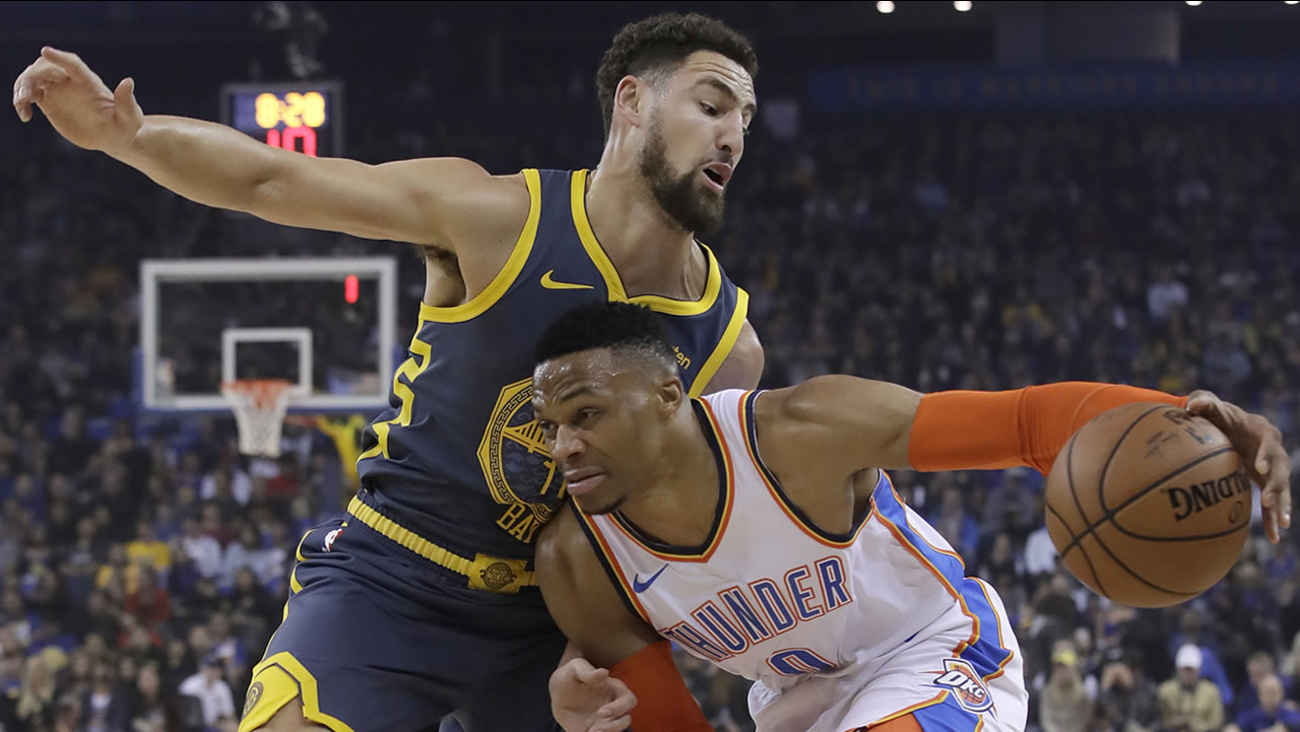 Thunder guard Russell Westbrook, right, dribbles next to Warriors guard Klay Thompson during the first half of an NBA basketball game in Oakland, Calif. on Nov. 21, 2018. (AP Photo/Jeff Chiu)

Many Oklahoma City fans hoped for the chance to boo former Thunder star Kevin Durant, but the league's No. 4 scorer sat out his second straight game for the Warriors with a sprained right ankle.

Golden State made up for Durant's absence with defense. Oklahoma City shot 32 percent from the field, its worst percentage of the season, and made just 13 of 41 3-pointers.

Paul George had 29 points and 13 rebounds, and Dennis Schroder added 15 points for the Thunder. Russell Westbrook scored just seven points on 2-for-16 shooting and missed all seven of his 3-point attempts. He had nine assists and eight rebounds.

Curry scored 19 points in the first half to help the Warriors lead 64-46 at the break. Curry scored 11 more in the third quarter to put the Warriors up 87-71 at the end of the period, and they were never threatened after that.

Warriors: Andre Iguodala started in Durant's place and scored two points in 23 minutes. ... Shot 61 percent from the field in the first quarter and made 7 of 11 3-pointers. ... F Draymond Green had nine points, eight rebounds and six assists.

Thunder: Oklahoma City debuted a patch with the logo of Love's Travel Stops & Country Stores on Saturday. Earlier in the week, the Thunder became the final NBA team with a corporate sponsorship. The NBA began selling jersey sponsorships in 2017-18 when Nike became the league's official apparel company. ... Westbrook was called for a technical foul in the second quarter after he thought he got fouled on a post-up against Thompson. It was his 16th technical of the season, which means he'll be suspended for one game unless one of his technicals is rescinded.