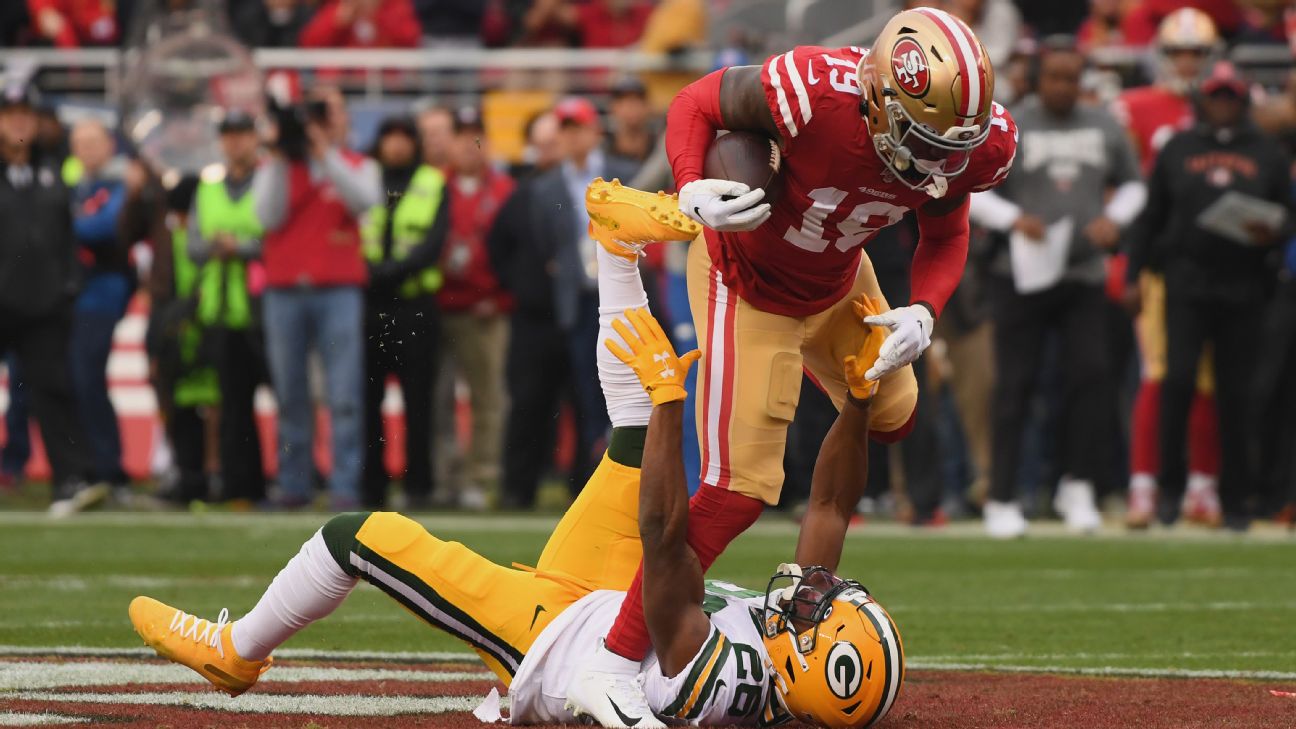 MIAMI -- Born to parents Galen and Precious on Jan. 15, 1996, in Inman, South Carolina, a young Tyshun Raequan Samuel always had a knack for going and taking exactly what he wanted, with or without permission.

It's why, when the San Francisco 49ers receiver was a toddler, Samuel earned his first nickname from his father, Galen, a nickname derived from a prominent character in a movie that came out before Samuel was born: Deebo.

The cult-classic movie "Friday" was released on April 26, 1995, with Tom "Tiny" Lister Jr. playing the role of Deebo, a neighborhood bully who towers over everyone and takes anything he wants. Within a few years, toddler Tyshun had formed a similar habit.

"My father gave me that name because he said I used to take stuff and liked to bully kids when I was a little kid, and that's what the character in 'Friday' did," Samuel said during the spring. "So, actually when I got to college, I thought the name Deebo was going to go away and people would start calling me Tyshun, but as time flew by and kept going it was just like Deebo Samuel."

Samuel, of course, grew out of bullying, at least in his everyday life. But there was one place where he was encouraged to keep it up: the football field.

That mentality has undoubtedly served Samuel -- who estimates he's seen "Friday" about "a thousand times" -- well as he's put together one of the most prolific rookie seasons by a receiver in 49ers history. He finished the regular season with 57 catches for 802 yards and three touchdowns to go with 14 carries for 159 yards and three more touchdowns.

Samuel's receiving total was second to only Jerry Rice in 49ers history among rookies, and his 961 yards from scrimmage ranked second among all rookie receivers.

Along the way, Samuel proved to be the ideal weapon for a Kyle Shanahan offense, often using his 6-foot, 220-pound frame to run over and through defensive backs and his 4.4-second 40-yard dash speed and agility (his mom has a different nickname for him, "Sweet Feet") to run past them. He also has proved a willing and physical blocker and is fearless going over the middle, providing a versatile skill set that has allowed Shanahan to really open things up.

"Deebo's allowed us to do more each week," Shanahan said. "For him to play all year like that and to get better each week, even battling through some injuries, it's been great. Says a lot about him as a man. That's where he's improved the most."

And, to be sure, Samuel's breakout rookie season hasn't gone unnoticed, least of all by the man who might -- literally -- be his biggest fan. Lister, who is billed at 6-foot-5, 300 pounds, first met Samuel midway through the season and has been keeping tabs on him ever since.

Before the NFC Championship Game, Lister sat down with ESPN and gave his thoughts on how his namesake is representing the Deebo name, among other things.

Q: When did you first learn about Deebo Samuel?

Lister: Shoot, it's all over the world, man. Everybody's running. You gotta understand something. I'm the No. 1 character actor in Hollywood. I'm in more than 230 movies. So everybody's running to me, telling me about this guy named Deebo Samuel. And then one day I get a phone call and it's Deebo Samuel. And then I come up here and they was like 7-0. Hung with him, met his immediate family. Mother, father. They take care of me. His friends. Meet his lady. So it was just, it was an unbelievable experience. It's the ultimate compliment when you do a movie, and the character touches the hood so much that people, that they name a superstar [after you]. This guy is not normal.

This guy is playing his rookie year like an All-Pro superstar. ... I did everything from working with Tupac Shakur, Michael Jackson, Aaliyah, Hulk Hogan and wrestling, working with Marlon Brando and now there's a young superstar about to win the Super Bowl named Deebo for real. It don't get no bigger than that in your career. There ain't nobody else in Hollywood who got that recognition that my character does in the community, it's so awesome. WHEW ... I don't smoke but give me a cigarette. I feel it. It's better than sex.

Lister: If you get the ball to Deebo Samuel, people got to understand something about who Deebo Samuel is. I was a national champion shot-putter, I'm friends with Deion [Sanders], my manager is [former Rams receiver and Olympic gold medal sprinter] Ron Brown, so I know about athletes. But there's no other human being 6 feet that's 220 pounds and runs a 4.4 40. That's crazy. So, it's hard to bring him down because he runs a 4.4 and he's 220. So when he hits you, he hits you like a linebacker and he runs by you with that cornerback speed. Man. So, I pray to God they come up with more special tricks and stuff to get that ball in his hands. He's relentless. He's not trying to go down. Every time he gets it, he's looking for 6. That's called imposing your will on somebody. Imposing your will. Deebo Samuel, everybody knows it, he's about to go score six points or die trying. But man, the word relentless is Deebo Samuel. He's relentless. He don't never stop coming.

Q: In your prime, could you tackle Deebo?

Q: Were you a fan of the 49ers before Deebo Samuel?

Lister: So I've only got one eye that works but I'm keeping an eye on the 49ers and what they're doing. I like pulling against Ice Cube because Ice Cube is one of the smartest people I've ever worked with. [Ice Cube played the protagonist Craig in "Friday."] He's a Raider and a Laker guy, right? So, I'm a 49er and a Clipper guy. I'm a Deebo Samuel and a Kawhi Leonard fan.

Q: What are the chances we see two Deebos in a new Friday movie?

Lister: Man, I'm trying to get him into the new Friday movie. If we do it, I'm trying to get Deebo in it. That would just be it. Big Deebo and little Deebo. Both doing Friday. Riding bicycles. Now you would have brought two entities to the world. There's only one Hollywood on Earth. There's only one NFL. So just imagine bringing them two entities together on that level.

Q: As the original Deebo, how proud does Deebo Samuel make you?

Lister: This young kid, I can never be more proud to be associated with Deebo Samuel and his family and the San Francisco 49ers. He's wearing it out. I thought I could do it. This puts it over in a huge way. You're watching the greatest team in football with the best young athlete in the world, that's named after your character in the movie 'Friday.' This guy is a class act. He represents the 49ers in a big way. 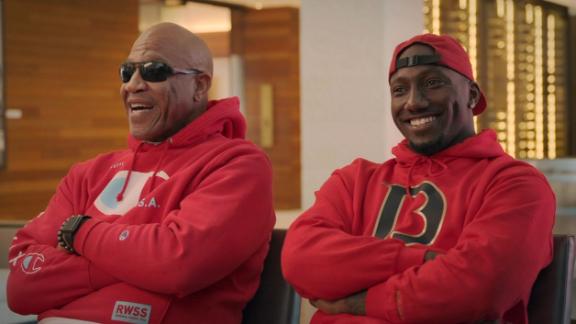 Deebo Samuel's nickname inspired by movie 'Friday'
Deebo Samuel, his family and "Friday" actors Ice Cube and Tiny "Deebo" Lister sit down with Michelle Beisner-Buck to discuss the 49ers rookie's nickname, "Deebo," which was inspired by the movie. 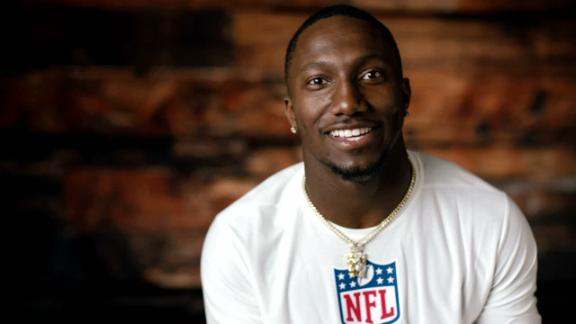