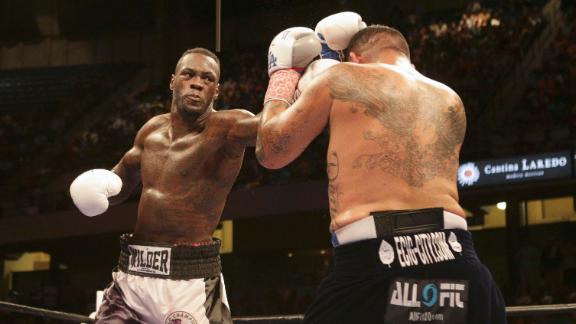 ESPN
By Dan Rafael
BIRMINGHAM, Ala. -- Deontay Wilder dished a beating to Chris Arreola, mostly one-handed, and turned Arreola's face into a swollen, bloody mess in an eighth-round knockout victory to retain his heavyweight world title before 11,974 on Saturday night at Legacy Arena.

Heading a Premier Boxing Champions card in front of his home state fans, Wilder retained his belt for the fourth time as he cruised against Arreola, who fell to 0-3 in heavyweight title fights, getting knocked out in all three.

But Wilder was not the same after savaging Arreola in the fourth round, in which he knocked Arreola down and nearly stopped him.

Wilder said he broke his right hand and tore his right biceps, rendering his right arm useless after the fourth round.

"It's broke," Wilder said as he pointed to his right hand walking past ringside after the fight. "I also tore my biceps."