Derrick Rose: 'It's the whole team' 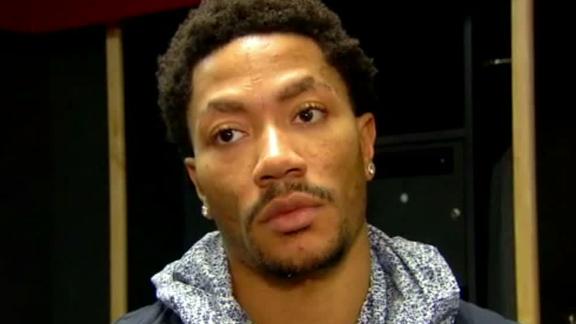 After watching his team give another lackluster effort and lose for the sixth time in the past eight games witha 108-94 loss to the Cleveland Cavalierson Monday night, the former MVP delivered some emotional words.

"Everybody has to be on the same page," Rose said. "Until then, we're going to continue to get our ass kicked."

Asked who was not on the same page, Rose was quick with a response.

The Bulls canceled practice on Tuesday.

Rose's comments come amid one of the worst stretches of the Tom Thibodeau era.

The part that irritates players and coaches isn't so much the losing, especially given that the Bulls are playing without starters Joakim Noah(knee/ankle) and Mike Dunleavy(ankle). It's that they're not playing with the type of intensity that has come to define them over Thibodeau's five years as coach in Chicago.

"I think communication is huge," Rose said. "We're quiet when we're out there, and it's leading to them getting easy baskets. We got to give a better effort. It seems like we're not even competing, and it's f---ing irritating."

"We got to decide when enough's enough," Thibodeau said. "The way we're playing is not acceptable, so we have to change it."

Rose didn't buy the notion that because the Bulls have new pieces, notably Pau Gasol, Nikola Mirotic and Aaron Brooks, and continue to play through injuries, those issues explain why his team continues to falter after a stretch last month in which it won 13 of 15 games.

"We're midway through the season," Rose said. "That should be a part of [the discussion]. There's no excuses. My biggest thing is competing. Playing this game for so long, when you don't have that edge, we're going to keep getting our ass whupped."

As far as the communication goes, Gasol acknowledged the Bulls might need to talk to one another more off the floor to figure out what's happening on it.

"We try to do that amongst ourselves," Gasol said. "We have done it, but we got to do it more. It's part of the process of what's going on, understanding the type of team we have and improving."

The recent slide comes as the Bulls enter a challenging spot in the schedule. They have games against San Antonio and Dallas this week before a home game against Miami on Sunday that leads into a West Coast swing, which starts against the Golden State Warriors a week from Tuesday.

"We're not playing well in any aspect of the game, so we're not giving ourselves a chance to win," Thibodeau said. "Usually if you're playing great defense and you're rebounding the ball and keeping your turnovers down, you're going to be in position to win no matter who you're playing against, no matter where you're playing. No matter who's playing.

Derrick Rose Frustrated
Derrick Rose discusses what is wrong with the Bulls after their 108-94 loss to the Cavs.