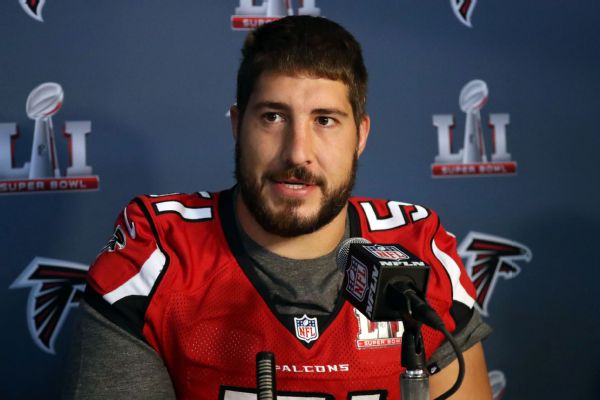 HOUSTON -- Atlantacenter Alex Mack, playing Super Bowl LI with what sources told ESPN was a fractured fibula in his lower left leg, performed well enough for the Falcons to pound out 86 yards rushing in the first half.

With that run game and 14 points off turnovers, the Falcons had a 21-3 lead at halftime.

The Falcons didn't run directly behind Mack that often, but the 31-year-old was able to hold up at the point of attack as the Falcons opened the game with plenty of two-back and two-tight-end sets as they found a way to stress the perimeter of the Patriots' defense.

New England led the league in scoring defense during the regular season.

Atlanta running back Devonta Freeman went for 32 yards on a cutback run on the Falcons' first play from scrimmage, and by the time Freeman went around the left end for a 5-yard touchdown run, he had 71 yards rushing in the game.

Mack didn't look completely comfortable in warm-ups and dialed things back slightly in pregame warm-ups as backup center Ben Garland did more of the individual drills.

But Mack played all of the Falcons' 19 offensive snaps in the first half. Atlanta had 189 yards of offense before halftime.

A source told ESPN's Adam Schefter that if Sunday's game were the regular season, Mack could miss six to eight weeks. Mack is believed to have received a pain-killing injection before Sunday's game.

Between Atlanta's offensive series in the first half Sunday, Mack did not receive any special attention from the Falcons' medical staff. He sat with the other offensive linemen on the bench, as he normally would.

Mack, who suffered the injury in the win over Green Bay in the NFC Championship Game, didn't practice the week after that win and was limited in the team's practice this past week in Houston.

"Getting him a chance to see him practice at full-speed on Wednesday, Thursday was really important for me," Falcons coach Dan Quinn told ESPN's Ed Werder on Saturday. "I wanted to make sure he could go do his thing and just really fly and haul. He's such a unique player because of the quickness he plays with, so I was pleased to see that. We held him the week prior to heal and get right. I was pleased he got the work in. It was totally by design. We were going to give him half his normal reps on Wednesday and Thursday and let him do the normal Friday, and that's how we laid out the week for him. It went exactly like we thought."

This fracture occurred just above the plate that Mack had inserted in his left leg after he broke his fibula in 2014.

This past week, the Falcons switched Mack's injury on the mandated injury report from "ankle" to "fibula," and at that point, some in the league said they believed that meant there was some kind of fracture and that the injury would likely be at the bottom of the fibula and the top of the ankle.