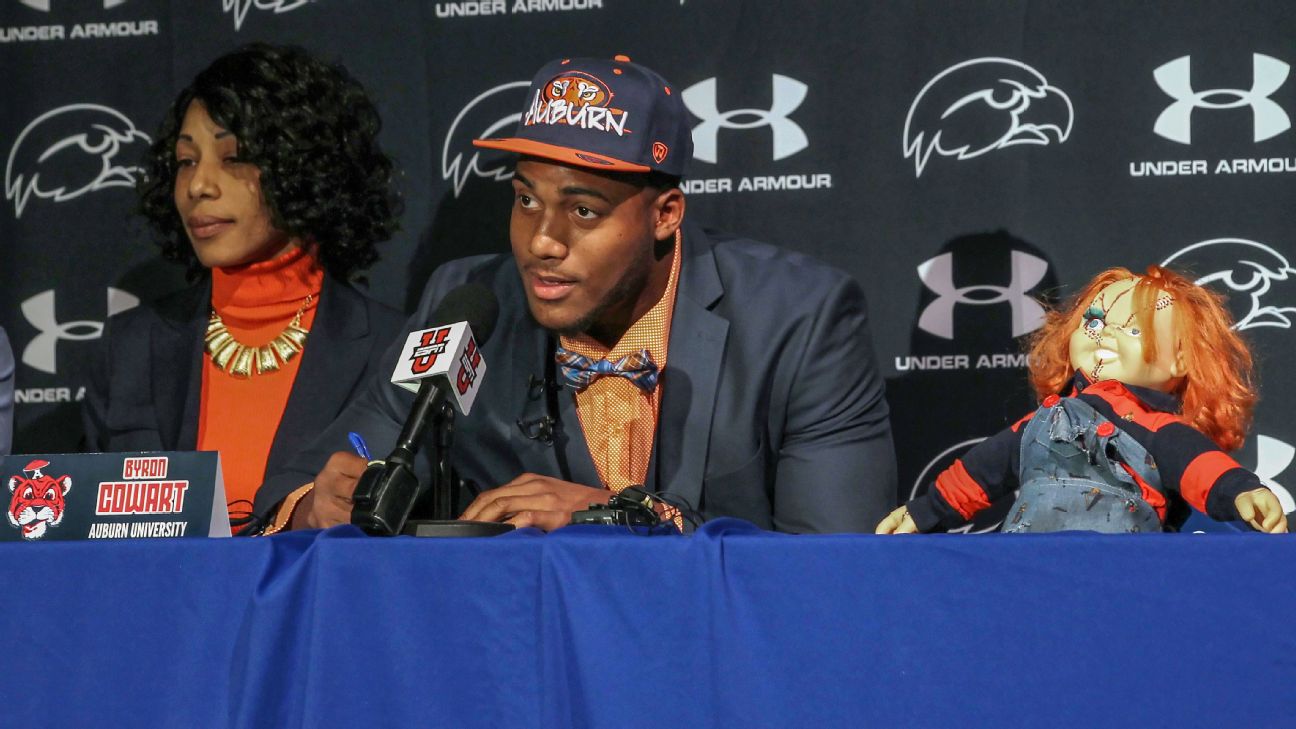 College football's early signing period starts on Wednesday, which means high school prospects across the country will be making their announcements and choosing their future college destination.

Some will choose to put a number of hats in front of them, picking up the hat representing the school they'll be attending and be satisfied with that representation of the school. Others, however, could get a little more creative in how they announce their decision.

If the prospect has a flare for the unexpected, or a desire for the spotlight, a dramatic edge to them, they could opt to take notes from some of the past prospects who have chosen the creative path to their commitment.

To give those recruits some help, let's take a look at some of the best recruiting props used to make an announcement in the past.

This list has to start with running back Isaiah Crowell, who used a bulldog puppy to announce his commitment to Georgia, the Bulldogs, back in 2011. Crowell was the No. 4-ranked recruit out of Carver High School in Columbus, Georgia, and made waves when he pulled out the live puppy.

He first put on the Georgia baseball hat, then waved to someone off camera to hand him the puppy, complete with a puppy sized Georgia jersey.

Crowell's decision to use an actual dog is high on this list because it sparked a trend for other Georgia commitments to use dogs in their announcements as well.

Running back Elijah Holyfield, the son of Evander Holyfield, walked out with two bulldogs aptly named Chubbs and Girly. Defensive lineman Michail Carter and quarterback Justin Fields both used a dog in their commitments as well, and can all thank Crowell for starting the trend.

Mecole Hardman committed to Georgia in the 2016 class, but opted to go a different route than the dogs. Hardman first set up his announcement with four cakes on a table with Tennessee, Michigan, Florida and Clemson logos on small pennants in the cakes.

He was trying to throw people off the trail, but he eventually ran through a giant paper banner wearing a Georgia jersey, hat and gloves and announced his commitment to the Dawgs.

Along similar lines of a cake, Dorian Gerald, one of the top junior college recruits in the 2018 class, pulled out a staple in the recruiting process, a cookie cake.

Gerald eventually picked up the Arkansas cookie cake, committed to the Hogs and took a big bit out of the cookie cake.

While using an actual dog, or a dessert, in your announcement is creative, it is on the safer side. When it comes to live animals used as commitment props, it will be tough to beat offensive lineman George Brown, who used a baby dwarf caiman to commit to Florida because owning an alligator was illegal in his home state of Ohio.

Brown was a 6-foot-6, 274-pound offensive lineman from Cincinnati, who eventually flipped to LSU. He did not make that flip by using a live tiger, however, so it was less grandiose than the first commitment.

Puppies and alligators made it easier for recruits committing to schools with animals as their mascots, but what about the prospects choosing a school without an animal to hoist up like Simba in the Lion King?

Solomon Thomas figured out how to get around that when he committed to Stanford. Leave it up to the smart kid to find a solution.

Thomas was the No. 25 ranked prospect in the 2014 class, a defensive end out of Coppell, Texas, who made the call for Stanford. Of course, Stanford's mascot is a tree, so Thomas took that literally and pulled out a small, potted evergreen tree along with Squints Palledorous-style glasses to make the look complete.

Thomas said the tree was not initially in his plans to announce his commitment, but the night before a friend suggested he use it. The rest is his-tree. (Sorry, I had to.)

Other players have gotten creative with the mascot, as well, including 2017 ESPN 300 defensive tackle Marvin Wilson. He was the No. 4-ranked recruit in the class and committed to Florida State by showing off some custom Florida State-themed Jordans.

That was a smart move by Wilson, because a pair of shoes is probably a lot easier to take care of than a tree or a dwarf caiman.

Other prospects have gone with apparel as well, including 2006 offensive lineman Andre Smith, who announced his commitment to Alabama by putting on a houndstooth hat.

Not everyone has used apparel or an actual prop to announce their decision, though. In the 2014 class, Jabrill Peppers was the second-ranked recruit overall and committed to Michigan, announcing his decision on TV with a prewritten rap song.

Peppers had dabbled in music before and after his commitment and used the opportunity to show off his lyrical talents to the viewers.

Not everyone can rap the way Peppers can, though, so some recruits brought in professional rappers to help them with their commitment.

Jack Jones was an ESPN 300 cornerback in the 2016 class, and he enlisted the help of Snoop Dogg to conduct a commitment video. Snoop acted as the host and interviewer, asking Jones a few questions before he committed to USC.

That wasn't the only time Snoop made an appearance in a commitment video, either.

He also showed up at the end of Olaijah Griffin's television announcement, along with former NFL player Willie McGinest.

Griffin is the son of rapper Warren G, who popped a giant balloon, exploding gold confetti onto the studio floor as his son announced his commitment to USC. Since Warren G is Griffin's father, this one made sense that Snoop would also be there.

Family members -- especially famous ones -- are an easy way to incorporate some creativity in an announcement. They can help create an exciting moment even more special, but it hasn't always gone as planned.

Brothers Landon Collins and Gerald Willis both experienced that when Collins committed to Alabama in the 2012 class and Willis committed to Florida two years later. Both commitments were on television, and both times their mother expressed her displeasure in the decisions.

Collins' mother wanted her sons to pick LSU and was vocal about her favoring the Tigers.

The lesson: It can be a cautious tale to add family members to the mix, but the ultimate prop that no puppy, cake or alligator can beat is using an actual baby. If recruits are looking to include some creativity and also don't want the backlash from fans from the schools the prospect doesn't choose, use a baby in your announcement. No one can get upset at a baby. Fans aren't going to tweet terrible things at you if a baby just told them where you'll play college ball.

Jamal Adams was smart when he held his baby niece, who had a white T-shirt on initially. Adams announced he was committing to LSU by pulling the white shirt off of his niece who was then donning a striped T-shirt with the LSU logo on it.

Fans are too busy smiling at the baby to be upset with him that they're not getting one of the best players in the country. Richie Brown pulled a similar move by holding his nephew while wearing a Mississippi State shirt, which eventually turned into a few memes.

So, while we await the announcements and commitments of recruits in the 2020 class, this gives those prospects a few ideas of how to properly pull off a unique announcement. Rather than just putting on a hat, maybe think about dressing up a baby or eating a cake on live television, truly making it an unforgettable moment. 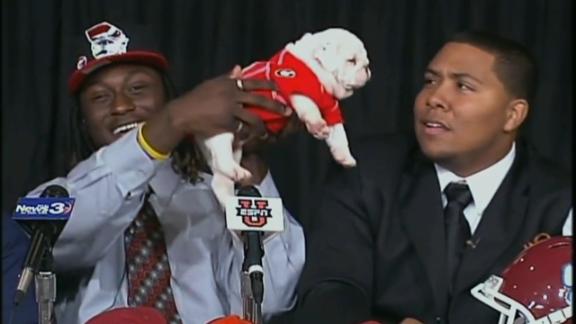 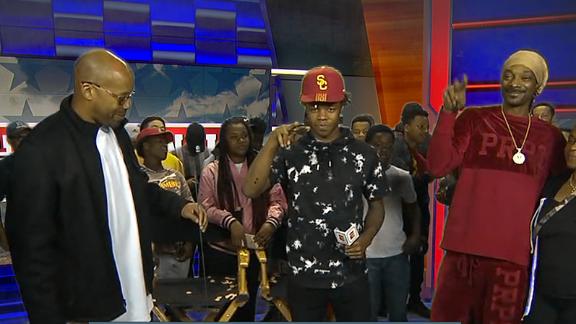