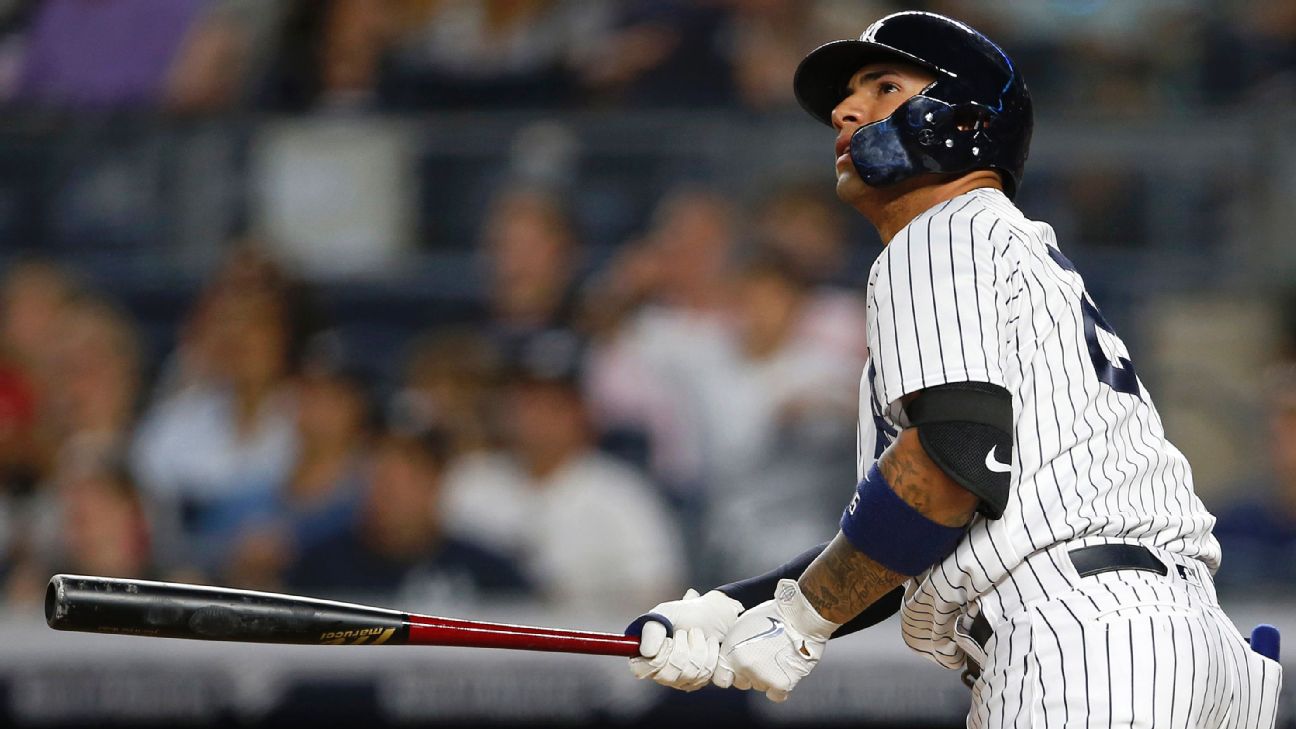 A hot topic across baseball land the past few days: Would you trade Gleyber Torres for Jacob deGrom?

It's fun to speculate about. The Mets are looking like a mess again and in theory should at least consider shopping deGrom to kick-start a rebuild of sorts and create more depth in the organization. The Yankees could certainly use some help in the rotation, and they could trade Torres and plug in Neil Walker or Brandon Drury at second base.

As a practical matter: Are you kidding?

(A) The Mets are not going to trade deGrom.

(B) The Mets are definitely not going to trade him to the Yankees.

(C) There is absolutely zero chance the Yankees will trade Torres, even if their rotation was Tim Leary, Dave LaPoint, Andy Hawkins, Chuck Cary and Jimmy Jones.

Torres belted his 13th home run on Thursday in the Yankees' 4-3 win over the Rays, a three-run blast off tough lefty Blake Snell:

Torres was called up on April 22. He hit his first home run 13 games later, on May 4. Since that date, only J.D. Martinez, with 16, has more home runs. This is a 21-year-old rookie second basemanin the first 45 games of his career going toe-to-toe with one of the game's best sluggers. Let's talk about that instead of worrying so much about pace of play.

This may sound like a silly thing to type, but I'm going to type it anyway: Gleyber Torres has a chance to become the best player in the game, non-Mike Trout division. Astute readers may recall that in the previous edition of Real or Not, I raved about Juan Soto and said he may be better than Torres or Ronald Acuna Jr. What can I say? These are exciting times. Plus, my ESPN colleague Eduardo Perez also just raved about Soto, saying he reminded him of a young Albert Pujols.

As for Torres, here's what we've seen so far:

He plays a premium defensive position.

He has played his position well, with plus-2 defensive runs saved, a figure that should go up as he cuts down on the errors (he has made eight already). Keep in mind that he's a natural shortstop with the obvious arm strength to play there if the Yankees move on from Didi Gregorius in a couple of years.

Look, I'm not saying Torres will become an MVP-caliber player, just that the qualities are there that it could happen if everything breaks right. Yes, this could be overreacting to a small sample size, and critics easily could point to the red-hot debuts last year from Rhys Hoskins and Matt Olson, and then point out their 2018 numbers. That's fair, although Torres is also much younger than those two.

Torres will certainly have to make some adjustments. He's crushing sinkers -- .450/.500/1.150 -- while struggling comparatively with four-seam fastballs at .235/.297/.441. Like many young hitters, he'll chase sliders off the plate, although his overall chase rate on pitches outside the zone is 23.0 percent, which is less than the MLB average. So while he hasn't walked much yet, he's not a wild swinger either.

He plays with confidence, he plays with flair, and he has been a top prospect for several years now, so this performance isn't coming out of the blue. He's a building block, not trade bait. He's not going anywhere.

The Astros may never lose again: Remember when the Astros split that two-game series with the Mariners last week and we then pointed out their next 36 games were against teams .500 or below? Well, they swept the Rangers on the road and now they've swept the A's on the road and have won eight in a row.

Justin Verlander got the win in Thursday's 7-3 victory over the A's, although he did allow three runs for the second straight start. That's how good he has been: Three runs is a bad start.

A key player of late has been 5-foot-6 spark plug Tony Kemp, who has a received a chance to play, with the struggles of Jake Marisnick and Derek Fisher. Kemp has hit .301 with a .381 OBP. Kemp has always hit in the minors and draws a few walks while not striking out much, but has been blocked the past couple of seasons. Nice to see him getting some time in the outfield.

Painful win for Giants: The Giants finally beat the Marlins, an exciting 6-3 victory that took 16 innings, with Ty Blach pitching 6 2/3 innings in relief to get the win. But Evan Longoria broke his finger -- the same injury Madison Bumgarner suffered in spring training -- when hit by a pitch, and the club will determine over the next couple of days whether surgery is required.

Longoria's first season with the Giants has come with mixed results. He has 10 home runs and 16 doubles, so there has been some extra-base power, but he's also hitting .246/.278/.434 as he has drawn just 10 walks versus 57 strikeouts.

When Longoria first came up with the Rays, he was one of the league's premier all-around players because he had power, got on base and played great defense. The on-base skills have deteriorated in recent seasons, however, with a career-low .313 OBP last season that has sunk even further this year. He still averaged 3.5 WAR the past four seasons, but he's at just 0.5 in 2018. In other words, it's possible the Giants won't miss him all that much while he's out, especially if Alen Hanson really has discovered something at the plate.

Longoria has four more seasons after this one on his current deal. The Giants could be paying a significant salary to a player who is basically Pedro Feliz in his later years.

Miguel Sano's career needs a do-over: The Twins sent 2017 All-Star Miguel Sano down to Class A as his slump has taken him to a .203/.270/.405 line. It's hard to argue against the demotion, although I don't quite get the purpose of sending him to Class A instead of Triple-A. I guess the rationale is working on his swing in a lower-pressure environment, although I'm not sure what he'll learn beating up on Class A pitchers. Seems like it's an attempt to send a stern message that sending him down to Triple-A may not have done.

If I were the Twins, the first thing I'd do is hire Sano a personal chef or personal trainer or whatever it takes to get him in better shape. You invest all this money and organizational resources in a player, but what happens off the field is too easily left to chance. Some players need help and direction in this area, and my feeling is Sano is one of those guys.