In first chance to respond to anthem comments, 49ers display show of unity 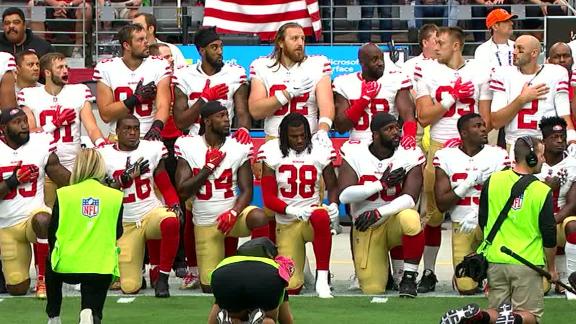 GLENDALE, Ariz. - Given a few extra days to ponder their own show of unity while considering the initial reasons for the protests during the national anthem started by former quarterback Colin Kaepernick, the San Francisco 49ers staged a unique demonstration before Sunday's game against the Arizona Cardinals.

"The point of our demonstration was that regardless of how we feel about these issues, we all have different beliefs," safety Eric Reid said. "Guys want to stand, guys want to protest but regardless of that we put that aside and we're together. We're a team. We don't hate each other because of our different beliefs and I think that's something that the country needs to understand as well. A lot of people in this country, they feel anger because they don't understand something, they don't understand how somebody thinks and feels about something. That's not the way to approach something.

Immediately after the anthem, the 49ers issued a statement said to be from the players, coaches, ownership and staff.

"At its purest level, football is a unifier of people from all walks of life, different socio-economic backgrounds, every corner of this country and around the world," the statement said. "As players, coaches, ownership and staff, we are privileged to work in an environment that is a tremendous example of how people can come together for a common goal. We not only put our differences aside, but we also use them to achieve that common goal by challenging each other to be better -- both in our professional and personal lives.

"For more than a year, members of our team have protested the oppression and social injustices still present in our society. While some may not have taken a knee or raised a fist, we have all shared the desire to influence positive change. Today, our team chose to publicly display our unity in a new way and, in turn, urge others do the same. Our demonstration is simply a representation of how we hope our country can also come together by putting differences aside and solving its problems.

"As the majority of us have done throughout our careers, we use our platform as members of a NFL team, and our right to freedom of expression, to speak up for those whose voice is not heard. It is important that we continue to emphasize that despite our different backgrounds and beliefs, we still love each other and are truly a brotherhood. Our gesture today was an intentional effort to demonstrate that. Make no mistake, we love this great country and have tremendous respect for our military and veterans who have sacrificed so much for our right to express ourselves freely. We passionately want what is best for this country and all its citizens.

"On behalf of the San Francisco 49ers organization, we urge our fellow citizens to embrace your differences, find strength in them, and come together for the good of all."

This was the Niners' first chance to demonstrate since President Donald Trump's comments about players participating in protests during the national anthem. Trump made his initial comments in Alabama the day after the 49ers played the Rams on Sept. 21, and he has continued to express similar sentiments via social media.

All week, multiple Niners players and Shanahan said they weren't sure what form that would take but that it would be something that would involve everyone. Reid, who was the first player to kneel alongside Kaepernick in protest of racial inequality and police brutality last season, spent about 20 minutes discussing those issues and possible demonstrations Wednesday.

After the game, Reid reiterated his hope to keep the focus on the issues that he and other players are protesting rather than their method of protest.

"That's what we're working on," Reid said. "As I've been saying the past couple weeks, we have got to control the narrative. The narrative is that police brutality happens because they operate under a system that allows it to happen."

Entering Sunday's game, Reid had been the only 49ers player to kneel this season. He was among the players kneeling Sunday, a group that included linebacker NaVorro Bowman, running back Carlos Hyde and defensive lineman Arik Armstead.

Bowman pointed to Trump's comments as compelling him to kneel for the first time.

"I have been playing this game my entire life and I've met so many people from different races and ethnicities and became the best of friends to them, became like brothers to them," Bowman said. "And for a guy that's never played this game or understand what goes into it, the brotherhood that we build with blood, sweat and tears, I just felt like he has no say, no type of control in this league because he doesn't have any idea or any clue what we go through. I felt like for him to say we better not be doing anything, this is our brotherhood, our league and we should do what we need to do no matter what we're hearing on the outside."

A week after the entire Tennessee Titans team remained in the locker room during the playing of the national anthem, receiver Rishard Matthews did so again, while the rest of his teammates took the sideline before their game against the Houston Texans.

Matthews said last week that he would kneel during the anthem until Trump apologized for his comments about the NFL and its players protesting racial injustice in the country.

Asked if he suggested that Matthews stay inside the locker room for the playing of the anthem on Sunday, Titans coach Mike Mularkey replied, "No. Not from me. That was just what he wanted to do."