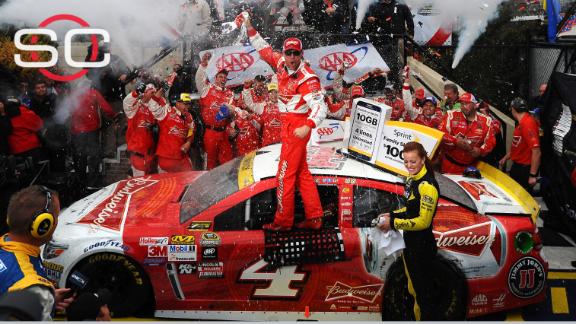 ESPN
By John Oreovicz
DOVER, Del. -- There's no such thing as a lock since NASCAR created its elimination-style format for the Chase for the Sprint Cup.

The six-time Sprint Cup Series champion (and 10-time winner at Dover International Speedway, site of Sunday's AAA 400) is the first big name to drop out of this year's Chase. Johnson's Hendrick Motorsports Chevrolet suffered a rear axle seal failure about a quarter of the way into the 400-lap race.

The No. 48 crew was able to repair the car and get Johnson back on track. But he was 37 laps down, and in a race with very little attrition, it meant he was relegated to 41st place at the finish, putting him well below the cut line that reduced the Chase field from 16 to 12 drivers.

It was a harsh way for Johnson to celebrate his 500th start in Sprint Cup Series competition.

"That's racing," Johnson shrugged in a pit lane interview. "I've had mechanicals take me out of championships and it's just part of racing. It shows how critical everything is on a race team and how important every component is. You can't take anything for granted.

"It definitely hurts," he added. "Not being at the root cause of a mistake, I guess I'll sleep a little better as a result. We take for granted how indestructible these cars are, but a very simple and inexpensive axle seal took the rear end out of our car and cost us."

Johnson had one of the fastest cars in the race, as he demonstrated by driving quickly through the field after garnering a pit lane speeding penalty early on. But being so far behind and with so few other drivers encountering trouble, Johnson's quest for a record-tying seventh Cup Series championship will have to wait another year.

"As I worry about things, I worry about a flat tire, a pit call, or about hard racing and something going on there," Johnson said. "You don't worry about an axle seal failing and the rear end burning up. I mean, it's just not on your radar! That can't be more than a $5 part that took us out.

"Heartbreaking for sure, but there's nothing else we can do about it," he continued. "We just have to go on and try to win races and close out the season strong."

As NASCAR hoped when it created the elimination format for the Chase, there was plenty of drama surrounding which drivers would advance to the Contender Round that starts Saturday night at Charlotte Motor Speedway and which drivers would be left out.

Kevin Harvick, Matt Kenseth and Denny Hamlin earned their way forward with race wins, but the points battle for the remaining nine positions was intense. Only two points separated sixth-place Kurt Busch from Dale Earnhardt Jr., who claimed the 12th and final position on a tiebreaker over Jamie McMurray.

Earnhardt and McMurray actually raced each other on the track at Dover for the final transfer spot, with Earnhardt finishing third and McMurray right behind in fourth.

Earnhardt demonstrated his hunger to advance with an incredible final restart, as he moved from eighth to fourth by overtaking McMurray, Joey Logano and Matt Kenseth in one bold outside move.

"The car did everything we needed and we kinda got lucky to start on the outside on that last restart," remarked Earnhardt. "Just kind of went around them somehow. Just drove it in there and it stuck.

"I hate that some guys don't get to make it and some guys do, but I'm glad we're able to move on to the next round."

McMurray took the defeat in stride. Johnson, Paul Menard and Clint Bowyer were the other drivers eliminated from championship contention on Sunday.

"I never expected the 88 [Earnhardt] to be able to get by me on the outside," explained McMurray. "He just did a really good job and once he got in front of me, it's just hard to pass.

"Our goal at the beginning of the year was just to get into the Chase," he added. "The unfortunate part is we just didn't run good enough in the first two races. We ran great today. I really thought just being consistent would get us in and it was close, but we just needed one more point."