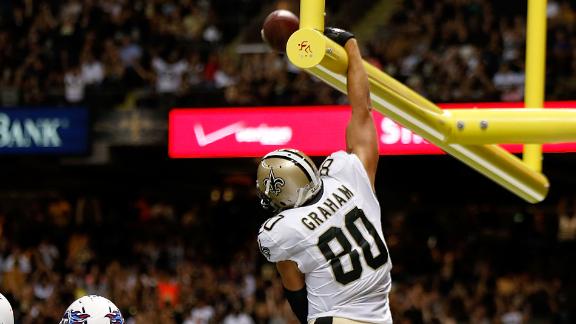 New Orleans Saints tight end Jimmy Graham was fined $30,000 on Friday for twice dunking over the goalpost during a preseason game against the Tennessee Titans last week, it was announced.

Graham said earlier this week that it would be "unfortunate" if he got fined for the dunks. And he obviously disagrees with the penalties themselves because he said they're "not hurting anyone."

"It's unfortunate because I just love the game. I have a lot of passion for the game. And when I go out there on Sunday, it's fun for me," Graham said. "And I feel like a little kid out there, and sometimes I act like it."

Graham's dunks also drew the ire of his coach, Sean Payton, especially on a night when the Saints committed an absurd number of penalties (28 called, 22 accepted).

Graham later insisted he would never do anything to hurt the team during the regular season.

Under the league's fine schedule for unsportsmanlike penalties, players can be fined $11,025 for their first offense and $22,050 for their second if the league feels they're warranted. Similarly, Cleveland Browns quarterback Johnny Manziel was fined $12,000 for making an obscene gesture toward the Washington Redskins' bench on Monday, according to ESPN NFL Insider Adam Schefter.

Meanwhile, Detroit Lions receiver Calvin Johnson also insisted that he won't be dunking as usual this year -- in part to avoid fines like those assessed to Graham this week.

I'm not letting [NFL commissioner Roger] Goodell get in my pockets," Johnson said.