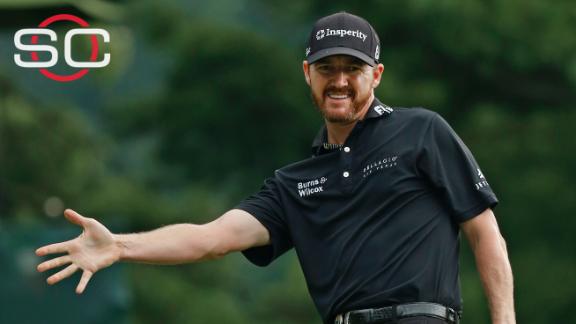 SPRINGFIELD, N.J. -- The stars have never aligned this magnificently for Jimmy Walker.

In the longest final day at the PGA Championship in 64 years, Walker produced three big birdies on the back nine at Baltusrol and held his nerve Sunday against the No. 1 player in the world. Walker closed with a 3-under 67 for a one-shot victory over defending champion Jason Day.

Walker provided a little too much drama at the end.

He built a three-shot lead with an 8-foot birdie putt on the par-5 17th, only to watch Day blast a 2-iron onto the green at the par-5 18th to 15 feet for an eagle, setting off the loudest cheer of the week and closing the margin to one shot.

Needing only a par to win, Walker went for the green and left the ball in deep rough to the right and well below the green. He safely pitched to 35 feet, and the putt settled 3 feet beyond the hole. He never felt more nerves over such a short putt, but there was never a doubt.

Walker calmly pumped his fist twice and embraced his caddie,Andy Sanders, whom he met at Baltusrol in the 2000 U.S. Amateur when they played a practice round.

It was a long road to his first major for the 37-year-old American, and it ended with a marathon.

"Sometimes, things just don't come easy," Walker said after hoisting the 37-pound Wanamaker Trophy; amazing he had any strength left after a 36-hole final day brought on by rain over the weekend. "[Day] really put it on me to make a par. Sometimes pars are hard. But we got it.

"It was amazing. It was a battle all day."

Day, trying to join Tiger Woods as the only back-to-back winners of the PGA Championship in stroke play, came out to the 18th green with his son to watch the finish and quickly found Walker. "Great stuff, mate," Day said.

In a most peculiar final day at a major, the PGA Championship allowed for preferred lies -- that never happens in a major -- because of nearly 4 inches of rain during the week that drenched the Lower Course. Desperate to beat the clock and avoid a second straight Monday finish at Baltusrol, the pairings stayed the same for the final round.

Walker and Day were playing with occasional mud on their golf balls on the back nine of the third round Sunday morning. Some players behind them were able to lift, clean and place their golf balls in short grass in the fourth round.

But it ended on a happy note for Walker. He is a major champion, completing a sweep of first-time winners in the majors this year.

Better yet: It moved him from No. 29 to No. 4 in the Ryder Cup standings, all but assuring him a spot on the team.

Walker is a late bloomer who has received as much attention in recent years for his astrophotography, with some of his work recognized by NASA. He needed a performance that was out of this world in a wet and wild Sunday, and he delivered every step of the way.

Walker played the final 28 holes without a bogey. He began the back nine by holing a 45-foot bunker shot on No. 10 and making a 30-foot birdie putt on No. 11. The final birdie was the most important. Walker twice had to back off his 8-foot birdie putt on the 17th when he heard the crowd erupt after Day's shot on the 18th.

Walker's ball slipped in the edge of the cup for birdie, and he had the needed cushion.

British Open champion Henrik Stenson, trying to join Ben Hogan as the only players to win back-to-back majors at age 40, finally faded away with a double-bogey on the 15th hole.

"It was a long day. I never felt like I brought my 'A' game," said Stenson, who started the final round two shots behind and closed with a 71. "I think I hit more poor shots in the two rounds today than in the previous six or seven rounds combined."

Brooks Koepka, playing for the first time since he pulled out of the Bridgestone Invitational one month ago because of an ankle injury, didn't make a birdie until the 15th hole and closed with a 70 to tie for fourth.

Daniel Summerhays birdied three of his last four holes for a 66 to finish alone in third, earning him his first trip to the Masters next year.

For the second straight major, this became a duel over the final hour.

Day pulled within one shot with a 20-foot birdie putt at No. 11, but he never had another birdie chance closer than 25 feet until the two par 5s at the end. Even so, the Australian battled to the end with the second of two 2-irons at 18 leading him to shout, "Get back there!" And it did.

"It was nice to get the eagle, just to try and make Jimmy think about it," Day said. "But obviously, Jimmy just played too good all day."

Any delay in the PGA Championship would have meant a Monday finish. Instead, it was the first time since Jim Turnesa won the 1952 PGA Championship in a 36-hole match that the winner played so many holes on the final day.