Joe Maddon: Catcher swap not an in-game decision; 'they all knew' 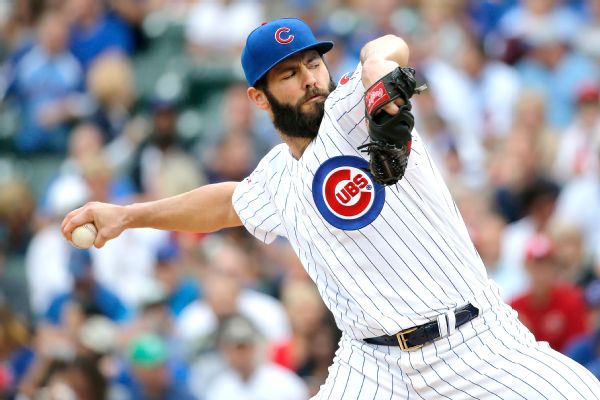 PITTSBURGH -- Pitcher Jake Arrieta and catcher Miguel Monteroaren't the only Chicago Cubs players who want to move past the spring training feel to the final days of the regular season -- they are just the most vocal.

Both bristled Wednesday night at the decision to remove Montero from the game while Arrieta was still pitching. The Cy Young Award winner had just given up three runs to the Pittsburgh Pirates in the fourth inning when manager Joe Maddon pulled Montero in favor of Willson Contreras.

Maddon said it was a predetermined move to give the rookie Contreras an inning with Arrieta in case that combination is together in a postseason contest. Arrieta wound up giving up three more runs in the fifth.

"They all knew what was going to happen before that game," Maddon said Thursday afternoon. "There were no surprises. And there's been no surprises."

But that's not what Arrieta indicated earlier in the day during his own radio show on ESPN 1000 in Chicago.

"Going into the game, I was really unaware we were going to go with a catching change," Arrieta said.

Maddon shot back in his take on Arrieta's night, in which he gave up a season-high 10 hits.

"I don't think it was attributable to a spring training attitude as much as the Pirates had a good approach last night," Maddon said.

Even general manager Jed Hoyer chimed in, also on ESPN 1000.

"It's a difficult balance," Hoyer said. "We mostly get it right, maybe yesterday [Wednesday] we didn't."

In the long run, the disagreement probably will matter little as the regular season has just three days left, which means only three more days of meaningless games.

In other words, teams normally are not treating games like it's a second spring training. To be fair, even the players who want to play more get what Maddon is trying to do. The strategy may prevent shortstop Addison Russell from getting to 100 RBIs, but he wasn't about to get upset.

"It would be nice to have the starters out there doing their thing," Russell said. "People getting rest is OK and giving the bench guys a chance to see how they handle the pressure is good, too."

When informed some players were griping about the atmosphere that Maddon laid out to them after they clinched a playoff spot, the manager had an answer ready to go.

"We're 7-2 in our last nine games, so I don't see any kind of negative pattern right there," Maddon said before Thursday's 1-1, six-inning tie with the Pirates.

Furthermore, Maddon won't change much in the final three games in Cincinnati. He's not pushing anyone more than he has over the past couple of weeks.

That might not be great news to hear for a regular starter, but that doesn't mean it's the wrong move.

"It's been a little weird here knowing these games don't matter for either team, but at the same time they matter for the individuals to get their work in," Zobrist said. "It's a place nobody is usually in.

"It's new for all of us. They have to do the best job they can to keep everyone healthy and at the same time keep everyone sharp. That's a difficult task."

As for spring training, the Cubs already have had one. They don't need another. It's time to get serious again.

"It does feel like spring training," Zobrist said. "We want to get away from that as quick as we can and get back to playing competitive baseball."