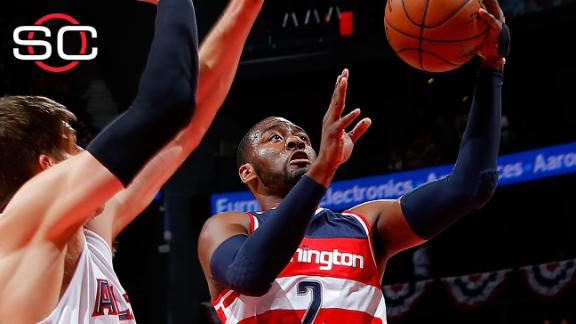 WASHINGTON -- John Wall's injured left hand/wrist came out of Game 5 without any swelling, according to Washington Wizards coach Randy Wittman.

"He'll get checked again later with our doctors," Wittman said on a conference call Thursday afternoon. "Just to make sure everything is where it is supposed to be. After the game, everything looked good in terms of no swelling. That was a good sign.

"Right now I am anticipating that he will be able to play [in Game 6]."

Wall exceeded all expectations in his first game back after suffering five non-displaced fractures in his left wrist/hand in Game 1. Just 10 days after that injury, Wall had 15 points, 7 assists, 4 rebounds, 4 steals and 2 blocks in Game 5.

"It was incredible," Wittman said of Wall's game. "Seriously. If you think back to where he was ... 10 days ago to where you couldn't tell he had five fingers because it was so swollen to finding five fractures to playing the game that he played."

"He's the toughest kid I have been around," Wittman added. "I think that was evidenced last night, to come back from the injury that he has and to really not just try to play but play the way John plays with reckless abandon."

Wall nearly won the game with a scintillating block on Dennis Schroder as theAtlanta Hawkspoint guard drove to the basket on the final play of the game. But Al Horford would not be denied, barreling into the paint and beating Nene, among others, for the offensive rebound and putback that gave the Hawks an 82-81 victory and a 3-2 series lead.

The question for the Wizards is whether they emerged from a gut-wrenching Game 5 loss with a fractured spirit.

Paul Pierce -- who buried two late 3-pointers, including one that put the Wizards up 81-80 with 8.3 seconds remaining -- repeatedly talked about how difficult a loss this was to take.

"It's a tough one to swallow, especially [after] we had a nine-point lead [in the fourth quarter]," Pierce said after the game. "We got to do a better job of closing out the game, running our offense, too many turnovers (13 in the second half). We just got to be able to execute a lot better.

"And it comes down to one rebound," Pierce continued. "But it shouldn't have come down to that. You look at the score, we got them on the ropes ... that's the point where we are supposed to turn up the heat."

Although there was plenty of contact on the rebound in the paint as Nene and Pierce fell to the floor, Wittman did not complain about an offensive foul.

"You had a melee of basically eight guys going to the board," Wittman said. "And Al is the one that came down with it ... there are not going to be calls made down the stretch like that. It's every man for himself. We stayed home pretty much when they decided to go Schroder one-on-one against John. John made a good play to block it, and it was a free ball that came down in their hands."

And just like that, Game 5 and control of this series slipped out of Washington's hands. The Wizards don't have any time to lament what could have been.

Pierce says "the urgency is definitely going to be there" for Washington in a do-or-die game Friday. But he knows the Wizards wasted another prime opportunity to take control of this series.

"The sting of this game," Pierce said in the locker room Wednesday night before a pause and an audible sigh. "[It's] going to motivate us for Game 6. Guys are going to be really fired up knowing we let one get away. We are going to go back home with aspirations of winning and making another trip to Atlanta."