Jordan Spieth: Arriving earlier could have helped for Open prep 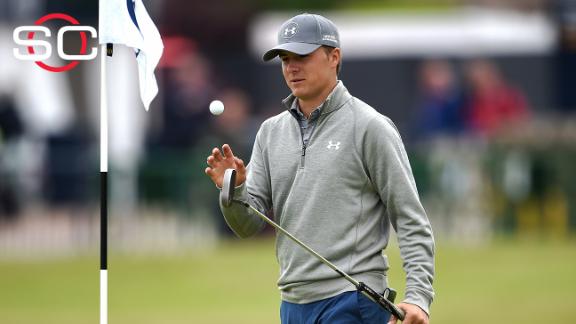 ST. ANDREWS, Scotland -- As he pursues golf history, Jordan Spieth conceded Wednesday that more preparation at the Old Course would have been ideal heading into The Open.

The third major championship of the year begins Thursday, and Spieth has a chance to join Ben Hogan as the only players in the modern era to capture the Masters, U.S. Open and The Open in the same year.

But Spieth, 21, didn't arrive in Scotland until Monday and has been cramming on a course known for its subtle intricacies. He was late because he played last week in the PGA Tour's John Deere Classic, which he won in a playoff.

"I think coming over earlier certainly could have helped," said Spieth, who has four victories this year. "I just liked the fact that I could go somewhere where I could play hard and possibly win a PGA Tour event in preparation.

"But certainly more time on this golf course couldn't ever hurt anybody.''

Spieth endured plenty of second-guessing when he chose to honor his commitment to the John Deere Classic -- where he won his first PGA Tour title two years ago to qualify for his first Open -- but it is hard to argue with much else about the way he has conducted himself in 2015.

After winning the Valspar Championship in a playoff in March, he lost the Shell Houston Open the week before the Masters in a playoff, then won the year's first major wire-to-wire. He overcame a late double-bogey at Chambers Bay, birdied the last hole, then won the U.S. Open when Dustin Johnson three-putted the final green.

After an opening-round 71 at the Deere and despite trailing by 4 strokes on the back nine, Spieth rallied to force a playoff with Tom Gillis,then won it on the second hole.

Now the third leg of a Grand Slam awaits.

"I don't think there's anything more special in golf than playing an Open Championship at the home of golf,'' Spieth said. "I have fond memories from playing here a few years back, vivid memories, one of those courses you play where you don't really forget much.

"There's only a couple of those maybe in the world. I think here and Augusta National are my favorite places in the world, and I've really enjoyed our time getting back here, even in a shortened week.''

Spieth arrived on a charter flight with 18 other players who competed in the Deere and practice with his coach, Cameron McCormick, before playing all 18 holes at the Old Course on Monday.

He played 10 holes Tuesday, then was scheduled for another full practice round on Wednesday.

Spieth said he would draw from winning in Australia late last year and then traveling to Florida and winning the very next week at the Hero World Challenge.

"The toughest part here is just the time change, and it's only six hours," he said. "It's not like you're going to Asia, where you normally need a couple of days to even be able to wake up. The hardest part is jet lag and probably the fact that we've had perfect weather playing this golf course, so it seems a little easier than I think it'll play. I would have liked to have seen tougher conditions in practice rounds to get used to prevailing winds and wind switches.

"But that's part of the fun of the adjustment.''

In the absence of actual practice time on the Old Course, Spieth said he tried to learn as much as he could by playing on a full swing simulator at home.

"It was cool to see some of the start lines, but it's still not the same as being here and preparing,'' he said. "I'm in no way saying that that's what I did to prepare for this Open. It was fun, just because it's so realistic, you can see the start lines where you need to hit it over, but then you get out here and it could change very much depending on the wind.

"The course was a lot easier with 68 degrees and no breeze coming out of the air conditioner in that room, so I got over here and the real preparation really started. I think we've done a lot of good work.''

Spieth familiarizing himself with St. Andrews
Tom Rinaldi details Jordan Spieth's practice sessions at St. Andrews as he looks to gain more experience in a bid for a calendar-year Grand Slam.