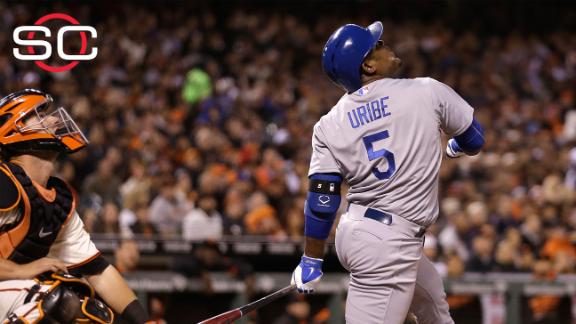 ESPN
By Mark Saxon
LOS ANGELES --Los Angeles Dodgers infielder Juan Uribe said Tuesday night he was told a trade with the Atlanta Braves would be made official either later that night or Wednesday morning.

According to reports, the Dodgers will receive Alberto Callaspo, left-handed pitchers Eric Stults and Ian Thomas and right-handed pitcher Juan Jaime in exchange for Uribe and right-hander Chris Withrow, who is recovering from Tommy John and back surgeries and is not expected to pitch in 2015.

Uribe, when he was asked what he would miss about playing for the Dodgers, got choked up, pointed toward the team's clubhouse -- where his teammates were getting dressed after an 8-0 win over the Braves -- excused himself and walked away.

Uribe, who has the same agent as Callaspo, was not in the Dodgers' dugout after the playing of the national anthem. The Braves wouldn't comment afterward, and no one in the Dodgers organization confirmed the trade. But a few clubhouse attendants were cleaning out Uribe's locker after most of the reporters had left.

Uribe and his teammates had developed a strong bond during their four-plus seasons together, particularly Adrian Gonzalez and Yasiel Puig. One time when Uribe was victimized by a hidden-ball trick, Gonzalez went over to his locker and presented him with a shoe taped to a base, with a baseball inside the shoe.

"I'm not going to be able to charge room service to his room anymore,''Gonzalezjoked. "We had a little back-and-forth going on there. He's been great. Everybody here loves him. He'll definitely be missed, that's for sure.''

A deal that would have sent Uribe to the Braves for Callaspohad been blocked by Callaspo earlier in the day.

"Unfortunately, it was found out about because he was taken out of the lineup. And that's the right way to do it," Braves manager Fredi Gonzalez said about 2 hours before the game. "You don't want a player that you're possibly going to trade get hurt. I talked to Albert this morning just before I came to the ballpark, and he's fine with it. It's all good. He's a good teammate and a popular guy in our clubhouse."

The Braves announced about 15 minutes before the first pitch that Pedro Ciriaco was replacing Callaspo at third base and batting in the seventh spot.

According to MLB.com, Callaspo told the Braves he was willing to accept the trade, which was awaiting the approval of commissioner Rob Manfred.

Under the collective bargaining agreement, Callaspo had the right to refuse a trade until June 15 because he signed with the Braves as a free agent last offseason. Callaspo had previously told reporters he rejected the trade because he liked his teammates and wanted to finish the season in Atlanta.

Uribe, 36, was a key piece of the Dodgers' NL West-winning 2014 team, batting .311 with nine home runs and playing stellar defense at third base.

But the hot hitting of Justin Turner and Alex Guerrero allowed them to push ahead of Uribe on the Dodgers' depth chart at third base. In addition, Cuban defector Hector Olivera is working out at the team's facility in Arizona and could join the mix at the position as soon as a month from now.

"He never fell from grace. Juan has never done anything wrong," Dodgers manager Don Mattingly said. "In professional sports, the guy that performs is the one who plays for the most part."

The Dodgers viewed Callaspo as a better option off the bench because he rarely strikes out and has been adept at times in his career at getting on base.

Uribe is making $6.5 million this season. Callaspo is making $3 million.

The proposed trade started brewing before Monday night's 6-3 Dodgers win over the Braves at Dodger Stadium. Fredi Gonzalez said after the game that Callaspo had been scratched 20 minutes before first pitch because of a potential deal.

"We didn't want him to get hurt," Gonzalez said. "So, that was the reason he got taken out of the lineup."