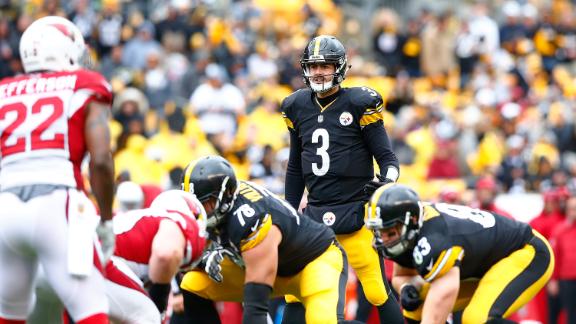 Vick, who was evaluated for a hamstring injury, has not played well since taking over for an injuredBen Roethlisbergerin Week 3, throwing for less than 300 yards in his past 10 quarters of play,including a 3-of-8 performance for 6 yards in two-plus quarters Sunday.

Jones impressed his offensive teammates, including star running back Le'Veon Bell, who noticed Jones calling audibles at the line of scrimmage as if he had been doing it for years.

"It was really like Ben's little brother out there," Bell said. "It kind of brought us back like, 'Dang, Landry has really got this.'"

As for next week's starter at Kansas City, Tomlin made no promises but acknowledged "we've got some options." Tomlin isn't sure of the severity of Vick's hamstring injury.

Jones' early-third-quarter score gave the Steelers a 12-10 lead. Jones threw the ball hard and high for a soaring Bryant, who barely kept his body in bounds.

Jones and Bryant hooked up for a touchdown again in the fourth quarter, an 88-yard scoring strike that gave Pittsburgh a 25-13 lead with two minutes remaining. It was the longest play from scrimmage in the NFL this season.

Jones finished 8-of-12 for 168 yards, while Bryant, who was making his season debut after serving a four-game suspension, had six catches for 137 yards.

Jones briefly stepped in during the first half while Vick went to the sideline with dirt in his eye, but the second-half marks the first extended NFL action from the 2013 fourth-round pick. Jones struggled for parts of training camp, so his continued presence on the field is hardly a sure thing.