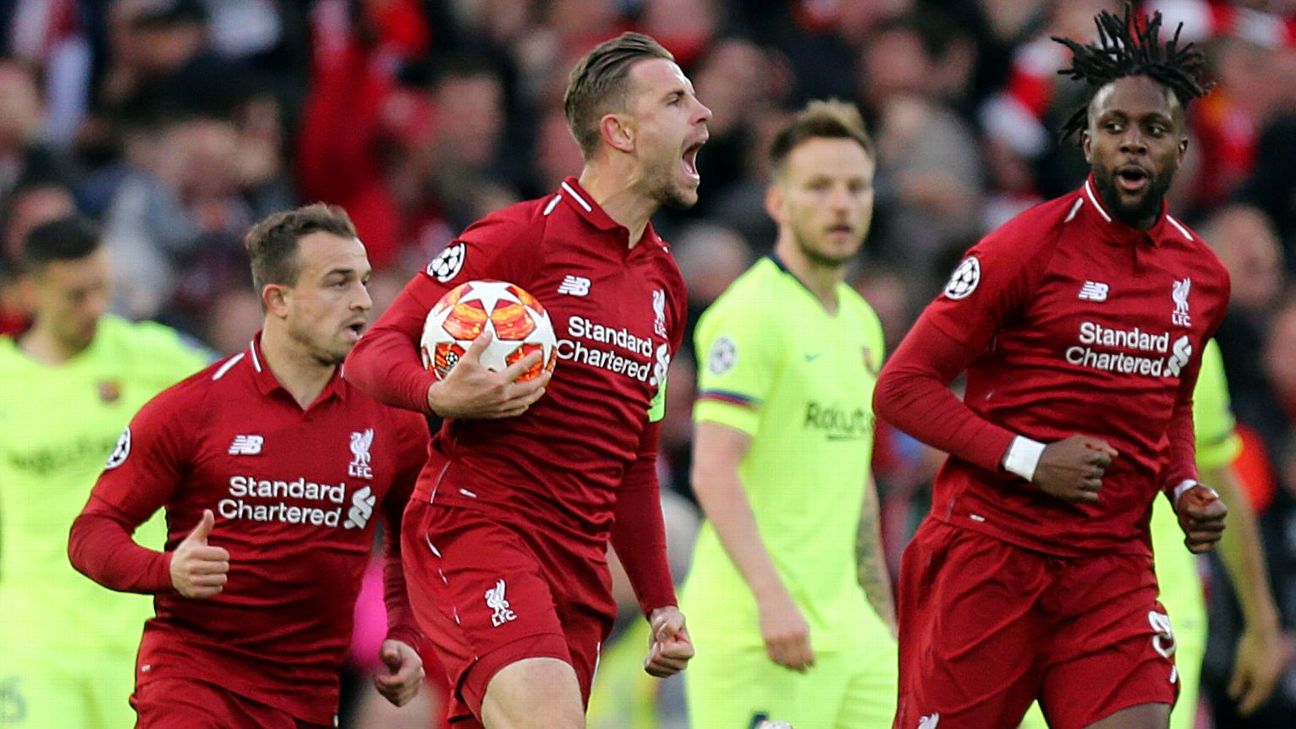 Over the years, our writers have been present for some of the game's greatest occasions. In the latest installment of a multi-part series, they tell the story of the best games they have seen, which include Liverpool's Champions League comeback against Barcelona, Man City winning the Premier League in stoppage time of their last game and San Jose's miraculous playoff comeback against the LA Galaxy.

Some games are so pulsating that you cannot sleep afterward and that was the case following this one. Trailing 3-0 from the first leg and without the injured Roberto Firmino and Mohamed Salah, Liverpool pulled off the greatest fightback in Champions League history on an unforgettable night at Anfield.

But while it turned into a real "I was there" occasion, the history books don't tell the full story. Liverpool were a point behind Manchester City ahead of the final Premier League game of the season and, given the aggregate score ahead of kickoff, some supporters wanted Jurgen Klopp to save his stars for the following weekend against Wolves, in the hope City slipped up at Brighton.

Lionel Messi seemed to know what was coming, though. Having scored twice in the first leg, his head-in-hands reaction to Ousmane Dembele's late miss, when the France forward missed an easy chance to make it 4-0 at the Nou Camp, showed that the Argentine superstar knew the tie was not over.

Divock Origi's goal in the seventh minute gave Liverpool belief and triggered the Anfield atmosphere, but Liverpool only led by one at half-time and Barcelona remained strong favourites to reach the final.

Georginio Wijnaldum made it 2-0 seven minutes after the break, but the decisive moment in the tie -- the one that turned the prospect of a miracle from possible into probable -- came two minutes later when the Dutch midfielder scored again. All of a sudden, the tie was level and Anfield began to shake with noise.

Barca knew that one away goal would swing things back in their favour, but Messi could not summon up a moment of magic and Luis Suarez, playing at Anfield for the first time since leaving Liverpool in 2014, found himself booed and taunted mercilessly by the fans who once adored him.

The winning goal came when Trent Alexander-Arnoldfeinted to take a corner and, with Barcelona's defenders caught off-guard, Origi swept in the fourth at the Kop end to start a party that continued in Madrid when Liverpool beat Tottenham to win the sixth European Cup in club history.

- I was there: Zlatan arrives| Zidane sees red | Donovan's heroics| Ronaldo's overhead| Messi is No. 1

A game that had everything went from being a Premier League-clinching formality -- leaders City just needed to beat a side battling relegation -- to Roberto Mancini's men needing two goals in stoppage time to stave off crosstown rivals Man United, who had won at Sunderland. With QPR leading 2-1 as the fourth official's board was raised, press box laptops were full of ready-to-send reports about how City had blown their chance. The glory that followed even seemed unlikely when Edin Dzeko equalised, given the little time remaining, but thenup popped Sergio Agueroto send home fans delirious.There will never be a title won like it again.

Sid Lowe's pick: Barcelona do the impossible against PSG

It was hard not to be carried along by what was happening. There seemed to be bodies everywhere, a collective madness that overwhelmed everything and everyone at the Camp Nou as Barca somehow came back from a 4-0 first-leg deficit to reach the Champions League quarterfinals. How it all came together is truly worth watching again; the hosts scored three times in the last two minutes, plus stoppage time, with Sergi Roberto's 95th-minute goal capping the comeback.

An FA Cup semifinal replay ticket was my 16th birthday present and the game had everything. In a memorable atmosphere at Villa Park, these bitter rivals, featuring some of the Premier League's best players and led by legendary coaches Arsene Wenger and Sir Alex Ferguson, produced a game that had, among other things, a red card (Roy Keane), a last-minute penalty save (Peter Schmeichel denied Dennis Bergkamp) and a winner,scored by Ryan Giggs in extra-time, that goes down as one of the great goals ever.

It stands out not just for the comeback, but because one team dominated for 110 of 120 minutes, took a 3-0 lead and did not walk away with the Champions League trophy. With Kaka to the fore, Milan scored through Paolo Maldini in the first minutes, before Hernan Crespo netted twice just before the break. What followed -- Liverpool scored three times in six minutes and went on to win a penalty shootout -- made no sense, but on a night that the football gods were Scousers, anything became possible. Very few other sports could conjure something similar.

The greatest comeback in MLS history. San Jose trailed 2-0 after the first leg of the Western Conference semifinals and quickly went down two more goals in the return fixture, only to engineer a mammoth comeback. Jeff Agoos and Landon Donovan pulled two back before halftime, Jamil Walker scored early in the second half and Chris Roner levelled the aggregate score in the 90th minute. With no away-goals rule, the game went into extra time and Rodrigo Faria bagged the Quakes' tie-winning golden goal.

World Cup holders Brazil played a very attacking team for this Germany 2006 qualifier and looked defenceless in the first half as Juan Roman Riquelme passed holes through them. It was 3-0 to the hosts at the break, but Brazil came roaring back as the superb Roberto Carlos scored with a free kick special and Adriano hit the post. Argentina held on for a win their first-half artistry deserved in a game that was a wonderful illustration of all that is good about South American football.

The sheer intensity and quality of the game was staggering as, despite its importance and magnitude to the Premier League title race, both teams went chasing the three points. The goals were well-crafted, but the class of Liverpool's build-up and chain of events that led up to John Stones clearing the ball off the line in the first half, when the game was still goalless, was breathtaking. Still, City came out on top thanks to a Leroy Sane winner and the result became even more important at the end of the season when they won the league by one point from the Anfield club.

I was 12 and only just allowed by my mum to go to Parc des Princes because I had school the next day. PSG lost 3-1 in the first leg of the UEFA Cup quarterfinal at the Bernabeu but were 3-0 up, through George Weah, David Ginola and Valdo Filho, after 91 minutes. I was jumping up and down like a mad man, then began crying when Ivan Zamorano pulled one back for Madrid, before shedding tears of joy when Antoine Kombouare came out of nowhere to make it 4-1. Pure ecstasy!

Improbably, my mind goes back to a goalless draw. Arsenal needed only to defend a 1-0 lead -- courtesy of Thierry Henry's superb goal -- to reach the Champions League quarterfinals, but with Philippe Senderos and Mathieu Flamini in defence, could hardly risk sitting back against Zinedine Zidane, Ronaldo, David Beckham and Iker Casillas produced astonishing saves as the tie stayed on a knife-edge to the end. 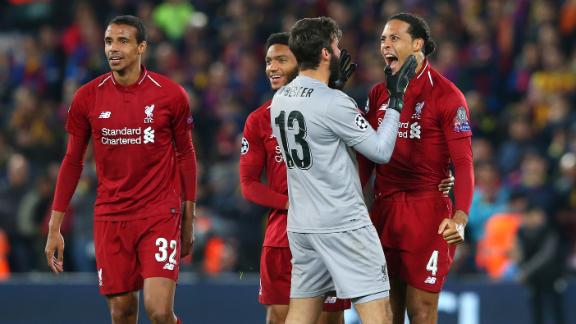 Was Liverpool's 2019 UCL comeback vs. Barcelona the best of the decade?
The FC crew make their picks for greatest football comeback of the 2010s. 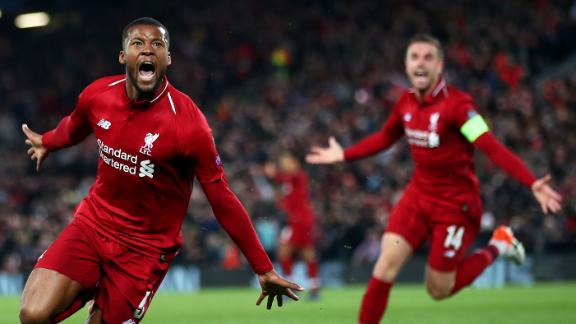