Mets GM: Message will get to Yoenis Cespedes about golf habit while injured 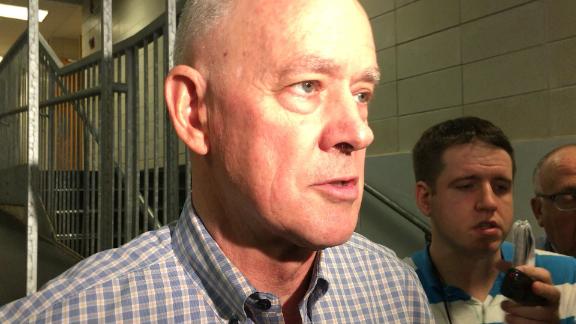 NEW YORK -- New York Mets general manager Sandy Alderson on Thursday called it "bad optics" that Yoenis Cespedes played a round of golf hours before landing on the disabled list with a lingering right quadriceps injury.

Alderson added that he has come to a "mutual agreement" with Cespedes' representatives that the outfielder will refrain from golfing, at least for the time period when it could be viewed negatively by the public.

"I've had conversations with his people, but not directly with Yoenis," Alderson said. "But that message will get to him, at least circuitously, and probably directly.

"... I think everybody is taking it seriously. I think Yoenis takes it seriously. But Yoenis has his own personal life that sometimes is larger than life. We've seen that from the beginning of spring training."

Cespedes injured the quadriceps on July 8, and he has been in and out of the lineup for the past month. He finally landed on the DL after Wednesday's 9-5 loss to the Yankees when manager Terry Collins spotted Cespedes grimacing on a swing during his final at-bat and the outfielder said he could not continue.

Alderson did not have a precise estimate for the expected length of Cespedes' absence, but the GM hoped it would be limited to two weeks. Alderson said an MRI taken of Cespedes' quadriceps Thursday showed no worsening of the injury from when it was originally diagnosed.

In retrospect, Alderson acknowledged the Mets should have placed Cespedes on the DL when the injury originally occurred. Cespedes skipped the All-Star Game and appeared in only 14 games since originally straining the muscle. He hit .227 with one homer and seven RBIs in 44 at-bats during that stretch.

"It has been a trying month or so with Yoenis and the injury," Alderson said. "And, in retrospect, it's probable that we should have just put him on the DL at the beginning of this episode, which is generally true with most injuries, unfortunately. ... On the other hand, he wanted to try to play through it. We certainly had every interest in seeing him do that."

Alderson said team doctors cannot say golf made the injury worse, but the GM acknowledged it comes off looking poor. At least one Mets employee was disappointed that former major leaguer Kevin Millar tweeted a photo of his round of golf on Wednesday with Cespedes, which put it on the media's radar.

In reality, Cespedes may have played golf 10 times in the past couple of weeks, a team official said.

"The golf is bad optics," Alderson said. "Let's just start there. Our doctors have told us that probably had no impact on the injury -- positive or negative. But let's face it: You play golf during the day and then go out injured in the evening; it's a bad visual. I think he recognizes that at this point. So we'll go from there."

Cespedes landing on the DL is a serious blow to the Mets, who enter Thursday's play a season-high 8 1/2 games behind the Washington Nationals in the NL East. Jay Bruce just made his Mets debut on Tuesday after being acquired from the Cincinnati Reds. Cespedes and Bruce only appeared in the starting lineup once together before Cespedes required the DL trip.

The Mets considered calling up T.J. Rivera, but he primarily is an infielder, so team officials passed. Mets brass also was concerned about Travis Taijeron's high strikeout rate with Triple-A Las Vegas (131 Ks in 364 ABs).