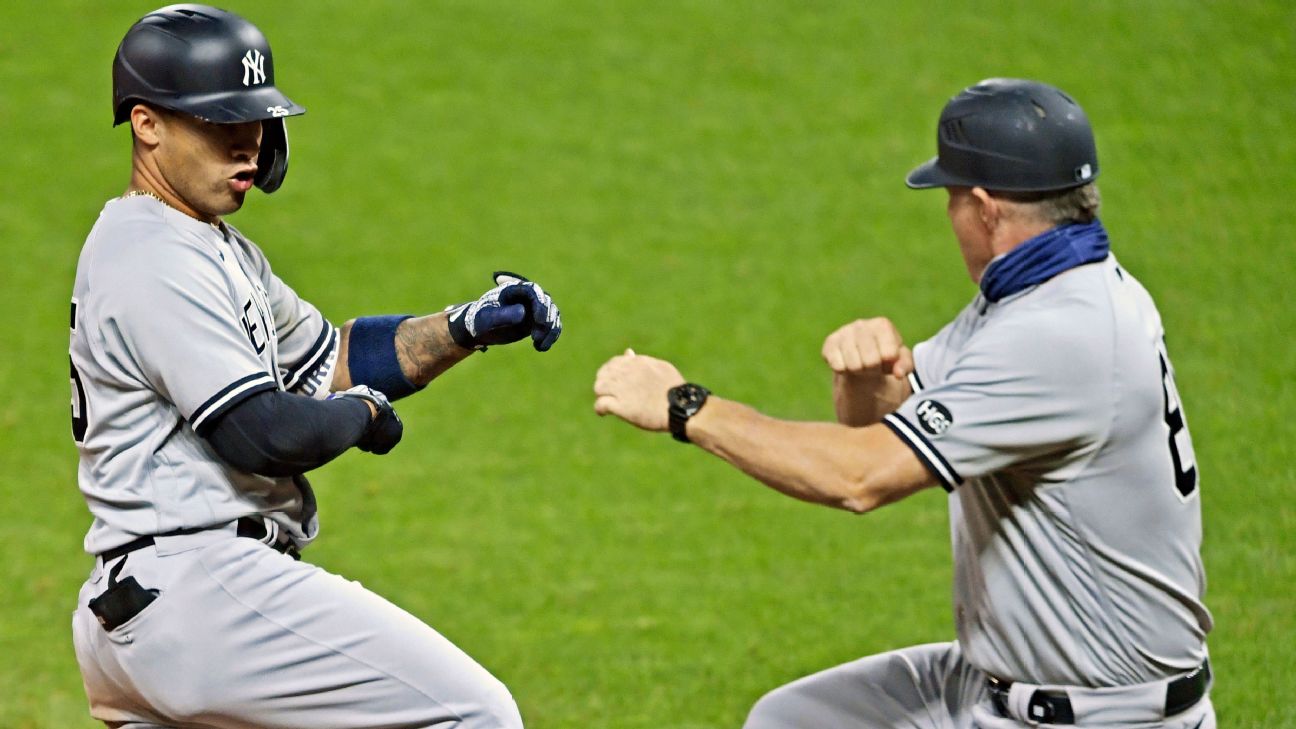 Gerrit Cole and the New York Yankees won the main event in a blowout against Shane Bieber and the Cleveland Indians.The Houston Astros, who finished the 2020 season with a losing record, topped the Minnesota Twins to extend Minnesota's record playoff losing streak to 17 games. The Chicago White Sox beat theOakland A'sas Lucas Giolito flirted with perfection. Blake Snell and the top-seeded Tampa Bay Raysheld off the Toronto Blue Jays.


Here are the heroes, turning points and takeaways from each of the Game 1s.

Game 1 hero: Gerrit Cole. The Bombers' batters deserve a lot of the attention -- for example,Aaron Judge for his tone-setting, two-run home run in the top of the first -- but the Yankees' ace was stellar in winning Wild Card Tuesday's marquee pitching matchup, striking out 13 in seven innings and setting an MLB record with his third postseason game with at least a dozen strikeouts. That is what Cole got the $324 million contract this past winter to do.

What it means for the Yankees: The big question for the Yankees entering the playoffs: After an up-and-down regular season, which team would show up in October? Well, it's not quite October yet, but the Yankees are guaranteed to play at least one game in that month, as the team that won 10 straight in mid-September surfaced to beat the AL's best pitcher in Game 1. If this club shows up again Wednesday -- and gets yet another big-game performance from Masahiro Tanaka -- the postseason could be over early for Cleveland. -- Matt Marrone

What it means for the Indians:Well, Josh Naylor went 4-for-4. And, as Forrest Gump said, that's all I have to say about that.

What? You want more? Fine. This was an utter debacle for the Indians. The best pitcher in the world this year, Shane Bieber, gave up a career-worst seven earned runs. The Indians punched out a baker's dozen times against Cole. Although they have the starting pitching advantage with Carlos Carrasco in Game 2 and Zach Plesac in Game 3, if this version of the Yankees shows up for the rest of the series, Bieber might not get a chance for redemption until 2021.-- Jeff Passan

Game 1 hero: Framber Valdez. Taking out a former Cy Young winner early is exactly the kind of move that can get you second-guessed in the postseason, but young Valdez made Dusty Baker look very smart when he came in and pitched beautifully in relief of Zack Greinke. The relief outing gave Houston's offense a chance to pounce and steal Game 1.

What it means for the Astros: Never did the Astros panic -- not when they were stranding runners, not when their starter Greinke got chased after four innings and not when Jose Altuve, in the midst of a season-long struggle, took a full-count Sergio Romo fastball just above the strike zone for ball four to put his team ahead in the ninth. Between Romo and Valdez going five brilliant innings in relief with just a fastball and curveball -- and escaping a ninth-inning jam -- the Astros did what they needed to scrape by. Now they're in quite the enviable position: two cracks at a chance to face the winner of Chicago-Oakland in the division series. -- Passan

What it means for the Twins: I'd argue that no team needed to win its first game more than the Twins because now they're staring at that incredible, inconceivable mark of 17 consecutive losses in the postseason. Different teams, different years, sure, but that doesn't mean this streak doesn't feel like the weight of the Mall of America on their shoulders. Those 17 defeats have come in many ways, but this was one of the most painful. Shortstop Jorge Polanco made a lazy error with two outs in the ninth inning, casually flipping the ball wide of second base on what should have been an inning-ending force that would have kept the game tied at 1. Now the Twins have to summon the mental fortitude to ignore those 16 years of history and hit the ball over the fence -- or just get a hit with a runner in scoring position after going 0-for-7 in Game 1. -- David Schoenfield

Game 1 hero: Lucas Giolito. The White Sox ace became the fifth player in MLB history to take a perfect game into the seventh inning of a postseason game and allowed just two hits, one walk and one run over seven-plus frames.

What it means for the White Sox: What does a bad finish tell us? Apparently, not much. The White Sox looked like a dispirited club as they dropped seven of eight to finish the season. In the first game of their first postseason in 12 years, that changed. It didn't hurt that Chicago's No. 1 starter -- Giolito -- pitched like a championship-level ace, taking a perfect game into the seventh. Just as important, though, was that the lineup of bashers who swaggered their way through most of the short season was back. Adam Engel, Jose Abreu and Yasmani Grandal went deep as the White Sox were characteristically aggressive at the plate and did damage when they made contact. That was the team we saw for most of the campaign. -- Bradford Doolittle

What it means for the A's: The less said about this performance by the A's the better. Their lineup was the biggest question heading into the 2020 postseason, and Giolito validated those concerns. He was brilliant, the White Sox's relievers did enough to hold the lead, and now the A's -- who have bowed out of the playoffs five times in the past eight years without reaching the ALCS -- need to beat Dallas Keuchel and his 1.99 ERA to remain alive. -- Passan

Game 1 hero: Blake Snell. The former Cy Young Award winner brought electric stuff to the mound, striking out nine batters in 5 2/3 innings and looking like the pitcher who posted a 1.89 ERA in 2018.

What it means for the Blue Jays: Toronto wanted to cobble together a bullpen game out of Matt Shoemaker and Robbie Ray and steal the opener from the best team in the American League. The thing is, that's the Rays' modus operandi -- and, frankly, they're better-equipped to do it. Nobody on the Blue Jays could solve Snell. They touched up Nick Anderson for a run, which is something of a moral victory, but morals don't win three-game series. Good play does, and the Blue Jays now are relying on Hyun-Jin Ryu going pitch-for-pitch with Tyler Glasnow in hopes that they can get to a Game 3, in whichTaijuan Walker would face Charlie Morton. -- Passan

What it means for the Rays: This was a characteristic Tampa Bay victory: a close game won on the strength of pitching depth. This team will need strong performances from its trio of top-tier starters -- Snell, Glasnow and Morton-- to make a deep run this postseason. Snell brought his A-game to shut down Buffalo, er, Toronto in Game 1 and handed things off to Diego Castillo, Anderson and Peter Fairbanks to finish things off. If the Rays make it beyond this round, expect many of their games to look like this one: strong pitching with just enough offensive output to pull off victories. It has been a tried-and-true formula this season. -- Joon Lee 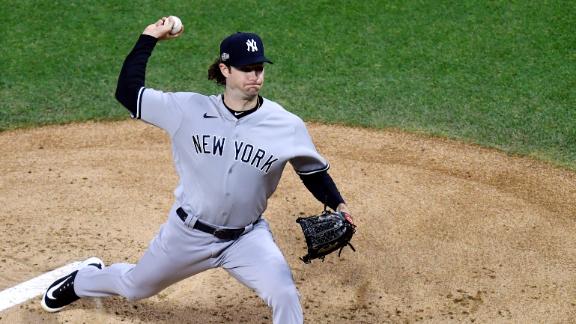 Cole dominates with 13 K's in Yankees postseason debut
Gerrit Cole strikes out 13 in seven innings as the Yankees rout the Indians 12-3 in Game 1 of the ALWC. 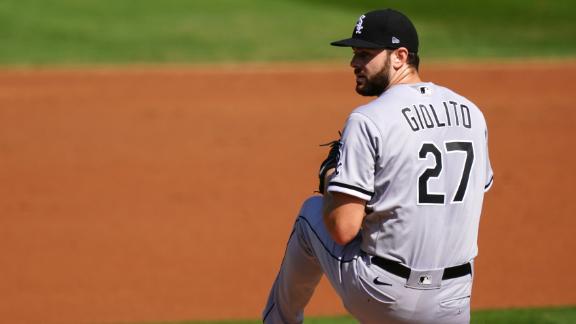 Giolito flirts with perfect game, strikes out 8
Lucas Giolito was perfect for 6 2/3 innings in his playoff debut. He finished with eight strikeouts and allowed just two hits in seven innings as the White Sox downed the Athletics 4-1 in Game 1. 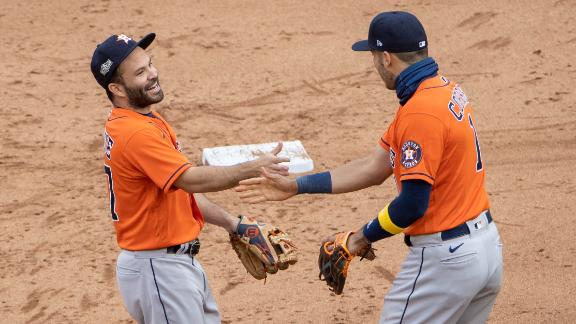 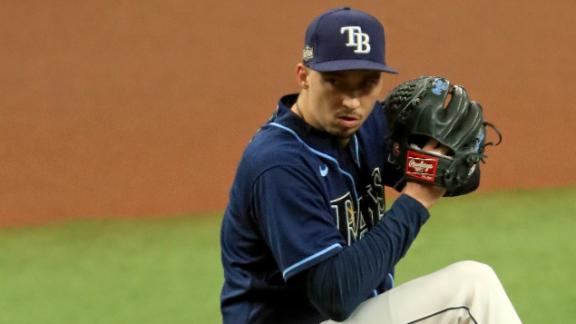