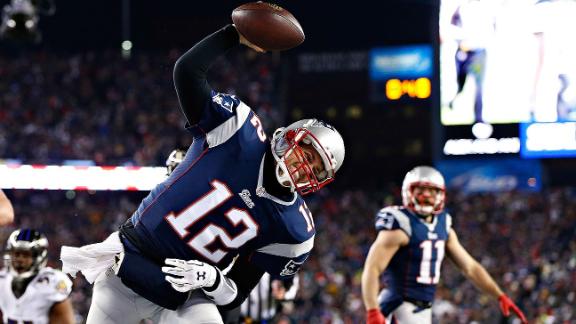 A spokesman for the NFL told ESPN's Chris Mortensen that the New England Patriots' substitutions Saturday night against the Baltimore Ravens were legal from a formation and reporting standpoint.

After his team's 35-31 loss, Ravens coachJohn Harbaugh objected to what he called a "substitution trick" by the Patriots in the third quarter of Saturday's AFC divisional playoff game, saying it was "clearly deception" that he hoped the league would examine.

The Patriots dug into their bag of tricks on their second drive of the third quarter, lining up just four offensive linemen and declaring a normally eligible receiver as ineligible to keep Baltimore off balance.

Ravens players were confused about which Patriots to match up with in coverage, and Harbaugh drew an unsportsmanlike conduct penalty for running onto the field and screaming in objection. Harbaugh said after the game that the officials "didn't understand what was going on."

"We wanted an opportunity to be able to ID who the eligible players were," Harbaugh said. "What [the Patriots] were doing was they announce the ineligible player and then Tom [Brady] would take them to the line right away and snap the ball before we had a chance to figure out who was lined up where. That was the deception part of it. It was clearly deception.

Patriots coach Bill Belichick explained the strategy, which he utilized on three plays and featured four offensive linemen on the field and had either running back Shane Vereen or tight end Michael Hoomanawanui lined up as ineligible.

"It's a play that we thought would work," Belichick said. "We ran it three times, a couple different looks. We had six eligible receivers on the field, but only five were eligible. The one who was ineligible reported that he was ineligible. No different than on the punt team or a situation like that."

Harbaugh said it was a tactic that "nobody has ever seen before." When asked whether he thought it was cheap or dirty, he said he would not comment.

"The league will look at that type of thing, and I'm sure that they'll make some adjustments and things like that," Harbaugh said.

Patriots offensive coordinator Josh McDaniels pulled out the trickery when his team was down by 14 points and the offense had gone three-and-out on the opening drive of the third quarter. The drive resulted in a 5-yard touchdown pass to tight end Rob Gronkowski and frazzled the Ravens' defense.

Patriots Respond To Deception Claims
Bill Belichick and Tom Brady discuss the claim by Ravens coach John Harbaugh that the Patriots used a "substitution trick" in the third quarter of New England's 35-31 win over Baltimore.

Pats' Subbing Pattern Confuses Ravens
John Harbaugh addressed the media on the "deception" by the Patriots when substituting players in the third quarter.

Interception Seals Patriots' Win Over Ravens
The Patriots erased two 14-point deficits and got a critical interception late in the fourth quarter from Duron Harmon to defeat the Ravens 35-31 and advance to the AFC Championship Game.