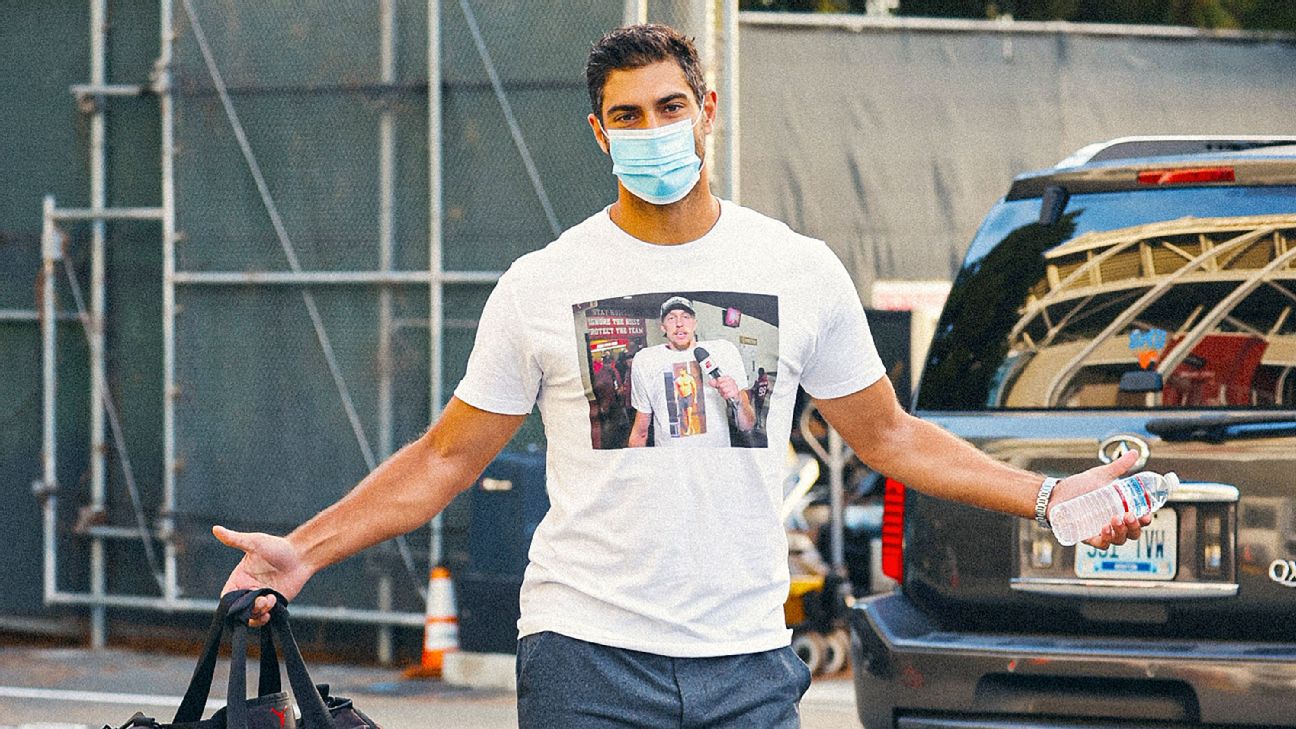 
And then there were some veteran players -- such as Colts quarterback Philip Rivers, Cardinals wide receiver DeAndre Hopkins and Bills receiver Stefon Diggs -- showing off the uniforms of their new teams.

Here's what you need to know from camps across the league:

Jump to the best of the day:

Top news of the day

Mosley hasn't commented publicly, but a source said it was due to family health reasons. Mosley, the highest-paid player on the Jets, was due to make a total of $16 million this year. He already received $10 million in the form of a roster bonus, paid in mid-March. He was scheduled to make $6 million in base pay.

The Detroit quarterback became the eighth member of the team to be placed on the reserve/COVID-19 list. Players are put on the list either if they've tested positive for COVID-19 or have been in close contact with someone who has the coronavirus. It's unclear how long Stafford will be out, per NFL protocol, but the team is scheduled to start strength and conditioning workouts Monday.

The New England Patriots wide receiver became a first-time father in February, and said protecting his newborn daughter, Alia, and family was at the core of his decision. No NFL team has seen more players opt out of the 2020 season than the Patriots.

The New Orleans Saints quarterback on Saturday reiterated his vow to stand with the Black community for social justice, saying it "broke my heart" and was "crushing" that his June comments about disrespecting the flag by kneeling during the national anthem made people feel differently.

Njoku tweeted Saturday that he's "all in" with Cleveland after requesting a trade earlier this summer through his agent. Njoku has had "some good meetings with the new Browns organization including GM Andrew Berry and he has decided to give the team his full commitment right now and go from there," his agent, Drew Rosenhaus, told ESPN's Adam Schefter.

Ryan Fitzpatrick: 'I know I'm the placeholder' for Tua Tagovailoa

Fitzpatrick, the Miami Dolphins' incumbent starting quarterback, knows his position as a bridge to Tagovailoa. It turns out that he's very comfortable with his dual role of leading the 2020 Dolphins on and off the field while also helping to prepare the man who will eventually take his job.

"I don't know how much time it will be before Tua will be in the lineup. I know that I am the placeholder. We've already had that conversation," Fitzpatrick said. "I've told him, 'I'm going to do the best I can to lead this team and win football games when I'm out there.' Whenever it is that Tua gets his chance whether it's early or late or whenever, I'm going to be his biggest cheerleader."

Quotes of the day

The 49ers made it through their week of COVID-19 testing, and some players reported for physicals and to get their equipment on Saturday, a process that will continue on Sunday. Among those reporting Saturday: quarterback Jimmy Garoppolo, linebacker Kwon Alexander, tackle Trent Williams and running back Raheem Mostert. So far, no 49ers have opted out for the season, though two players -- receiver Richie James Jr. and running back Jeff Wilson Jr. -- landed on the reserve/COVID list earlier in the week. If all goes according to plan over the next 48 hours, the Niners are planning to have their first team meeting on Monday. -- Nick Wagoner

Quarterback Deshaun Watson said he's "locked in on being a Texan," but that right now football, not a contract extension, is his "main focus." "My agent knows the time and the time limit, and things like that," Watson said. "My biggest thing, like I've always been wanting to do since I was a little kid, is just play football, win a championship, win games and compete. Like I said before, my agent is taking care of that and that's with him and the organization. Like I said, my main focus is being the quarterback and the leader of this team and making sure we're ready for Sept. 10." On Friday, coach and general manager Bill O'Brien said the team is "working hard" on that extension because Houston wants Watson "here for a long time." -- Sarah Barshop

The Ravens surprisingly cut defensive tackle Daylon Mack, a fifth-round pick last year, in reducing their roster to 80 players. Mack is the first player from Baltimore's eight-player 2019 draft class to be released. He was considered on the bubble after the Ravens drafted two defensive tackles this year. Baltimore selected Justin Madubuike in the third round and Broderick Washington in the fifth. But it was expected that Mack would be given an opportunity to prove himself, which he didn't receive last season. Mack played only one game before being placed on injured reserve in November. -- Jamison Hensley

All the Giants -- minus offensive lineman Nate Solder, who opted out of the season -- are now at training camp after outside linebacker Markus Golden reported by the weekend. He has begun COVID-19 testing and can undergo a physical after three negative results in four days. Then his contract can be finalized and any doubt about whether he will play for the Giants this season will be gone. The Giants used a rare May 5 tender on Golden, and retained his rights when training camp opened. Golden led the Giants with 10 sacks last season and was sixth in the NFL with 27 QB hits. -- Jordan Raanan

Veterans who passed three COVID-19 tests were allowed into The Star for the first time this summer for physicals and other obligations, but coach Mike McCarthy has yet to have full, in-person team meetings. The rookies were off on Saturday. McCarthy's first full meeting is expected to come Sunday. -- Todd Archer

The Jaguars placed nickelback D.J. Hayden (knee) and tight end James O'Shaughnessy (knee) on the active/physically unable to perform list on Saturday. Hayden has been one of the Jaguars' most consistent defensive back since he joined the team in 2018 and has one interception and one forced fumble. O'Shaughnessy had emerged as the Jaguars' top tight end early last season but suffered a torn ACL in a Week 5 loss at Carolina. -- Michael DiRocco

The Jason Peters experiment at right guard is underway. Offensive line coach Jeff Stoutland called Brandon Brooks the best right guard in the game and didn't sugarcoat his absence due to a season-ending Achilles injury, calling it a "tremendous loss," but he said thinks the veteran Peters is up for the task. "This is going to be great for Jason Peters," Stoutland said. "It's just another challenge for him. I think that he's had to play the toughest position in the O-line, maybe in the whole offense for a lot of years, playing left tackle, blind side, being out there on his own, man on an island and one-on-one blocking all day. So that's a hard job, OK, and I think that this can really help us." -- Tim McManus

Among the things Drew Brees did this offseason:

C.J. Mosley's decision to opt out for 2020 due to COVID-19 concerns is another big blow to the Jets' defense. A week ago, they traded star safety Jamal Adams to the Seahawks. This is a massive challenge for defensive coordinator Gregg Williams. The silver lining is their depth at inside linebacker, as they have four players with starting experience: Avery Williamson, Patrick Onwuasor, Neville Hewitt and James Burgess. Williamson, once thought to be potential trade bait, now becomes a key player, assuming he has recovered from ACL surgery. Currently he's on the PUP list, but he should be cleared soon. -- Rich Cimini

After five days of COVID-19 testing, Saturday marked the first full day that players could be granted access to Gillette Stadium, as long as they had three negative tests. Players took part in the traditional photo shoot, in which their pictures are taken for the media guide and television broadcasts. Physical examinations were also on the schedule. -- Mike Reiss

The Panthers opted to reduce their roster to 80 on Saturday in part so they won't have to conduct split-squad practices. In getting there, left tackle Greg Little passed his physical to come off the PUP list. That adds much-needed depth at a position veteran Russell Okung, acquired in an off-season trade, will begin as the starter. Okung is in the last year of his contract, so Carolina could be grooming Little for the future. The 2019 second-round pick was the starter last year before concussions and later a knee sidetracked his rookie season. -- David Newton

Washington secondary coach Chris Harris said the team will use a variety of looks -- from some press to off-man coverages -- as it is expected to use a heavy amount of one-deep looks. That would keep Landon Collins mostly -- but not exclusively -- in the box. He was solid for Washington last season, but the team will want more than that in 2020. "He really shows up when he's in the box," Harris said. "He's an excellent blitzer. He can come off the edge, he creates havoc when he's up close to the line of scrimmage. He creates tackle for losses, and he's kind of like a spark plug." -- John Keim 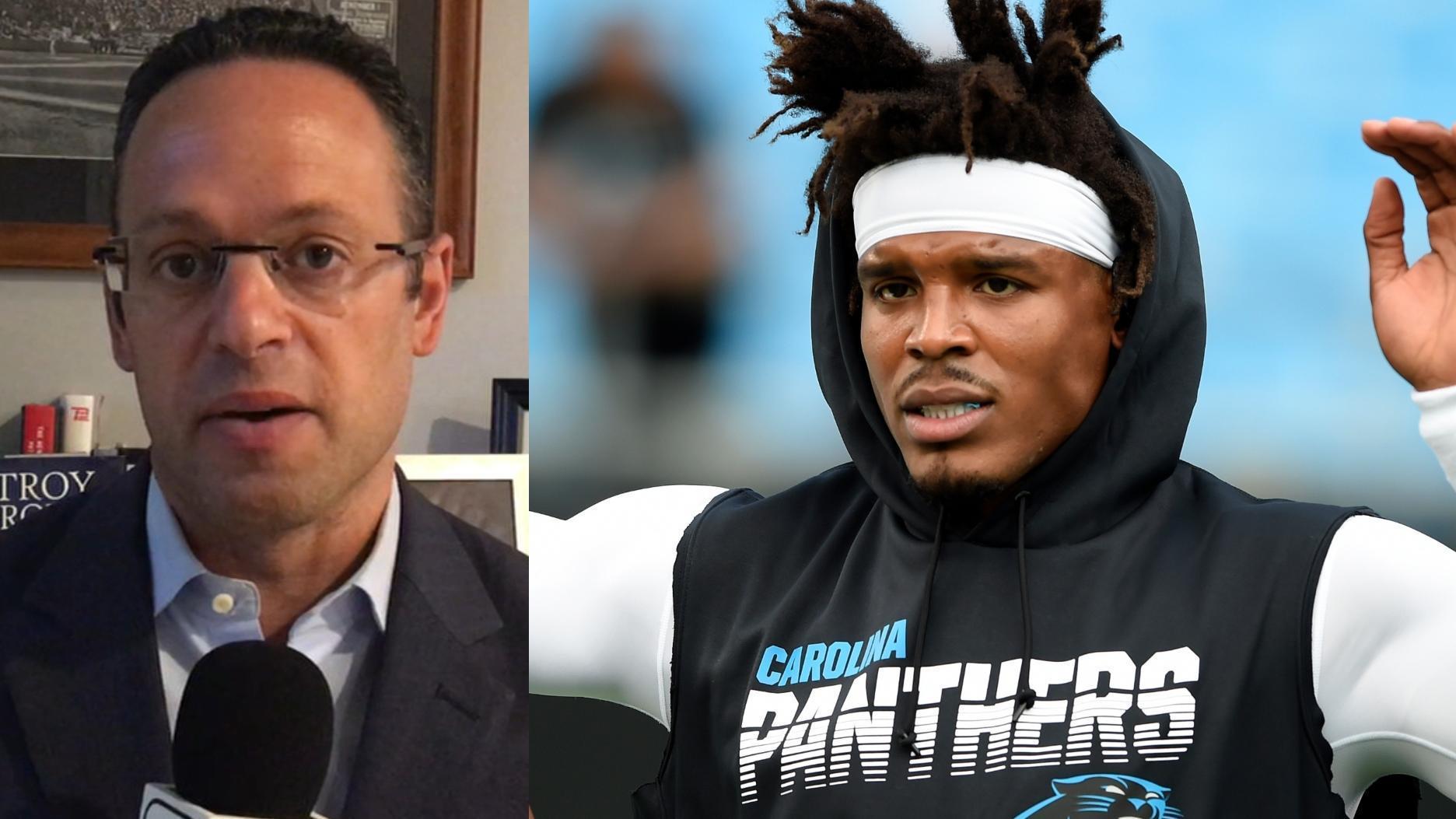