No. 1 Novak Djokovic slips into quarters to meet Kei Nishikori 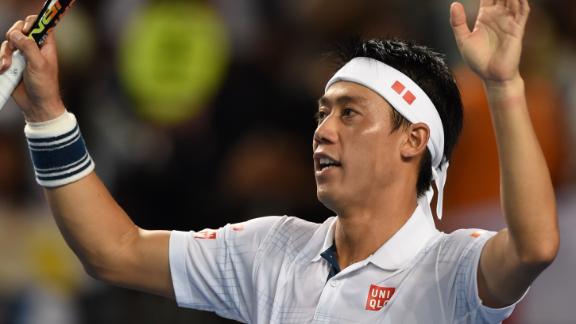 MELBOURNE -- When the fifth set began, the overarching question was whether the scoreboard could display triple-digit numbers.

Over and over, Novak Djokovic missed. His groundstrokes sailed long, his ill-timed drop shots fell short. The final total: a colossal 100 unforced errors, 22 more than he had in his first nine sets combined.

"It would be interesting to see how many drop shot points I won," Djokovic said. "It's probably one out of 40, very low percentage. ... But sometimes it works. It's my game. As I said, I don't think it can get much worse than this. A hundred unforced errors for a match is really tremendous for me, my style of the game. I'm aggressive but still like to construct the point. Too many unforced errors today. I'm going to make sure that I decrease that number at least more than half and hope for the best."

For the first time this fortnight, the day session bled into the evening, pushing back the start of theCarla-Suarez-Navarro-Daria Gavrilova match.

This battle was an epic struggle from the outset. Fifty-two points into the encounter, Simon had not hit a single winner, yet the Frenchman had Djokovic completely flummoxed. Simon avoided going for outright winners, instead opting to extend rallies with off-pace groundstrokes down the middle of the court, waiting for Djokovic to miss. The strategy paid off.

"He's a counterpuncher, one of the best in the game, if not the best," Djokovic said of Simon. "He's been around for years and beaten the big players on this stage. He's not overwhelmed by the occasion. Credit to him for a great match."

How tense was it? At 3-3 in the first frame, Simon overcooked a forehand by just inches after an extended rally, and Djokovic thrust his arms skyward, exulting as if he had won the tournament.

The second set was even more taxing. With game point at 4-4, Simon rushed the net and, with his arms fully extended, flicked an impossible one-handed cross-court winner. It eventually went to a tiebreaker, which the Frenchman dominated, snapping Djokovic's streak of 26 straight victorious sets.

Djokovic rebounded by taking the third. When it concluded, he went to the sideline to change his tattered shoes.

In the ultra-competitive fourth set, Simon broke Djokovic in the ninth game, thanks to a backhand error from Djokovic, and then closed out the frame on yet another blunder from the Serb. What did Djokovic say to himself at that point?

"You don't want to know," Djokovic said to former player and Channel 7 analyst Jim Courier during the on-court interview.

In the fifth, exactly 4 hours, 30 minutes into the match, with Djokovic up 5-2 and pulling away, he finally hit his 100th unforced error, yet another backhand that missed wide. Two games later, Djokovic mercifully ended the match with an open-court backhand winner.

Djokovic showed no emotion. It was perhaps as subdued as he was in the entire encounter. Throughout the match, he struggled to contain his frustration, often sagging his shoulders and peering at his camp. He was seen multiple times on the changeover chair berating himself in a foreign language.

Djokovic did learn an important lesson: As he was walking off the court, a fan yelled out, "No more drop shots!"

"Hate to say it, but you're absolutely right," Djokovic said, drawing laughter from the crowd.

"It's not easy when you're not feeling the ball well and when you're not moving that great," Djokovic said. "When you're playing someone like Simon, he senses that and he makes you play an extra shot. Then you're trying to cut down on the length of the rallies, go for a winner or go for a drop shot. Sometimes you have a brain freeze, if I can call it that way."

Earlier, seventh-seeded Kei Nishikori became the first player to reach the round of eight with a routine 6-4, 6-2, 6-4 win against No. 9 Jo-Wilfried Tsonga.

Nishikori, a step faster throughout the encounter, hit 31 winners to take down the 2008 runner-up at Melbourne Park.

"It's great to finish straight sets always, especially Grand Slam is two weeks, so it's long time," Nishikori said. "Takes some time than usual tournament. It's great to finish quick. But actually, yeah, I'm feeling great. You know, even I think play four or five sets, I should be OK, especially live close. You know, it's easy for body. Yeah, I have good feeling. Yeah, like I said, looking forward to play next one."

For the first time in his career, Nishikori has won consecutive matches against seeded players at the Australian Open.

He also reached the round of eight for the third time. In 2012, Nishikori lost to Andy Murray and last year to Stan Wawrinka.

Nishikori, who has won four of his past five matches against top-10 players in majors and has yet to drop a set through four rounds, knows it's only going to get more difficult against Djokovic.

"Yeah, that gives me a lot of confidence to play against him again, but we played in London and he kind of destroy me," Nishikori said. "It wasn't easy match for me. It's different condition, but I hope I can make some changes and try to play better. Yeah. I'm ready to beat him again."

Tomas Berdych also narrowly dodged an upset by putting away Roberto Bautista Agut in five sets to reach the quarterfinals for the sixth consecutive year.

For Lleyton Hewitt, his career as a professional tennis player has ended.

Three days after losing his second-round singles match to David Ferrer, Hewitt and countryman Sam Groth lost their third-round doubles match to Jack Sock and Vasek Pospisil6-4, 6-2. Hewitt walked off the court and into retirement, receiving a standing ovation in the 7,500-seat Margaret Court Arena.

Frustrating as it was for Djokovic, the numbers are still dazzling. Among the streaks that were extended:

Djokovic avoided becoming the first top seed to lose in the round of 16 since Lleyton Hewitt13 years ago.

For Simon, history was not on his side. No top seed had lost before the quarterfinals of a Grand Slam since Rafael Nadal at the 2009 French Open. And the last Frenchman to beat the top player in a major? Arnaud Clement, who stunned Andre Agassi at the 2000 US Open.

"We all know which player he is and how hard it is to find any solution against him, to somehow stop the fight and feel better on the court," Simon said. "I think I worked on it good today. He made 100 unforced. That's a good number for me, not for him. But fortunately one more time was not enough."