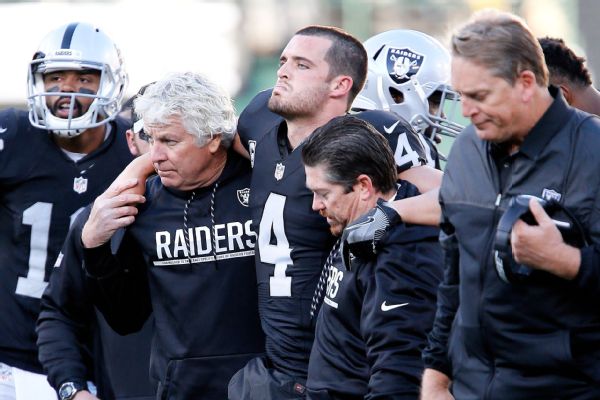 Carr, an NFL MVP candidate, will undergo surgery. Fourth-year pro Matt McGloin will take over as the starter for the playoff-bound Raiders, who improved to 12-3.

The surgery is expected to take place Tuesday, a source told ESPN's Adam Schefter. With an expected recovery timetable of six-to-eight weeks, Carr is expected to miss the remainder of the season.

"It obviously is a blow," Del Rio said. "That's what teams do; teams have to find a way to pick up and move on. We'll rally around the next guy as best we can. That's what you do.

"Thank you to everyone that has been praying for me!" Carr said in the tweet. "Things happen in life that we don't always understand, BUT I do KNOW this. I serve a God that loves me and that is the ultimate healer! I am not worried one bit. I will bounce back and be on my feet in no time! Thank you for all the love that you Raider Nation showed me in that stadium today. I will be back. This is a team sport! So everything WE want is still out there for us! See y'all soon. God Bless and Merry Christmas!

Carr was injured on a second-and-18 play with 11:07 remaining when he dropped back to pass and was caught byTrent Cole, who was on the ground and dived at Carr's ankle, grabbing it and twisting the third-year quarterback to the ground.

In obvious pain, Carr appeared to mouth, "It's broken," as team medical personnel attended to him.

Carr, 25, could not put any weight on his right foot and had to be helped to the sideline. After being examined behind the team bench, he was carted off in an air cast and taken to the X-ray room, where the break was confirmed.

Raiders Pro Bowl left tackle Donald Penn was charged with allowing the sack, the first he has given up this season.

"It's sad, it's very sad," Penn said. "I'm very disappointed in myself ... I was engaged with my guy, I took another step and my foot just slipped from under me. I wish I could have that f---ing play back because I've been blocking great all year, man.

"I slip on one play ... I ain't never got a quarterback hurt in my whole career and I'm just upset right now."

Raiders running back Latavius Murray said Carr was a friend before a teammate, his best friend.

"I feel terrible for him," Murray said. "I know he's strong-minded and he'll bounce back."

And McGloin, who has started six games in his career -- though none since 2013 -- said he is up for the challenge.

"I'm ready to go," said McGloin, a formerPenn Statequarterback. "I feel great and it has been great working with Derek Carr the past few years and working together and seeing what he has done on the field, trying to learn from that. I'm ready to go."

McGloin, 27, entered the day with a career passer rating of 76.2, completing 58.2 percent of his attempts for 1,818 passing yards to go along with 11 touchdowns and 11 interceptions in 11 career games.

Carr, who threw three touchdown strikes and passed for 228 yards while completing 20 of 30 attempts Saturday, was not available to the media after the Raiders stayed in line for a potential first-round playoff bye.

"I'm sure he's sad," Del Rio said of Carr. "But he knows there's a lot of love for him. He'll heal and be ready to rejoin us at some point. Until then, we'll love him up and encourage him to stay strong."