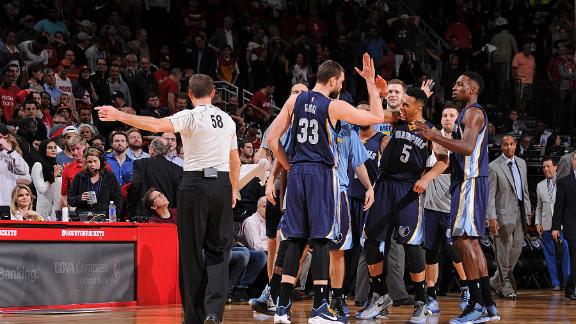 HOUSTON -- At the final buzzer, Rockets coach Kevin McHale had to be restrained by his assistant coaches as he yelled at referee Ken Mauer for a foul call that never came.

Houston was edged by the Memphis Grizzlies 102-100 on Wednesday night on a 10-foot jumper by Marc Gasol with one-tenth of a second to play. It came after Zach Randolph whacked James Harden on the arms during a drive to the basket in the closing seconds with the score tied.

Randolph's move led to boos from the Toyota Center crowd as the Rockets raised their arms in disbelief at the non-call.

McHale, still steaming, slammed a water bottle down on a table after talking to reporters, while Harden and a few other Rockets players had some choice words for the officiating crew.

"What I saw or what I felt?" Harden said when asked about the last offensive sequence. "End of the game, everybody is watching who had the ball. I drove to the basket and I got grabbed on my arms, and nothing was called."

After the Grizzlies grabbed the rebound, they called timeout and set up a last-second play for Gasol, who made a jumper over Terrence Jones for the game winner.

"We did what we wanted to do," McHale said of Harden's drive to the basket. "We tried to get to the rim, and they didn't call the foul."

Harden said he was "very surprised" he didn't get the foul call on his drive.

Randolph, who had 15 points and eight rebounds after missing the previous game due to the flu, smirked when asked about the last-second play.