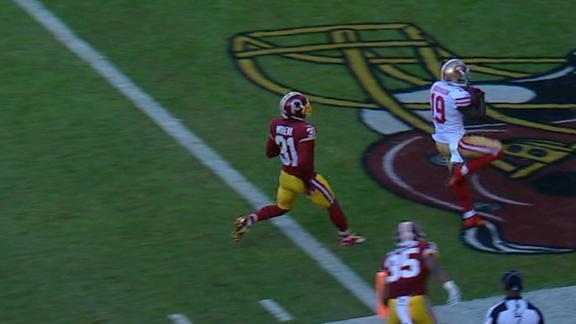 Beathard didn't lead the Niners to a win against the Redskins, but he did enough to keep the job moving forward, Shanahan confirmed after the game.

"I thought he came in and competed," Shanahan said. "By no means were things perfect, but the game is not too big for the guy, and he comes in and doesn't hesitate. He's extremely tough. [He] came in there and gave us a little bit of spark, gave us a few off-schedule plays, which was nice.

"It wasn't perfect, but when you've got a tough guy who makes it in there, I think he'll learn from that."

Sunday's change was spurred by another slow start for the 49ers' offense. Hoyer was 4 of 11 for 34 yards and a passer rating of 45.3 before Beathard replaced him. In the previous four games, Hoyer had not thrown a touchdown pass until the fourth quarter, and that only happened in two of those contests.

Shanahan said he entered Sunday's game ready to make a change if things unfolded how they had in previous weeks.

"C.J.'s had a good week of practice," Shanahan said. "He's put two good weeks together. I had a feeling going in that if it went like that, I had to make the move to give us a chance to win."

Beathard, who had previously played just one snap in a Week 4 loss to Arizona, completed his first regular season pass attempt to tight end Garrett Celek for 13 yards. His first drive ended, though, after two of Beathard's next three passes were dropped.

From there, he seemed to settle in and actually led the Niners to 17 unanswered points to tie the game before a final two-minute drive came up just short. Beathard finished 19-of-36 for 245 yards with 1 touchdown and 1 interception for a passer rating of 72.1. His passer rating was above 90 before he threw the pick on a fourth-and-20 desperation heave.

Although he acknowledged some early nerves, Beathard said he got them out of the way after a couple of plays and felt like he was going to lead the charge to an unexpected comeback win.

"It was great," Beathard said. "We couldn't get anything much going offensively, so we just tried something different. It's something you dream about as a kid, going in and playing your first NFL game. It was cool."

The 49ers selected Beathard in the third round of this year's draft out of Iowa. That he got his first meaningful reps in Washington is a bit of a convenient coincidence, given his family history.

Beathard is the grandson of longtime Redskins general manager Bobby Beathard. The elder Beathard's name is in Washington's Ring of Fame at FedEx Field. His name hangs in the same corner of the end zone where Beathard threw his first-career touchdown pass to receiver Aldrick Robinson with 1:58 to play.

"There in warm-ups, you look up and see grandpa's name right on the stadium, and I think it's just really cool," Beathard said. "He is just a tremendous person. I have learned so much from him, and I'm just trying to be like him any chance I can."

Hoyer, meanwhile, will head back to the bench after starting the first six games. He signed a two-year deal with the 49ers in free agency this year and entered the season as the clear-cut starter for the first time in his nine-year career.

"Obviously, you're disappointed," Hoyer said. "I've been through it before. I have the utmost respect for Kyle, and I just knew nothing I was going to say was going to change his mind. I just tried to go on and be a good teammate. [I] tried to help C.J. as much as I could. I was happy for him. He played well."

Now, Beathard will get his first opportunity to have a full week of practice as the starter. In the previous six weeks, he got reps here and there with the starters, but those are considered common practice -- in case he needed to play in the game.

Still, Beathard said that won't change his approach much.

"I'm just taking it one day at a time," Beathard said. "I'm going to watch this tape, and there's a ton of stuff to learn from. This was my first time playing in an NFL game, and there's a lot of stuff I can learn from and get better at."