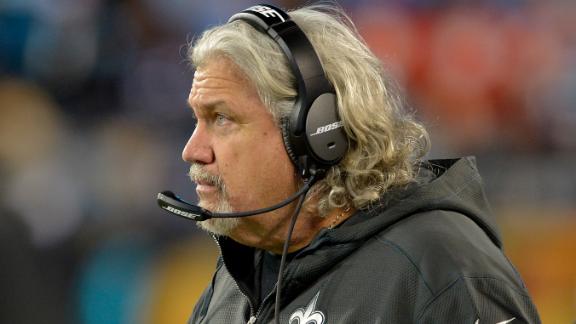 But one thing Ryan said he hasn't experienced much is the kind of sophomore slump the young Saints defense has gone through this season, tumbling from fourth in yards allowed in 2013 to 31st in 2014.

And Ryan seconded what some of his players have acknowledged -- they might have gotten too caught up in the preseason praise and lofty expectations being heaped on them.

"Obviously we drank the Kool-Aid a little bit too much, I think. And if they don't think so, I think that's wrong. I think that's an honest opinion," Ryan said. "I think we forgot how we had success [last year]. You know, the 'Nola' defense, where nobody likes our ass. That's how we played better, when our backs were against the wall, when we had a lot to prove.

"I think we didn't get soft in a year's time, but certainly we could have played better and started faster. And it cost us early in some games, and then we're treading uphill the rest of the year."

Ryan didn't want to speculate much on his job security Friday. The Saints have one game remaining, Sunday at the Tampa Bay Buccaneers. But he said he's used to it after being fired by the Dallas Cowboys two years ago and being part of staffs that were replaced in Cleveland and Oakland.

"If I get a chance, that'd be awesome. But, hey, the numbers are what they are. They don't look good," Ryan said. "But hell, it is what it is. This is a win business. And, hey, this is a 'tough-people' business, too. So I'll be great with whatever happens."

Ryan insisted, however, "If I'm back, I'm gonna start [the improvement] with me."

"Whatever I can do better, whatever we can do better ... if I have that opportunity," Ryan said. "If I don't, then I'm still gonna look in the mirror and make sure I do things right. But I've been coaching a long time. The best way for me is to be myself, and usually that works. Obviously I haven't finished this low in a long time in the second year of something. I mean, this is a little different. So I gotta make sure it's right."

The one positive this season, Ryan believed, was the way players responded to the tough times and got "tighter" as the year continued.

"Maybe we're not the best defense in the league, but I think we're a pretty tight group, and I think it'll help us down the road," Ryan said.

The season-ending knee injury to major free-agent signing Jairus Byrd certainly didn't help. But the Saints were struggling mightily during the first four weeks even when Byrd was healthy.

Most of New Orleans' problems stemmed from a drop in production across the board, from the secondary to the defensive line, with a lot of the same players who were breakout stars in 2013.

Ryan's job status has been under the microscope all year because of the defense's stunning collapse, and because of a handful of moments when coach Sean Payton was captured on tape shouting at him on the sideline after things like substitution penalties.

But Payton passionately supported Ryan after some reports came out that a personal rift existed between the two. Payton said he admired Ryan's passion and tireless work ethic and even offered the ultimate compliment of saying Ryan could have worked for Payton's mentor, Bill Parcells.

And players have done the same at every turn, from young players to veterans, saying that they've felt like they let Ryan down this season.

"I think Rob is one of the best defensive coordinators I've ever been around and played for," linebacker Curtis Lofton said. "I think throughout the year he stayed confident in himself and us. But at the same time, as a coach, you can call the greatest plays, but the players gotta go out and execute. And we let him down this year.

"But we all love Rob, and we would run through a wall for Rob."

When asked if there's any need for players to express that to management, Lofton said, "I think they know exactly how we feel. That's not in our job description, but if I was asked I would repeat to them what I just told you guys."