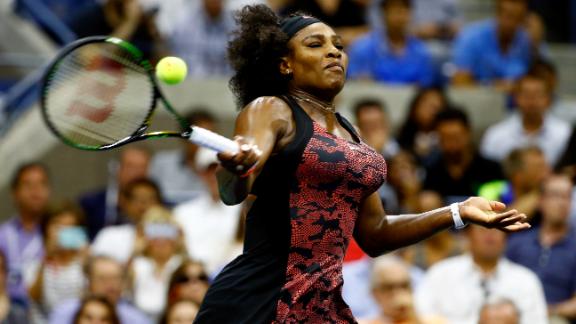 And for the 11th time, Serena prevailed.

The 6-2, 1-6, 6-3 victory over older sisterVenusleaves her two matches from a rare and exhilarating history.

If Serena can beat unseeded Italian Roberta Vinci in Thursday night's US Open semifinals, she'll play for the calendar-year Grand Slam on Saturday.

This was the sentimental, back-to-the future, ascendant Venus story line that so many had hoped for, a legitimate battle between two sisters from Palm Beach Gardens, Florida, who have been trading rallies for most of their lives.

Afterward, after Serena ripped a 107 mph ace to end it, she appeared to wipe a tear from her eye, and the two embraced warmly at net.

"It's a really great moment," Serena, the top seed, said in her on-court interview. "She's the toughest player I ever played in my life, and the best person I know. So it's going against your best friend and going against, for me, the greatest competitor in women's tennis."

The match ran 98 minutes, but it felt a lot longer -- especially for the Williamses.

"This was a big moment for Venus and I," Serena said. "It's a Grand Slam, so we both want to do the best that we can.

"It wasn't really easy today at all."

Incredibly, less than three weeks from her 34th birthday, Serena is still in her soaring prime.

And Venus described her as "the best ever."

"I think she is the best ever because of the level of competition that she's faced. There have been some unbelievable players in the past," Venus said. "I have played the best from different eras, as well. I have seen the level of competitiveness go up, and I have seen players who are ranked 100 who didn't believe they could win a match against you, to this point, fight you tooth and nail and try to take you down.

"That didn't happen when I started. So just to be able to win at this level, I think that's what makes her the best."

Serena has now won 26 consecutive major matches in 2015, and 33 straight going back to last year's US Open.

How badly did Serena want to win this one? She actually tried to run the oldest woman in the draw ragged -- and succeeded.

With all of her power, the drop shot is often an underused weapon in her tool box. And exploiting one of Venus' weaknesses -- mobility -- Serena forced her to the net.

On one memorable and telling exchange, Serena hit a drop, then carved a looping lob that Venus made no move for.

In fact, there were a number of occasions when Venus was left flat-footed to watch one of Serena's 35 winners sail past, to say nothing of the 12 aces.

At the outset, at least, there were none of the muted emotions we've seen between these two in the past.

They came out swinging and went right at each other -- albeit, while rarely maintaining eye contact.

Serena, in particular, was loud early and often, perhaps the most emotional she's ever been in one of these sister-sister contests.

The pivotal break came in the fifth game of the first set, when Serena executed a drop shot and drilled a great forehand crosscourt that Venus could only dump into the net.

Serena went on to win the set easily, which was important because the winner of the first set in their previous meetings won 22 of 26 matches.

The match changed markedly in the fourth game of the second set, when Venus forced her first break points.

She collected the second for a 3-1 lead when Serena, in her first show of nerves, hit a second serve a foot below the tape.

Venus, the No. 23 seed, dug out the second set, and her sister's Grand Slam aspirations hung on a single, ultimate set.

"It's really great to see her do so well," Serena said. "She was at an unbelievable level today. Down to the match point, it just was not easy. It's probably the toughest match I have played in a really, really, really long time where I wasn't actually beating myself. I was out there facing an incredibly tough opponent."

Serena struck first and fatally in the final set, handling a difficult body serve and rifling a backhand winner down the line for a break and a 2-0 lead.

This is why Serena has won 21 majors: Serving at 2-0, Serena faced yet another break point.

She responded with a 110 mph ace down the middle and, mindful of her sister, privately exulted along the baseline. Serena followed that with a 121 mph offering, her fastest of the night, then held for a 3-0 lead.

"When I'm playing her, I don't think of her as my sister," Serena said. "Holding serve in the third set was all I could do."

However, off the court, their bond remains tight.

"I think [Serena completing the Grand Slam] would be huge, not just for me, but for my family, just for what it represents and how hard we have worked and where we come from," Venus said. "So it would be a moment for our family.

"But at the same time, if it doesn't happen, it's not going to make or break you. We don't have anything to prove. She has nothing to prove."

Serena now leads the head-to-head series with Venus 16-11 and has won seven of the past eight meetings. 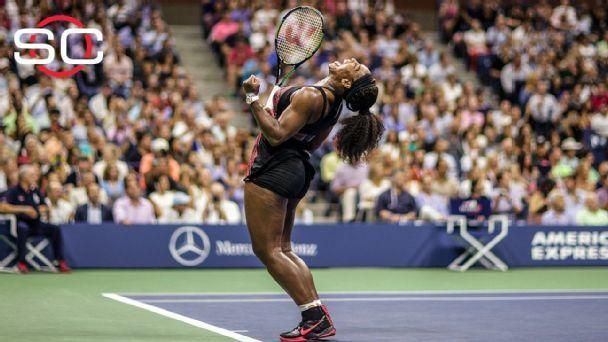 Five Things We Learned: Day 9
ESPN's Peter Bodo and Greg Garber breakdown the five things they learned from Day 9 at the US Open.

Serena and Venus' sweet hug after little sis wins
Serena Williams wins her US Open quarterfinal match on an ace, and after the handshake with sister Venus, the two share a hug at the net.