Sixers win NBA lottery for top pick; Lakers get No. 2, Celtics No. 3

ESPN
By Ohm Youngmisuk
NEW YORK -- After losing a total of 199 games over the past three seasons, the Philadelphia 76ers finally were rewarded for their rebuilding/tanking plan.

"The city has endured a lot over the past three seasons," Brown said after the Sixers finished ahead of the Los Angeles Lakers and Boston Celtics in the top three. "I felt like we were doing the right things all along the way. We were never skipping steps. We put in good days. Our process was questioned. At times fair enough."

Brown said the Sixers have not decided yet who they will pick to add to a young roster that already includes Jahlil Okafor and Joel Embiid, who were selectedthird overall in each of the past two seasons.

"I never felt jinxed," Brown said of the Sixers picking third overall the past two years and averaging 66 losses a season over the past three years. "I truly believed in what we were doing, and in many ways, I feel like we have been rewarded for the patience and perseverance, especially the city's perseverance."

No team moved up in the lottery, but the Lakers left New York City probably feeling a bit like lottery winners too. After finishing a dreadful 17-65, the Lakers still were in danger of having to surrender their first-round pick to Philadelphia if it landed outside the top three, due to the protections negotiated into the 2012 Steve Nash trade.

The worst-case scenario did not happen, and Lakers general manager Mitch Kupchak can start the post-Kobe Bryant era with perhaps either Ingram or Simmons, depending on what the Sixers do.

"To have a season like we had and not have something to show for it is not the way we wanted it to go," said Kupchak, who drafted D'Angelo Russell with the second overall pick last year. "Have we gotten used to having Kobe around? Yeah ... not having Kobe around, that's an adjustment. Absolutely. It's been a 20-year run."

"Trust me, everybody up there, even if they don't have a contingency like we did, is very nervous," Kupchak said in describing anxious moments on stage during the lottery. "What made our situation unique is we ended up No. 2 [but if we] fall to 4 or 5 [we] lose the pick. That adds to the drama that really, at this stage in my life, is unnecessary."

There was some drama hours before the lottery began, when former Sixers All-Star centerDikembe Mutombotweeted congratulations to the club for winning the firstoverall pick. A Sixers employee emailed Mutombo and asked other former players to tweet support for the team in the event they did win the first overall pick.

Mutombo cut and paste a congratulations message and accidentally tweeted it out several hours before the lottery was determined, which created a stir on social media.

"I was trying to congratulate the Sixers if they win the draft," Mutombo said when reached by telephone after the lottery. "For some reason I made a mistake. I'm just laughing so hard about what people are saying [online]. It's funny."

"[People are] posting all these funny videos of me laughing in the All-Star Game, my reaction during the Dunk Contest," Mutombo added. "It's making me laugh. But I also want to make sure that people should not be thinking about anything negative [from the mistake]."

As Kupchak said, "Dikembe should go to Vegas tonight. That's what he should do."

The Boston Celtics were hoping to erase negative luck at the lottery after being haunted by the lottery ghosts of Tim Duncan and Len Bias in the past. The Celtics, who had never owned the first overall pick in the draft era, own three first-round picks, including the Brooklyn Nets' pick from the Paul Pierce-Kevin Garnett trade.

But the Nets' pick didn't move up, as Boston had hoped. Boston will instead hope for better luck in the future, when it can swap picks with Brooklyn next year while owning the Nets' first-rounder in 2018, along with Memphis' top-eight protected pick in 2019.

Boston had to be hoping to get a crack at Simmons or Ingram.

Ingram is a 6-foot-9 swingman who averaged 17.3 points and won Atlantic Coast Conference freshman of the year honors.

Simmons is a 6-foot-10 forward from Australia who was widely considered the top freshman in the country upon entering the 2015-16 college season. He was the only player to average more than 19 points, 11 rebounds and four assists this season.

"I coached Ben's father a long time ago," said Brown, who coached the Australian men's national team and was also head coach of the Sydney Kings of the Australian National Basketball League. "I've known Ben since he was born. I've known his family since the late '80s. Just having that knowledge of where he was raised and understanding the culture, I also lived 17 years in Australia."

"There are a lot of different connections to make me better informed how to help our organization make a calculated decision," Brown added of the Sixers, who recently hired Bryan Colangelo to replace Sam Hinkie as president of basketball operations. "[Ben Simmons] is an extremely talented man, and I think he comes from great stock with his family."

Brown has maintained an unshakable optimism and enthusiasm despite going 47-199 as Sixers coach. Now he could be coaching a franchise-altering star prospect next season.

"The pain that we all go through, the pain of losing is real," Brown said. "You can't camouflage it. This city has been incredibly patient and tolerant, choose whatever word that you want.

"I feel like this does maybe validate a little bit about some of the pain we have gone through."

The NBA draft is June 23 in New York. 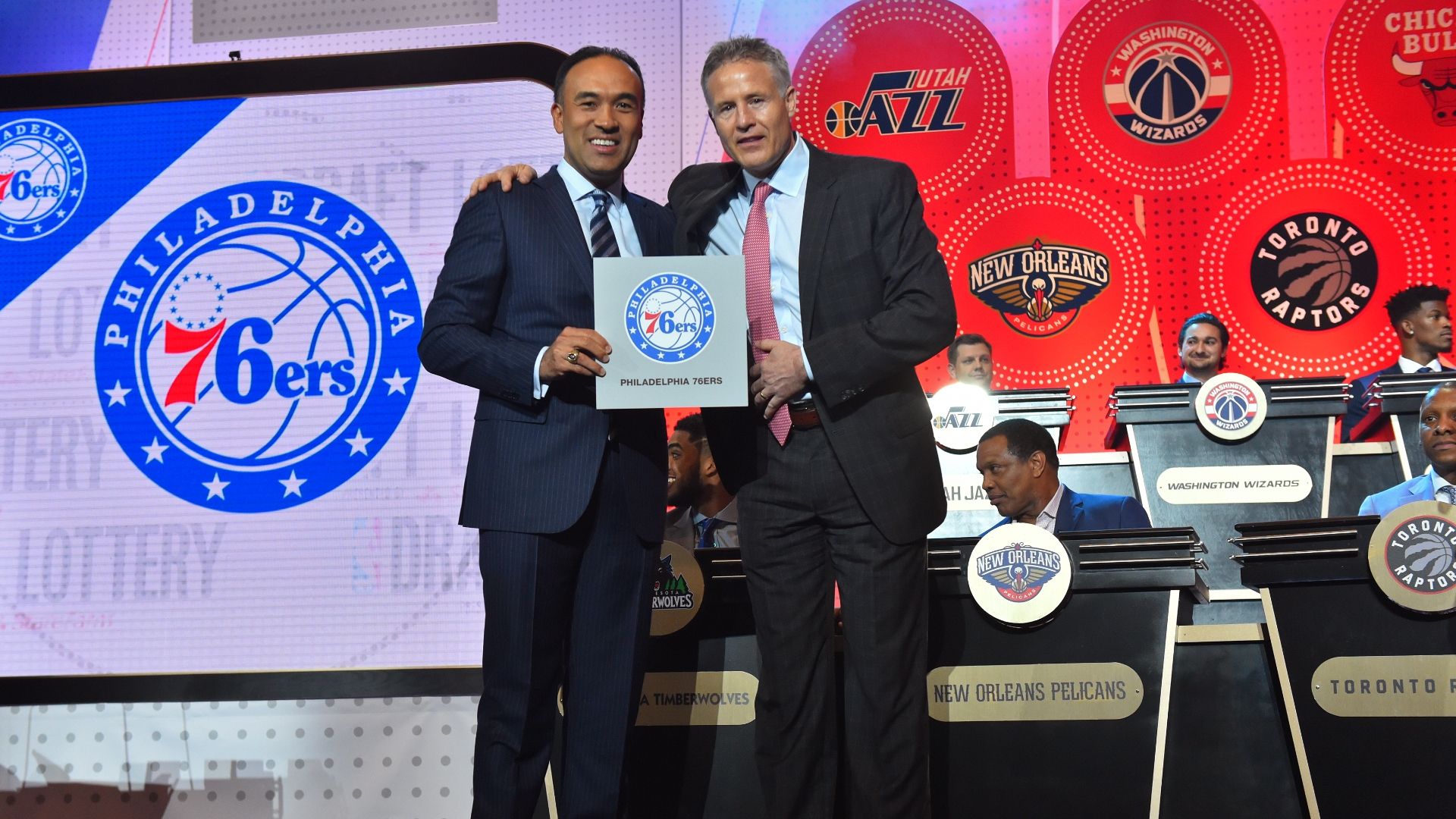 Is the 76ers' suffering over?
After three years of poor play, the (ping-pong) ball finally falls Philadelphia's way, and head coach Brett Brown is just as excited as the city.