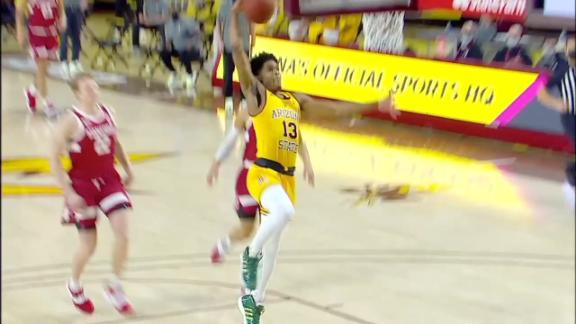 
BOTTOM LINE: Pac-12 foes meet as Stanford battles Arizona State. Each squad is coming off of a victory this past Thursday. Arizona State earned a 72-68 win at home against Cal, while Stanford got a 73-64 win at Arizona.

ARE YOU EXPERIENCED: Arizona State has been fueled by senior leadership this year while Stanford has relied on freshmen. Seniors Josh Christopher, Remy Martin, Alonzo Verge Jr. and Holland Woods have collectively accounted for 63 percent of Arizona State's scoring this season. On the other side, freshmen Oscar da Silva, Michael O'Connell and Noah Taitz have collectively scored 37 percent of the team's points this year and have accounted for 39 percent of all Cardinal points over their last five.

CLAMPING DOWN: The Sun Devils have allowed just 75.4 points per game to conference opponents thus far. That's an improvement from the 79 per game they gave up to non-conference competition.DOMINANT DA SILVA: da Silva has connected on 37 percent of the 27 3-pointers he's attempted and has made 4 of 9 over his last three games. He's also converted 75.5 percent of his foul shots this season.

UNDEFEATED WHEN: Stanford is a perfect 9-0 when it scores at least 73 points. The Cardinal are 1-5 when scoring any fewer than 73.

ASSIST-TO-FG RATIO: The Sun Devils have recently gotten baskets via assists more often than the Cardinal. Arizona State has 41 assists on 78 field goals (52.6 percent) over its previous three contests while Stanford has assists on 34 of 72 field goals (47.2 percent) during its past three games.


DID YOU KNOW: The diligent Arizona State offense has turned the ball over on just 15 percent of its possessions, the 14th-lowest mark in all of Division I. 21.5 percent of all Stanford possessions have resulted in a turnover.

This was generated by Automated Insights, https://www.automatedinsights.com/ap, using data from STATS LLC, https://www.stats.com