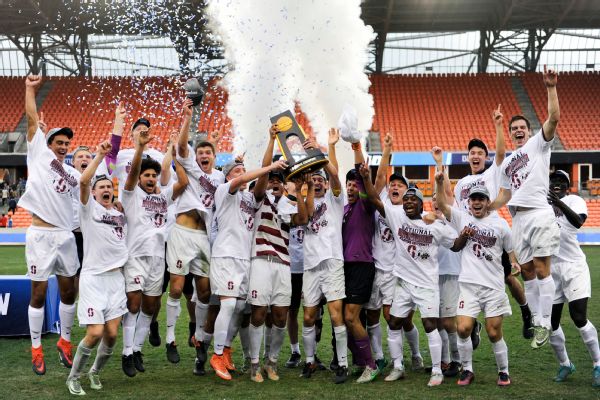 HOUSTON -- When Stanford goalkeeper Andrew Epstein started to lift himself off the ground after his game-winning save in penalty kicks on Sunday, all he saw were his teammates racing towards him.

At first, he wasn't sure it was over.

Once his teammates made it 20 yards down the field in celebration, Epstein knew they had beaten Wake Forest and were back-to-back national champions.

"At that point you're just so happy," said Epstein, who had four saves in regulation and two more in the shootout. "It's your favorite friends walking up the field towards you. It's a pretty special sight and I'm lucky to have seen that two years in a row with my teammates flying on me. That's a great feeling."

Epstein made a pair of diving stops and Corey Baird and Sam Werner scored Stanford's final shootout goals to give the Cardinal their second straight College Cup title, 5-4 over Wake Forest after the teams played 110 scoreless minutes.

Stanford didn't allow a goal in the tournament, becoming the first team since Wisconsin in 1995 to accomplish the feat and win the national championship.

The game was the sixth national championship to go to penalty kicks, and the first since Virginia beat UCLA in 2014.

"Going into winter something felt a little missing, like we had to take that time to encourage and develop every single one of our players into something like those guys were last year," junior Drew Skundrich said. "Over time we did that. We did very well in spring, everyone trained well over summer and we got after it right away in preseason.

"Dropping those first few games just made us realize this is a new year, a new team, new challenges and we need to take everything we can to get back to this stage and that's what we did," he said.

Wake Forest finished 19-3-3. Stanford beat Wake Forest 2-1 in overtime in the quarterfinals last season on the way to its first national title.

"We had the opportunity to win the game today in penalties," Wake Forest coach Bobby Muuss said. "I felt comfortable and confident with the group of guys that were stepping out there but it just wasn't our day unfortunately."

Cardinal coach Jeremy Gunn improved to 4-1-1 in the College Cup. Prior to leading Stanford to the national championship last season, Gunn guided Charlotte to the 2011 College Cup as well.

"It's an exciting journey every time a college coach starts the year with a team and we've been fortunate to be standing at the end of the season a couple of times," Gunn said.

Wake Forest came out firing in the second half, recording three shots and a corner in seven minutes.

Stanford answered with its attack and Wake Forest goalkeeper Andreu Cases Mundet was solid. In the 71st minute, Mundet saved a shot while on his back, somehow keeping the ball from crossing the line fully. Seven minutes later, he made a dive to the left to deflect away Adrian Alabi's header.

The opening 30 minutes belonged to Stanford, with the Cardinal outshooting Wake Forest 4-1 and holding a 3-1 edge in corner opportunities. Two of the corner attempts came in the opening five minutes.

Wake Forest ended up outshooting Stanford 10-9, and leading 5-4 in corners.

BACK TO BACK CHAMPS

The field conditions were a topic of conversation all weekend at BBVA Compass Stadium.

On Friday, following Wake Forest's 2-1 win against Denver, Muuss remarked it was like playing on "sand" and after Sunday's season finale, the comments weren't much better.

"I think it's disrespectful to college soccer," Muuss said when asked about the field conditions. "What happened this weekend I think it's a catastrophe for our game."

The field was replaced in the middle of last MLS season, which meant it isn't in prime condition yet, which Muuss believes shouldn't be the case for a match like a national championship.

"The field didn't lose the game for us today, it just made for pretty sloppy NCAA Final Four, which is supposed to be the pinnacle of college soccer," he said. "The programs and everybody that hurts college soccer or talks badly about college soccer is the professionals and we just played soccer in a professional stadium. So the stadium had nothing to do, it was out of their control, but I feel like it's a catastrophe for college soccer."
Related topics:
sportsespnsoccerwake forest demon deaconspenalty kicksshootoutncaa mens soccerpksstanford cardinaltitlencaa mens soccer national championship
Copyright © 2021 ESPN Internet Ventures. All rights reserved.
More Videos
From CNN Newsource affiliates
TOP STORIES