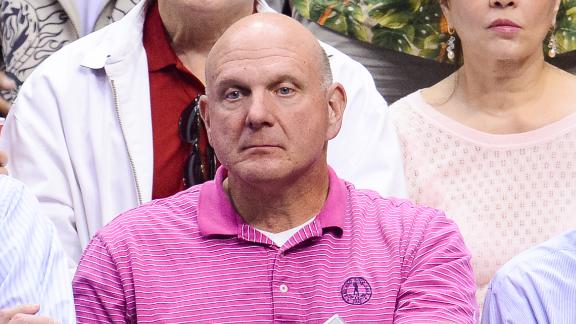 The Los Angeles Clippers officially have a new owner.

Steve Ballmer's bid to purchase the Clippers closed Tuesday after the entry of an order by a California court confirmed the authority of Shelly Sterling to sell the team on behalf of the Sterling Family Trust, the league announced.

Ballmer, the former Microsoft CEO, bid $2 billion for the Clippers in May but wasn't able to complete the sale until Tuesday's written court order affirmed Shelly Sterling's authority to sell the franchise without the consent of her husband, Donald Sterling.

"It's very, very exciting. I'm a basketball nut," Ballmer said in an interview with ESPN's Ramona Shelburne. "I've got time. I love Los Angeles. I love Seattle, too, which is where we have our home. But the notion of spending a lot of time in Los Angeles has been exciting to me for years. The community down there is great. I look forward to supporting the community, the fan base, the staff, Doc [Rivers] and the players to take this thing to higher heights."

Ballmer acknowledged there were some frustrating moments while the sale of the franchise was delayed by court proceedings but said he remained confident he'd be able to complete it.

"My job has been to complete the deal and there were a lot of people, including me, working on it for a long time," Ballmer said. "Was I kind of itchy? Sure. But I knew the only thing I could do or should do was complete the final deal, and we were able to do that this morning."

The NBA's board of governors interviewed Ballmer on July 15, then took a vote electronically last week in which he was unanimously approved as an owner, sources told Shelburne.

Ballmer decided he would complete the sale as soon as Superior Court Judge Michael Levanas' written order came in, which occurred at 11:30 a.m. ET Tuesday.

"We were ready," Adam Streisand, Ballmer's attorney, said. "Within minutes, the deal was signed, sealed and delivered."

Ballmer plans to travel to Los Angeles later this week and have dinner with the team, then meet with Clippers employees and fans at an event Monday.

Ballmer's takeover of the Clippers follows weeks of legal tussling between Shelly and Donald Sterling, the 80-year-old billionaire whom the NBA banned earlier this year for making offensive remarks about blacks.

However, sources also told Shelburne that attorneys for Donald Sterling and Shelly Sterling recently have been discussing a settlement.

The NBA, meanwhile, has filed a counterclaim in federal court against Donald Sterling and the Sterling Family Trust, saying he caused "devastating and incalculable harm" to the league. The counterclaim was in response to an antitrust lawsuit Sterling filed in June against the NBA and commissioner Adam Silver seeking $1 billion in damages.

Ballmer was one of at least six bidders to express serious interest in owning the Clippers, who were bought in 1981 by Sterling for $12.5 million. The three highest bids were $1.2 billion from a group including former NBA player Grant Hill and Los Angeles businessmen Bruce Karsh and Tony Ressler; $1.6 billion from a group fronted by music mogul David Geffen; and $2 billion from Ballmer.

Shelly Sterling signed an agreement to sell the team to Ballmer on May 29, then was forced to secure a court order to confirm her authority as sole trustee to go ahead with the sale.

"I am thrilled that the Clippers now have such a wonderful new owner," said Shelly Sterling, who as part of the deal was given the title of "Clippers Number One Fan" and "owner emeritus." "I am happy for the team, the fans, the sponsors and the city of Los Angeles."

Drafts of the Clippers' sale bid book, given to bidders by Bank of America and obtained by ESPN.com, revealed that the $2 billion price would be 12.1 times the expected 2014 revenues of the team. The bid book noted that the highest previous sale was the record that Ballmer beat, that of the Milwaukee Bucks, who sold for $550 million this year and a then-record five times total revenue.

Ballmer defended the amount of his bid in the interview with Shelburne.

"Lots of people run lots of numbers," he said. "I feel like I paid a price I'm excited about. It obviously was a price that was negotiated, and I feel very good about it. It's not a cheap price, but when you're used to looking at tech companies with huge risk, no earnings and huge multiples, this doesn't look like the craziest thing I've ever acquired. It's my own personal money, and you're just as careful with your own money as you are with your shareholders' money.

Ballmer previously had been involved in a failed bid to buy the Sacramento Kings and relocate them to Seattle. On Tuesday, he put to rest any thoughts of relocating the Clippers, saying: "There's a hundred reasons [not to move them]. ... I'm all-in on the Los Angeles Clippers."

"The Clippers are more valuable in Los Angeles," Ballmer told ESPN. "It's a phenomenal city, a phenomenal market, phenomenal everything. I like Los Angeles and there's an opportunity to spend some time there in addition to Seattle. That is phenomenal.

"The NBA has made it clear they want fan bases to be able to keep their teams. I know that firsthand, because we did take a whirl at moving Sacramento and that didn't work. I'm all in on the Los Angeles Clippers. We're moving forward. We've got to work to be the best we can be to take advantage of all the assets in the community."

The official sale of the team to Ballmer caps a tumultuous few months for the organization, starting when Donald Sterling's racist comments to his girlfriend, V. Stiviano, were publicized by TMZ in April.

Last month, Clippers All-Star point guard Chris Paul said it would be "unacceptable" if Donald Sterling still owned the team when the 2014-15 season began. Rivers, meanwhile, had said he wouldn't want to continue as the Clippers' coach if Sterling remained in that position.

"I couldn't be more excited to work together with Steve as we continue to build a first-class, championship organization," he said in a statement released by the team. "I am already inspired by Steve's passion for the game, his love of competition and desire to win the right way, and I know our players and fans are going to be inspired as well."

Paul and several other players concurred.

"I am very excited about Mr. Ballmer's purchase of the Clippers," Paul said. "I've had a chance to meet him, and his excitement for the game of basketball and our team is going to be great for the league, the city of Los Angeles and Clipper fans everywhere."

Added All-Star forward Blake Griffin: "Today is a great day for the Clipper organization and fans everywhere. I look forward to having Mr. Ballmer as an owner and continuing our pursuit of a championship."

Information from ESPN's Darren Rovell and Jeff Goodman and ESPNLosAngeles.com's Arash Markazi was used in this report.

Sale Of Clippers To Ballmer Finalized
Arash Markazi discusses the news that Steve Ballmer is the new owner of the Clippers.