Steve Kerr says being called out by President Trump was 'surreal' 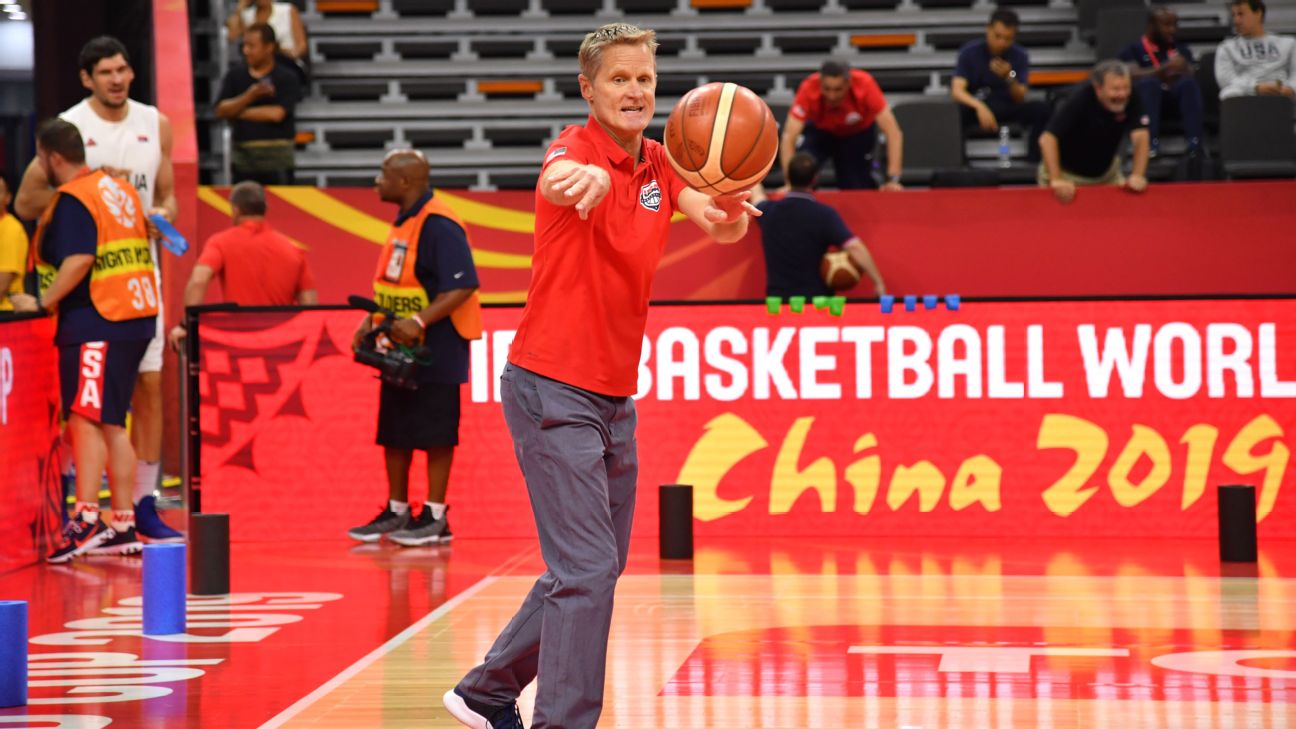 SAN FRANCISCO -- A day after being called out by name by President Donald Trump in the wake of the NBA's ongoing situation in China, Golden State Warriorscoach Steve Kerr described his own situation as "surreal" while pushing back against the president's comments.

"It was really surprising," Kerr said prior to Thursday's preseason game against theMinnesota Timberwolves. "But mainly just because it was me. Then you stop and you think, this is just every day. This is just another day. I was the shiny object yesterday. There was another one today; there will be a new one tomorrow. And the circus will go on. It's just strange, but it happened."

Kerr drew Trump's ire in a Wednesday news conference after Kerr, a frequent critic of the president, initially declined to comment on the NBA's handling of the ongoing backlash surroundingHouston Rocketsgeneral manager Daryl Morey's tweet supporting anti-government protesters in Hong Kong. Kerr, who has been outspoken on many social issues he feels passionately about over the years, said he wanted to learn more about the situation before fully commenting. After watching the video, Trump said Kerr looked like "a scared little boy," something Kerr made reference to in his initial remarks Thursday.

"If we had been thinking earlier I was going to ride in on a tricycle," Kerr said. "With one of those beanies with the propeller -- because he called me a little boy."

Kerr found out about Trump's remarks on Wednesday just minutes after conducting his daily news conference with the media. As he tried to process the ramifications of being called out publicly by the president, Kerr said he thought back to how he felt the office of president has changed over the years.

"I was thinking about my various visits to the White House," Kerr said. "I've lived a privileged life and met, I think, the past five previous presidents prior to President Trump. The first one was in 1984, and Ronald Reagan was president. He invited my mom and me, six months after my dad [Malcolm] was killed in a terrorist attack. President Reagan and Vice President [George H.W.] Bush invited us into the Oval Office, spent about half an hour with us thanking us for my dad's service -- he was in education. Thanking us for my dad's commitment to American values in the Middle East. Trying to promote peace in the Middle East. And all I could think of last night was the contrast of what has happened in 35 years. There was no regard for whose side you were on politically. Political party, anything like that. It was just, you were an American. The office held such dignity and respect. Both from the people who were visiting and especially the people who sat inside it. It's just sad it's come crashing down. That we are now living this.

"I realize the horse was out of the barn a long time on this. But for me personally, this was my experience with, wow, has the office sunken low. My hope is that we can find a mature unifier from either party to sit in that chair and try to restore some dignity to the Oval Office again, and I think it will happen."

Kerr said the backlash the league has received in China and the criticism he has received from Trump will not stop him from continuing to speak out on issues he believes in.

"Generally, my feeling is the things that I'm going to comment on are the things that I feel comfortable speaking about, things I feel well versed about," he said. "I comment a lot about gun safety. It's a cause that's very near and dear to my heart. It's very crucial for our country for our future. We face mass shootings literally every day. So I'm involved with four or five different gun safety groups. It's my pet cause. So I'm going to comment on it. It's my right. That's why I love being an American and love my country. I'm able to channel my energy and my resources to places where I want it to go. I feel really comfortable with that. There are places where I don't feel as comfortable. This would be one of them."

Kerr said he understood why some people are upset with the fact that he and some of his players have decided not to take a particular stand on what's going on in China after taking stands on various other issues, reiterating that he doesn't feel he has enough knowledge on the subject to speak on it yet.

"The same people who are asking me to stick to sports are also asking me to expand my horizons," Kerr said. "I guess that's what I'm hearing. Again, I will speak on the things I'm comfortable with. I will do things I believe are helpful for my country. I love my country, despite what President Trump said yesterday. I work really, really hard on a lot of things off the floor. One of those things is I don't want people to feel what my family felt when my father was killed. I know what it feels like to have a family member ended by a bullet. So that's a passionate, passionate subject for me. So I research it, I'm involved with various organizations, I'm constantly meeting with people, fundraising. It's part of my life.

"As far as North Korea, I don't know much about North Korea. As far as the Ukraine situation, I don't know much about the Ukraine situation. We could just go around the world and maybe I can pinpoint a couple others I'm comfortable about, but this whole thing is so ridiculous. Again, we're fortunate in this country to have free speech. I exercise that. But part of having free speech is also electing not to speak if you don't feel comfortable about something."

Kerr declined comment when asked whether he felt Morey should be fired for sending out the initial tweet.

Kerr was asked if during his various trips to China, the disconnect between the Warriors' interests in China and the country's human rights record has ever come up.

"It has not come up in terms of people asking about it, people discussing it," Kerr said. "Nor has our record of human rights abuses come up, either. Things that our country needs to look at and resolve. That hasn't come up either. None of us are perfect. We all have different issues we have to get to. Saying that is my right as an American. It doesn't mean that I hate my country. It means I want to address the issue. But people in China didn't ask me about, you know, people owning AR-15s and mowing each other down in a mall. I wasn't asked that question.

"We can play this game all we want and go all over the map. There's this issue and that issue. The world is a complex place, and there's more gray than black and white. I realize that what's popular these days is making it black and white. You're either good or you're evil. It's convenient to do things that way, but not realistic." 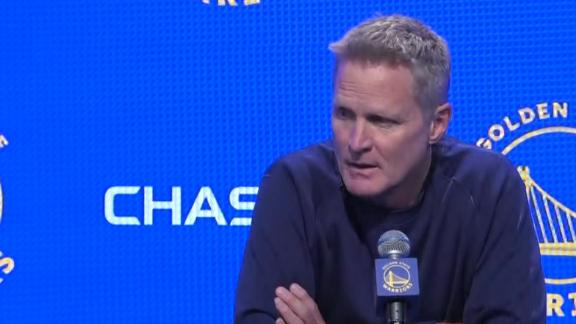 Kerr on Trump's criticism: 'I was the shiny object'
Steve Kerr responds to President Donald Trump's comments in wake of the NBA's ongoing situation in China.
Report a correction or typo
Related topics:
sportsespngolden state warriorsnba
Copyright © 2020 ESPN Internet Ventures. All rights reserved.
More Videos
From CNN Newsource affiliates
TOP STORIES
A day in the life of a preschool in SF amid COVID-19 crisis