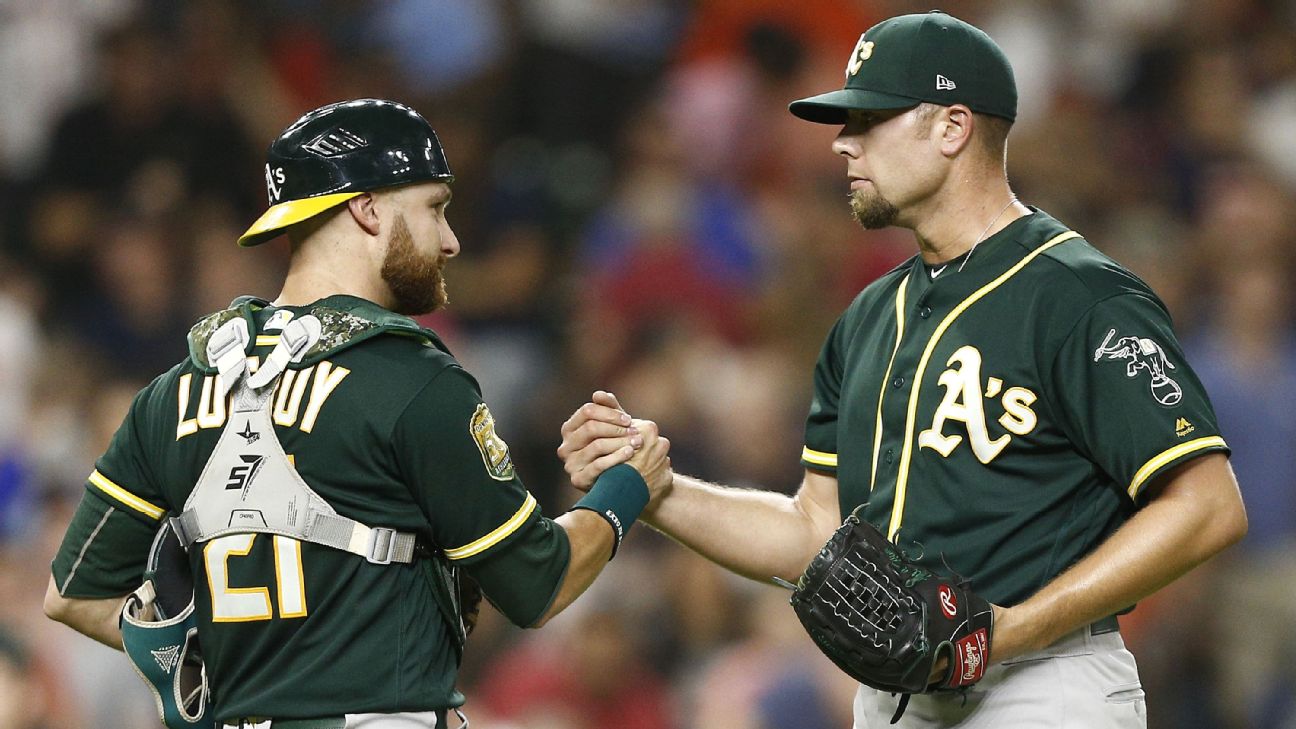 Be afraid, Seattle Mariners fans, be very afraid. The Oakland Athletics are sizzling hot, having won 17 of 21 after shutting out the Astros 2-0 on Monday, and they are only six games back for the second wild card.

That's still a comfortable lead for the Mariners, and FanGraphs gives Seattle playoffs odds of 81.6 percent, compared to Oakland's 14.6 percent, but given that the Mariners have the longest playoff drought in the majors and the A's are playing with house money, all the pressure in the second half falls on the Mariners to not fall apart.

The win in Houston was impressive, as sometimes prospect Frankie Montas -- he has been traded three times, coming to the A's from the Dodgers in the Josh Reddick trade in 2016 -- matched fastballs and zeroes with Gerrit Cole. Both threw six scoreless innings; Montas averaged 96.6 mph with his fastball, while Cole averaged 96.9. Stephen Piscotty then broke up the scoreless game with a home run off Brad Peacock.

From there, the bullpen closed things out, as Lou Trivino tossed two hitless innings and Blake Treinen recorded his 23rd save, striking out Evan Gattis with two on for the final out. The A's are 35-0 when leading after seven innings (Trivino and Treinen are a combined 12-2).

Even with that dominant, late-game bullpen, it's a minor miracle that the A's are in this position. As ESPN Stats & Information's Douglas Clawson reports:

Their over/under win total was 74 at the start of the season.

They've shuffled through 12 starting pitchers (tied for second-most in the majors).

They have the lowest payroll in the majors (yes, lower than the Marlins').

How have they climbed to 51-40? Aside from that surprising bullpen duo, mostly they've hit home runs -- the A's are fourth in the majors with 122 home runs, behind only the Yankees, Red Sox and Dodgers. Khris Davis (21) and Matt Olson (19) aren't surprises in the power department, but veteran second baseman Jed Lowrie has 16, already matching his career high, to go with a .288/.358/.504 line that perhaps should have earned him an All-Star spot over Yankees rookie Gleyber Torres.

As that late-game record and Piscotty's home run indicate, the A's have been clutch in close games. Using the "late and close" stat from Baseball-Reference, the A's entered Monday leading the majors with 24 home runs and a .791 OPS in those situations.

Their biggest find has been Trivino, a 26-year-old, 6-foot-5 rookie righty from Slippery Rock University, the school that gave us Nationals first baseman Matt Adams. Trivino had a 3.03 ERA between Double-A and Triple-A last year, with one hidden gem: He didn't allow a home run in 68 1/3 innings. Even though his fastball sits 97-98, he wasn't listed by Baseball America as one of the Athletics' top 30 prospects before the season. This season, he is 7-1 with 10 holds, three saves, a 1.34 ERA and .164 average allowed.

This team kind of reminds of the 2012 squad that came out of nowhere to go 94-68. That team also started slowly and was 37-42 through June before going 19-5 in July, 18-10 in August and 20-11 in September/October. That team also had a surprising bullpen duo in Grant Balfour and Ryan Cook, plus rookie Sean Doolittle.

Josh Hader has cooled off: The Marlins beat the Brewers 4-3 in 10 innings, scoring the walk-off win against Corey Knebel, but the big surprise came in the seventh, when Starlin Castro and Brian Anderson hit back-to-back home runs off Hader:

First time in his career he allowed two home runs in a game.

First time in his career he allowed as many as four hits in a game.

First time in his career he had a plate appearance last 11-plus pitches.

First time this season he allowed an extra-base hit with two strikes.

OK, maybe it was just a bad outing or a little rust (he hadn't pitched since July 3). But Hader has cooled off from his Mercury-like start:

Strikeout rate through May: 55.9 percent

It's interesting to note that while Hader had 12 appearances of at least two innings the first two months, he has just one in June and July (his July 3 appearance, when he threw three innings). Craig Counsell has certainly made an effort to back off a little, in part because the rest of the Milwaukee bullpen has been better (and Knebel returned from the DL).

There's no reason to panic here, but it's maybe an indicator that the Brewers need to go get a starting pitcher who can go deeper into games and take some pressure off the pen every fifth day -- you know, somebody like Jacob deGrom.

Death, taxes and Clayton Kershaw versus the Padres: Kershaw spun six scoreless innings, allowing just two hits, in an 8-2 win for the Dodgers. You know, maybe Kershaw isn't peak Kershaw anymore, but the man still has a 2.61 ERA for the season. It's almost like he has been a forgotten man this year. I think we must not forget that he's still one of the best in the game.

Oh, this was a fun moment as well:

Max Muncy will be going to D.C. regardless: He announced he'll be in the Home Run Derby. Good job, Max.

Mr. Walk-off: The Mets and Phillies split a doubleheader. Aaron Nola became the first National Leaguer to 12 wins in the nightcap. In the earlier game, Wilmer Flores did this for the Mets:

Flores now has 10 career walk-off RBIs, most in Mets history (breaking a tie with David Wright). His four walk-off home runs tie the Mets record. Since 2015, his seven walk-off hits lead all of MLB. Now about that deGrom trade ...