Venus Williams rolls into 3rd round at Melbourne despite elbow injury 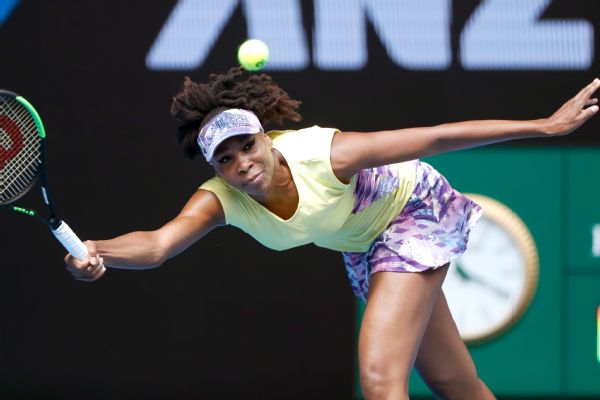 MELBOURNE, Australia -- Long lost in the wake of her sister Serena, 36-year-old Venus Williams keeps on keeping on -- to the point that we take her for granted.

Venus' 6-3, 6-2 victory over Swiss qualifier Stefanie Voegele on Wednesday in the second round of the Australian Open was her 233rd Grand Slam match win, and it came as she struggles with an elbow injury.

After the match, Venus pulled out of the doubles competition, where she was scheduled to play a first-round match with sister Serena later Wednesday.

"I'm managing it," Venus said of the injury. "I was really disappointed not to be able to play in New Zealand. I was hoping to have the capacity to play both events here, but at this point I just need to be careful and just try to maintain myself."

The Williams sisters also withdrew from their first-round doubles match in 2015 at Melbourne Park. They have won 14 Grand Slam doubles titles together, including four at the Australian Open.

Naturally, the on-court interview featured a question about her longevity.

"I have to talk about this every interview," Venus said, citing battles with Navratilova and Graf. "It's been an honor and a privilege to start that young and play this old.

"I love being here. It's a great way to start the year. Awesome."

Against Voegele, who is ranked No. 112, Williams moved freely, despite being a full decade older than her opponent. In the end, Williams' bigger, more precise strokes made the difference.

Last year, Venus went out in the first round of the Australian Open, falling to then-unheralded Johanna Konta. Now, she'll play Ying-Ying Duan, a 27-year-old Chinese player who is ranked No. 87, in the third round on Friday.

"I don't know anything about her," Venus said. "I have never seen her play. Zero, like zero. So I'm going to have to, yeah, see how it goes. Like, maybe get a scouting report in the warm-up."