Warriors vs. Trail Blazers in Game 1 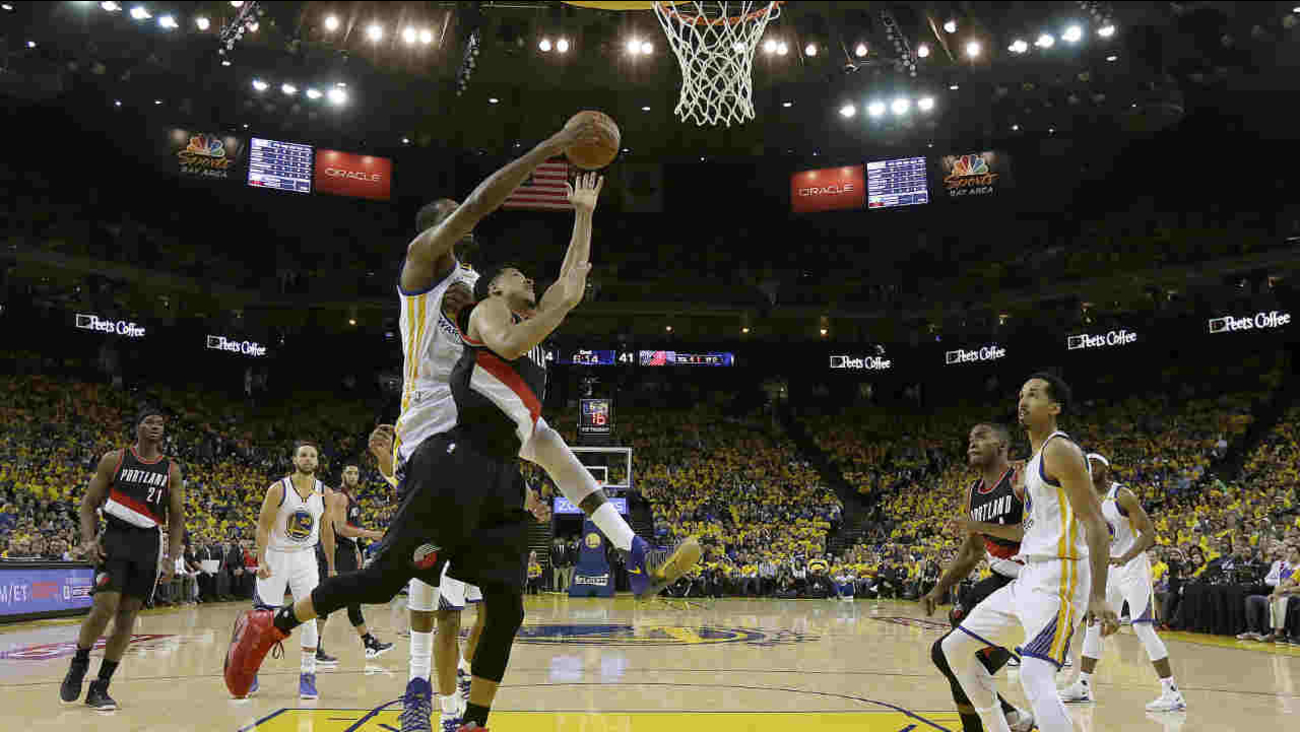 OAKLAND, Calif. -- The Golden State Warriors will seek to repeat last year's postseason march through the Portland Trail Blazers when they open a best-of-7, first-round series at home Sunday.

Golden State enters the playoffs not only as the two-time defending Western Conference champions but also a heavy favorite to make the NBA Finals for a third consecutive season as the league's top overall seed.

The 67-win Warriors dispatched the Trail Blazers four straight times during the regular season, winning twice by 23 or more points and once at Portland without Stephen Curry. But last year's 4-1 series win over the Trail Blazers in the conference semifinals was anything but a cakewalk.

The Warriors enjoyed just an 8 1/2-point average margin of victory in the series, and that included a seven-point overtime win in Portland in Game 4 when the upstart home team had the chance to tie the series at 2-2.

"I like our chances," Trail Blazers star point guard Damian Lillard boasted before his club flew into Oakland. "It's going to be an exciting series. We have a chance to go take a shot at the best team. Why not go in and shock the world?"

One of the big differences between the Warriors and Trail Blazers this season was in 3-point defense. Both teams shot well from beyond the arc, but only one defended the shot well.

The Warriors (38.3 percent) ranked third and the Trail Blazers (37.5) a comparable sixth in the NBA in 3-point shooting percentage. But while Golden State (32.4) had the best defense in the league against 3-pointers, the Trail Blazers (37.0) were better than just three teams, ranking 27th.

The clubs haven't met since Jan. 29, which means the Warriors could very well be seeing a different-looking opponent. After all, Portland was just 21-28 after a 113-111 home loss to Golden State on that date, then rallied to win 20 of its final 33 games to edge out Denver for the final playoff spot in the West.

One reason for the surge has been the addition of center Jusuf Nurkic in a trade with Denver. He averaged 15.2 points and 10.4 rebounds in 20 games before suffering a non-displaced fracture in his right leg on March 30.

Nurkic hasn't played since, and the Trail Blazers have been secretive regarding his possible availability for any part of the series.

The Warriors have prepared game plans to combat Portland with and without the big man in the lineup.

"They're a different team than the last time we played them," Warriors defensive ace Draymond Green noted after the matchup was set earlier this week. "Obviously, we don't know if Nurkic will be back or not, but they're also a different team with him not in there. They're playing with a lot more confidence. They're feeling really good about themselves."

A visit to Oakland means a homecoming for Lillard, a former standout at Oakland High. The returns rarely have had happy endings.