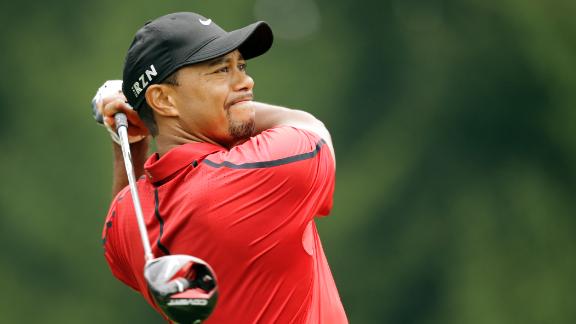 Watson told SiriusXM PGA Tour Radio he was watching the final round of the Bridgestone Invitational when Woods withdrew after hitting his tee shot on the ninth hole because of another injury to his back.

"Tiger would be a great addition to our team," Watson said. "As I've said all along, I would pick Tiger Woods if he's healthy and playing well. This doesn't bode well right now. I just hope that maybe it's just an isolated problem that he can turn around and possibly play this week at the PGA."

Woods flew home to Florida on Sunday to be evaluated. It was not clear when he would know if he could play at Valhalla, where Woods won the PGA Championship in 2000. His caddie was at the course Monday.

His agent, however, told ESPN.com on Monday that it was "way too early" to assess his latest injury and that Woods hasn't been ruled out of the PGA Championships.

Woods, in only his third tournament since returning from back surgery, said he jarred his lower back when he hopped into a deep bunker after playing an awkward shot from the slope of the bunker on the second hole at Firestone.

He tried to keep playing and hit some shockingly bad shots -- one into the water on No. 3, another on the par-3 fifth that was 65 yards short of the flag.

"I watched him play almost the entire front nine," Watson said. "And the shot he had at 5 ... I said, 'Something's wrong with Tiger.' You don't hit that terrible a shot ever -- ever. And then, of course, No. 9, he just couldn't go any farther. It concerns me because that's an injury that seems like he tried to address before and he's come back from that particular injury."

Watson said he sent Woods a text to tell him he was sorry about the injury, and "I hope you get well soon."

Woods missed two majors and three months of the season after March 31 back surgery. He has no chance of making the Ryder Cup team unless he wins the PGA Championship. If he can't play this week, that would be the end of his PGA Tour season until after the Ryder Cup.

Bob Harig of ESPN.com and The Associated Press contributed to this report.