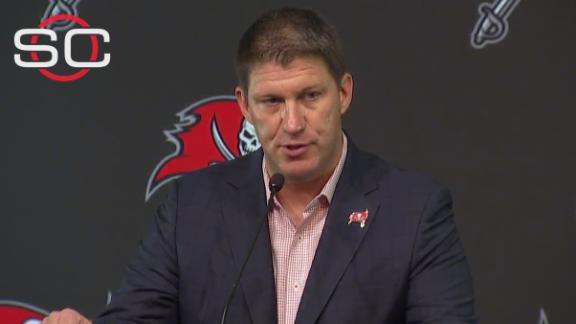 Even though Smith tripled his victory total in his second season, the Glazer family, the Bucs' owners, felt not enough progress had been made and didn't want to ask fans to wait any longer for the Bucs to become a playoff team, which is why Smith was fired late Wednesday night.

"I think when you have eight wins in two years, three home wins in two years, I think [fans have] been patient enough," Licht said during a Thursday afternoon news conference at the team's headquarters. "It does take time, but I think while you're building a good football team you can compete."

Smith had the Bucs in the playoff conversation at 6-6 in early December, but they lost their final four games to finish 6-10. That followed a 2-14 season that earned them the No. 1 pick, which they used on quarterback Jameis Winston.

That traced directly back to Smith. He hired Leslie Frazier in 2014 to be defensive coordinator but took over play-calling duties before the 2015 season opener.

According to league sources via ESPN's Adam Schefter, the Glazer family also was not happy with the high number of penalties (261, including a league-high 143 in 2015) and some of Smith's coordinator hires. Smith chose Jeff Tedford to be the offensive coordinator in 2014, but Tedford had heart problems in preseason and was out for the year. Marcus Arroyo, who had no prior NFL coaching experience, called plays that season.

Licht confirmed that Smith had been fired via phone but said that was by Smith's choice. Licht said Bucs co-chairman Joel Glazer wanted to meet with Smith on Thursday to fire him, but Smith called Licht on Wednesday. Licht said their friendship compelled him to tell Smith that the Glazers wanted to meet Thursday and that the meeting wouldn't go well.

Smith told Licht that a meeting wasn't necessary and asked Glazer to call him. After the conversation, which Licht said included Smith telling Glazer he didn't need a face-to-face meeting, Smith went into the team facility late Wednesday night and cleaned out his office.

"All I'd say is a football decision was made that we thought was best for the future of the franchise," Licht said. "I understood the decision after conversations.

"Once again, deep respect for Lovie as a football coach, but we felt this franchise needed a new face, a new coach, to get us back to winning."

That could be offensive coordinator Dirk Koetter, who just finished his first season with the Bucs. Koetter helped guide Winston to one of the best seasons by a rookie quarterback in NFL history. Winston completed 58.3 percent of his passes for 4,042 yards with 22 touchdowns and 15 interceptions, making him just the third rookie quarterback to surpass 4,000 yards (Cam Newton and Andrew Luck).

The Bucs offense ranked fifth in rushing -- thanks to Doug Martin'sfinishing second in the NFL in rushing (1,402 yards) -- 17th in passing and fifth overall in Koetter's first season.

Licht called Koetter a strong candidate but denied that several teams requesting permission to speak with Koetter about head-coaching openings -- including Miami and San Francisco -- had any impact on the decision to fire Smith.

"He's put a good rsum in front of him this year," Licht said. "Historically the best offense we've had here in Tampa Bay. He's a good communicator. He's done great things with Jameis. There's a lot of good football coaches out there, and Dirk is one of them."

Licht: Bucs are committed to finding the right coach
Buccaneers GM Jason Licht explains how the organization has been patient enough, which led to the firing of coach Lovie Smith, and how he considers Dirk Koetter "a strong candidiate" to become the next coach.