KABC
By Carlos Granda
LOS ANGELES -- A video shows a 92-year-old man on the ground with a bloody face after he was attacked by a woman and several men with a brick in the Willowbrook neighborhood of Los Angeles.

The attack has left neighbors stunned.

L.A. County Sheriff's investigators said the victim was attacked near the corner of 118th Street and Central Avenue. An eyewitness who took the video did not want to be identified. She said the man was beaten with a piece of concrete.

According to the eyewitness, the man was walking down the sidewalk and he passed the woman. The witness said for some reason that upset the woman and that's when it started.

"The woman pushed him and dropped him. She took the block of concrete and hit him in his head many times. That's why it was very bad," the witness said.

She was able to get a picture of the woman who was walking with a little girl. In that photo, she is seen holding a piece of concrete.

"She see me in my car and walking to me and she told me, 'Oh, what are you doing? What are you saying? Why are you taking my picture?'" the witness said.

Detectives from the Sheriff's Department interviewed the victim and they are looking for witnesses to come forward.
Report a correction or typo
Related topics:
los angelessearchattackman attackedelderlybeatingcaught on videoseniorssenior citizens
Copyright © 2020 KABC-TV. All Rights Reserved.
ATTACK 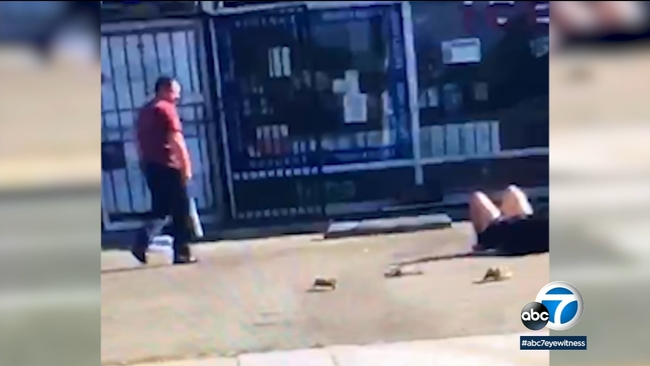