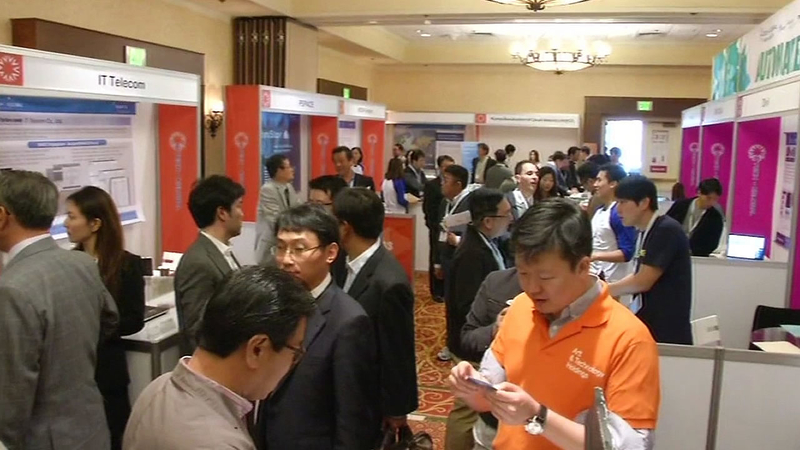 SANTA CLARA, Calif. (KGO) -- There is a good chance you are watching television or movies on a screen that was made in Korea. The country that has become such a powerhouse in television and mobile phone technology is also becoming a bigger presence in the Bay Area. ABC7 News went to the Korean technology expo K-TECH in Silicon Valley.

We looked at a tiny headset that is not noise canceling. It doesn't need to be because it picks up the sound of your voice through your ear canal, and can block the outside noise perfectly.

The headset device is part of a room full of tomorrow's mobile technology on display from Korea at K-TECH.

We also looked at a wearable credit card terminal that works both for the magnetic card or IC card. You can slide it along the device or insert the card to read the internal chip.

There were also devices such as a keyboard as thin as paper and soon there could be flexible phones.

But onstage at the conference, the talk isn't phones it's robots.

3D Robotics Vice President David Merrill "The mobile industry is driving the cost out of so many components that become useful to robotics and drones."

Some of those components are 3D cameras because robots use them to navigate. And soon phones will use 3D cameras to video chat over any background you want.

The K-TECH conference has grown bigger this year, in part because Korea's presence in Silicon Valley has grown. In fact, for the first time this year, some of those companies aren't just here looking for business partners, they're looking for employees.

Korean companies like Samsung and LG are putting down roots in the Bay Area. There are 400 applicants at the conference vying for 30 jobs. And there are also immigration attorneys.

The job fair, and the conference are sponsored by Korea's government. They want to work together with Americans on a problem both countries face -- an aging population.

"Helping the elderly is going to be the driving thing in robotics. There's going to be a tremendous demand as Baby Boomers like me get old, so that we can retain our dignity and our autonomy longer," Rethink Robotics founder Rodney Brooks.
Related topics:
technologysanta claratelevisionsamsungsouth koreasilicon valleycellphonelgcredit cardssmartphonesjobs
Copyright © 2021 KGO-TV. All Rights Reserved.
More Videos
From CNN Newsource affiliates
TOP STORIES