Which are the worst U.S. states for teen drivers who text and drive?

KTRK
By Melanie Lawson
A new survey finds more than one in three, or 38 percent, of teen drivers in the U.S. say they text while driving.

Of the 35 states in the study, South Dakota had the highest rate of teens texting and driving, with 64% of high school students admitting they'd engaged in risky driving behavior at least once in the previous month.

In fact, researchers said the top five highest driving while texting states (South and North Dakota, Montana, Wyoming, and Nebraska) were rural states with a high percentage of high school student drivers who could get their learner's permit before age 15. Maryland, on the other hand, had the lowest rate, at only 26 percent.

Texas was not included in the survey.

The study was done by the Center for Injury and Research at Nationwide Children's Hospital, and researchers analyzed data from teen drivers aged 14 and older. The rate was 20% in states where drivers could get a permit at 14, as compared to 13% in states where the driving age started at 16.
Researchers also found that the more risky driving behaviors a teenager took part in, the more likely they were to text and drive.

Teens who didn't wear seatbelts, for instance, were over a fifth more likely to text while driving. And those who drank alcohol and drove were almost twice as likely.

Parents, too, had an effect when it came to keeping kids safer on the roads. Teens who watched their parents text and drive were far more likely to do so themselves.

In addition, race and ethnic background appeared to play a role. White teens were more likely to text and drive at 19%, while black and Hispanic young people did so at a rate of 12% and 11%. And not surprisingly, texting and driving were much less likely to happen when there's an adult in the car.

Researchers noted that the results are so concerning because distracted driving has been shown to increase the risk of a crash by up to nine times. And it's not just dangerous, it's also against the law in 34 of the 35 states surveyed.

Percentage of high school students aged 14 years and up texting or emailing while driving by state, according to the Youth Risk Behavior Survey, 2015 Police officer caught on video texting and driving in Texas 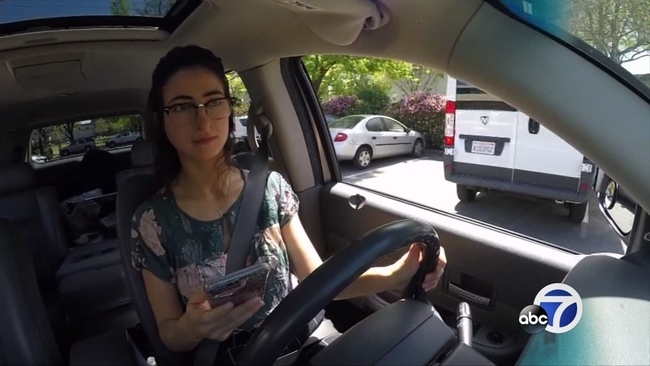