Tanner Perren, 19, was airlifted to safety with a broken foot and injuries to his lower back.
KGO 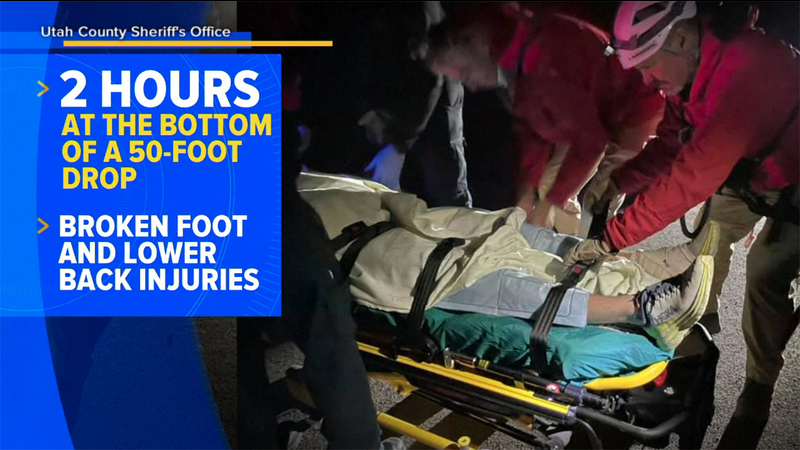 PROVO CANYON, Utah -- A teenage hiker who plunged 50 feet from a waterfall in Utah was rescued after being trapped for two hours -- and miraculously suffered only minor injuries.

Tanner Perren, 19, said he now knows he was in over his head when he and his friend hiked to check out the stunning scenery at Provo Canyon's Bridal Veil Falls, located about 40 miles southeast of Salt Lake City.

After a glimpse of the sunset, they started climbing down the waterfall as day turned to night.

"I realized how dangerous it was, and I thought we could get off the mountain safely, but there was no way," Perren said.

While crossing a rocky and wet creek bed, Perren lost his footing and fell.

"I kept thinking, 'He'll stop. He'll stop,'" said Perren's friend, Mariah Miller. "And then he went over the edge and over another edge, out of sight."

At the bottom of the ravine, Perren used his flashlight to signal that he was OK.

"I tried to stand up and I did. And then I put weight on my foot, and I was just mushy," he said.

Miller carefully made her way down and called 911.

The Utah County Sheriff's Office dispatched the state's department of public safety, which used a helicopter to pluck Perren from the treacherous terrain.

"I was like, 'Hallelujah, I'm about to get off this stupid mountain.' I was so excited," he said.

He was then airlifted to the hospital and treated for a broken foot and injures to his back.

Justin Gordon, with the Utah County Sheriff's Office, said Perren is lucky to be alive.

"He stopped about four feet short of tumbling off another cliff, which probably would have been a fatal fall ... so don't just head up there with no gear and on your own with no knowledge of what you're doing," he said.